USD/JPY Spikes Higher Following Yellen and Kuroda, US PCE Next

- USD/JPY easing some pressure from Japanese officials by gaining some distance from 100.00

- Immediate resistance appears to be 102.50, but a c hannel breakout might be required for more bullish conviction

The USD/JPY is approaching a potential near term resistance level at 102.50 at the time of writing, after the pair spiked higher following the Yellen and Kuroda speeches at Jackson Hole.

The Fed Chairwoman said that “the case for an increase in the federal funds rate has strengthened in recent months”, leading to a rise in near term Fed rate hike speculation, while BOJ Governor Kuroda said the central bank will not hesitate to expand stimulus if needed, emphasizing the divergent monetary policy paths of the two central banks.

Looking ahead, US PCE might provide further grounds for rates speculation, while Japan’s jobless rate is also set to take place heading into Asia.

July’s US PCE figures are set to hit the wires 12:30 GMT. The Fed’s favored inflation gauge is expected to tick down to 1.5% from the prior 1.6% in the core figure.

The market usually pays more attention to the CPI figures, but given the perceived “fertile ground” for Fed rate hike bets in the context of the Yellen speech, the numbers may get more attention this time. With inflation being the “missing piece” for the Fed’s dual mandate, a higher than expected reading could add to near term rate hike bets, further assisting this latest US Dollar push.

Japanese July Jobless Rate is set to be released later on as well, and is expected to remain unchanged at 3.1%.

The Yen has been relatively unfazed by recent key domestic data, perhaps as the market assumed the BOJ might be running out of options to ease policy further.

Against this backdrop, it will be interesting to see if the recent comments by Kuroda could see the market looking at intrinsic weakness in the Japanese economy as a sign of higher probability of easing down the line.

With COT data showing positioning is heavy long the Yen, continued US Dollar strength might gain fuel on short covering as well.

In turn, this may suggest that break out type trades might be appropriate ahead. 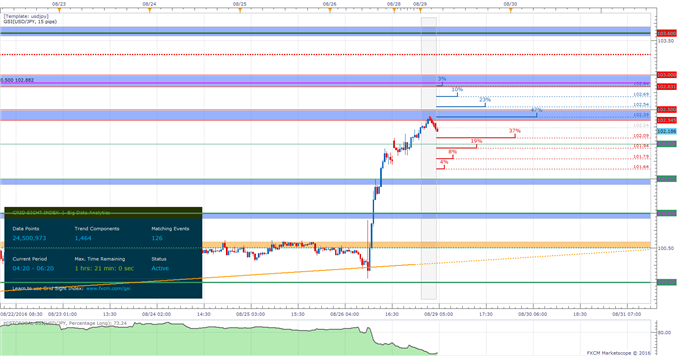 The USD/JPY is trading beneath a potential resistance zone below 102.50 at the time of writing, with GSI calculating higher percentage of past movement to the upside in the short term.

Meanwhile, the DailyFX Speculative Sentiment Index (SSI) is showing that about 73.2% of traders are long the USD/JPY at the time of writing; reducing shorts quickly on the move higher, perhaps implying that retail traders are taking profits/ positions off too quickly (see the “Traits of Successful Traders” research).