- EUR/USD recovery continues as the pair trades above 1.13 following the FOMC minutes

- Euro-Zone CPI and ECB minutes are ahead, but Fed bets seem to be the driver at the moment

- The Euro was unable to sustain gains above 1.14 in the past attempts

The pair is approaching an area of resistance that proved key in the past between 1.1400-1.1430, with past approaches unable to sustain gains.

Looking ahead, Euro-Zone CPI and ECB meeting minutes take center stage in European trading hours, and another round of Fed speak is set to hit the wires later on as well.

Euro-Zone Final July CPI readings are set to hit the wires 09:00 GMT. Headline CPI is expected to print 0.1% year-on-year, while Core CPI is anticipated to remain at 0.9%. The data seems set to indicate once again the huge task in front of the ECB if they are to bring inflation back close to 2%.

In their latest policy meeting, the ECB kept policy at status quo as it appears Brexit spillover effects are contained for the economy at the moment. This seems to have allowed the ECB to remain on hold for now, possibly implying limited response on today's minutes.

Indeed, the Euro does appear “driver-less” at the moment, but directional conviction may be found elsewhere.

The driver for the pair does seem to be the ebbs and flows on Fed rate speculation at the moment.

Yesterday’s FOMC meeting minutes appeared to have been interpreted as reducing the possibility for a rate hike (based on Fed funds futures), possibly due to a somewhat divided outlook within the committee.

This seems likely to have participants focus on the commentary by John Williams and Bill Dudley ahead, as their latest comments seemed to have sent the US Dollar in opposite directions.

Based on the fact that the market has reduced bets on imminent tightening after yesterday’s minutes, Dudley might try to further drill a message that the market is underpricing potential hikes. Williams’s commentary reflected concerns that could potentially be further down the line, which may imply that odds are slightly skewed for a turn higher in the US Dollar based on those speeches in isolation.

We use volatility measures as a way to better fit our strategy to market conditions. The EUR/USD is seeing subdued levels of volatility lately (based on 20-day ATR readings), despite the pickup in activity this last couple of days.

In turn, this could imply that range bound trading plays might be appropriate ahead around more macro levels. 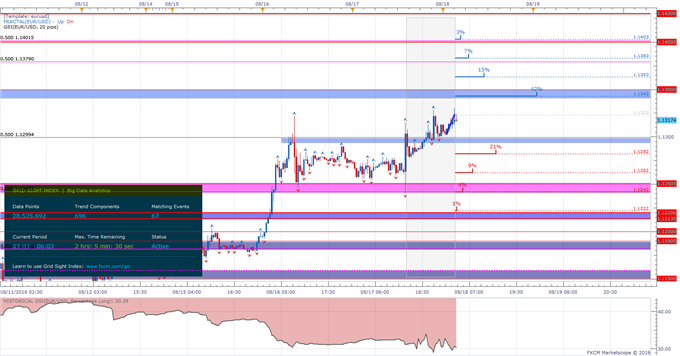 The EUR/USD is trading above potential support around the 1.13 level at the time of writing, with GSI calculating significantly higher percentage of past movement to the upside in the short term.

Meanwhile, the DailyFX Speculative Sentiment Index (SSI) is showing that about 30.39% of traders are long the EUR/USD at the time of writing, most short since the May top, and on the wrong side of the move higher, apparently trying to pick the top. The SSI is mainly used as a contrarian indicator but in range bound trading conditions extreme retail trades positions might indicate an imminent top.