NZD/USD In the Spotlight With the RBNZ Rate Decision Ahead

- A rate cut is highly expected, perhaps shifting focus to the accompanying statement and the bank’s tone

The NZD/USD continues to push higher after finding support below the 0.71 handle following a decline on Friday’s upbeat US NFP report.

The push higher could reflect pre-positioning ahead of the RBNZ rate decision, which shifts our attention to possible market reaction on the news.

We highlighted recently the possibility for the Kiwi to find support as the NZD still carries one of the more attractive yields at a 2.25% Official Cash Rate, which could imply that in a record low rates environment the currency might remain supported on a search for yield basis.

Heading into today’s decision, the market is pricing in a 99% probability of a cut (according to swaps), which could help explain the currency’s appreciation lately, potentially on pre-positioning, as even a 2.0% rate looks attractive in the current environment.

In their latest rate decision, the RBNZ said that “the exchange rate is higher than appropriate” and “is holding down tradables inflation”, while a lower New Zealand dollar would raise tradables inflation. The bank also emphasized that they "expect a depreciation in the currency".

This might paint the picture of a central bank that wants to see its currency lower, and inflation higher, but is potentially limited in its scope to cut rates on increasing risk of house pricing inflation, which seemed to have nudged the central bank to broaden LVR limits.

Against this backdrop, with a rate cut basically priced in, a 0.25bps move might potentially see the Kiwi trade higher, as it did with the AUD/USD in the manner we suspected.

A surprise, but possible, cut by 0.50bps seems likely to see the pair trade lower.

With that said, the effects of this latest move on loans is still unknown, which puts a question mark on the bank’s ability to go all out on rate cuts going forward, so a 0.25 bps cut today with a dovish statement hinting at further cuts down the line might potentially be the likely scenario.

If the market doesn’t buy into RBNZ dovishness, the Kiwi may trade higher, possibly limited to some extent on pre-positioning heading into the event.

Suffice it to say, an unlikely hold in rates seems likely to send the Kiwi surging. 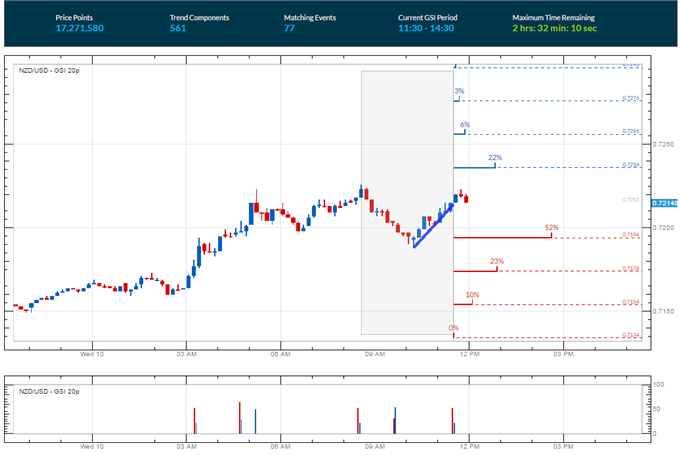 The NZD/USD is trading around the 0.7216 level at the time of writing (see chart below), with GSI calculating significantly higher percentage of past movement to the downside in the short term.

We use volatility measures as a way to better fit our strategy to market conditions. The NZD/USD is seeing slightly reduced levels of volatility (on 14-day ATR study). In turn, this could imply that range bound trading plays might be appropriate, but the RBNZ rate decision could see this situation change rapidly. 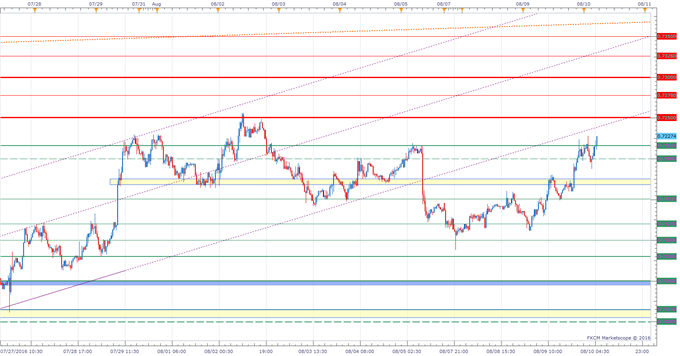 The NZD/USD is trading higher and the next big level of resistance appears to be the 0.7250 level, which proved key in the past.

We generally want to see GSI with the historical patterns significantly shifted in one direction, which alongside a pre-determined bias, and other technical tools could provide a solid trading idea that offers a proper way to define risk.

We studied over 43 million real trades and found that traders who successfully define their risk were three times more likely to turn a profit.

Meanwhile, the DailyFX Speculative Sentiment Index (SSI) is showing that about 31.8% of traders are long the NZD/USD at the time of writing, apparently trying to pick a top. The SSI is mainly used as a contrarian indicator implying further strength ahead.