- USD/JPY trading sideways around the 101 handle

The USD/JPY is trading sideways around the 101 handle in the last couple of trading days after sinking lower following perceived disappointments from the BOJ monetary policy announcement and the Japanese new fiscal stimulus plans.

This short term sideways congestion puts the focus firmly on the US NPFs later today for a possible range break catalyst.

The May and June figures saw a huge miss and beat to expectations respectively. This makes today’s numbers seem even more of an unknown. The context, as it relates to the US Dollar, might be what the figures could imply on the backdrop of Friday’s huge 2Q US GDP disappointment.

A huge beat to expectations (preferably with a beat in wage growth as well) might shift sentiment to a more upbeat tone on the US economy, and seems likely to send the US Dollar higher.

The opposite appears likely to paint a gloomy picture after Friday’s GDP figures and could potentially send the US Dollar tumbling.

With that said, the more interesting scenario here from an actual trading perspective might potentially be a slight beat to expectation or numbers generally in line with consensus. In this scenario, an initial knee-jerk positive US Dollar reaction might provide more favorable prices for sellers looking into the general USD/JPY longer term downtrend in the context of lower than expected US growth, reduced Fed rate hike bets and limited scope of further stimulus in Japan. 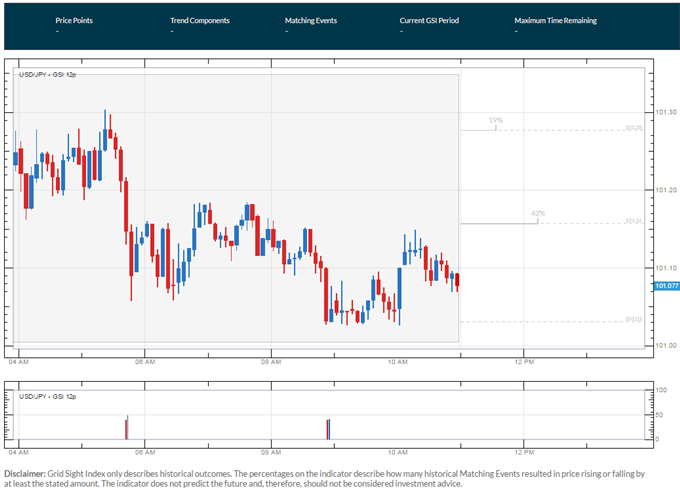 The USD/JPY is trading above prior support at 101.00 at the time of writing, with the last two GSI readings calculating about even percentage of past movement to either side, which is generally in line with the short term sideways trend. The GSI indicator above calculates the distribution of past event outcomes given certain momentum patterns, and can give you a look at the market in a way that's never been possible before, analyzing millions of historical prices in real time. By matching events in the past, GSI describes how often the price moved in a certain direction.

We use volatility measures as a way to better fit our strategy to market conditions. The Yen is expected to be the second most volatile currency versus the US Dollar on a 1-Week implied volatility basis (after the British Pound). This is understandable given the unfolding events in Japan, FX intervention risk and possible influence of today’s figures. In turn, this could imply that breakout type trades might be preferable in the short term. 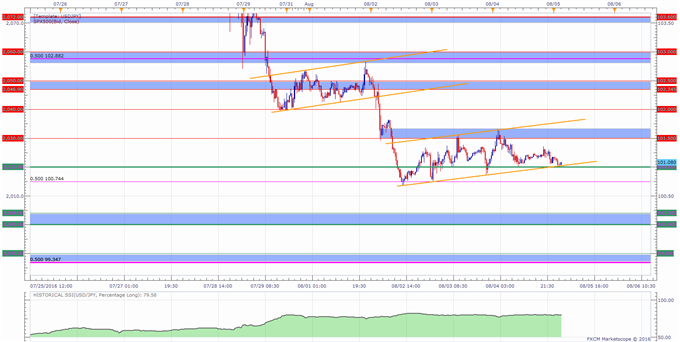 The USD/JPY is trading in a downtrend with the pair currently confined in a technical trading channel usually seen as a corrective phase. This could imply that the pair is poised for a break to the downside but NFPs could change the picture quickly to either direction for a technical break.

Meanwhile, the DailyFX Speculative Sentiment Index (SSI) is showing that about 79.5% of traders are long the USD/JPY at the time of writing, on the wrong side of the latest down leg from around 107. The SSI is mainly used as a contrarian indicator implying possible further weakness ahead.