The GBP/USD has settled in a relatively narrow trading range for the last couple of trading days, with the pair seeing most trading done between 1.3150 to the 1.31 handle.

Key event risk ahead in the likes of UK 2Q GDP and the FOMC rate decision might see the pair significantly more volatile as we approach a jam-packed economic calendar in the days ahead.

UK Advance 2Q GDP figures are set to hit the wires 08:30 GMT to start what could be a volatile ride for the pair in the days ahead on a heavy economic docket. Expectations are for a 2.1% growth print in 2Q year-on-year, higher than the prior 2.0% figure.

The figures represent the state of the UK’s economy heading into the Brexit referendum, which could prove significant with a possibly deteriorating economic outlook after Brexit.

Indeed, we have seen MPC members such as Weale (who appeared to lean on a “wait and see approach” for the next BoE rate decision) saying that Friday's weak PMI figures are the best short-term indicator that the bank has at the moment, and could prove significant for the rate decision next week. This could imply that even the more cautious MPC members are leaning in the direction of a cut next week. Consequently, weaker than anticipated 2Q GDP figures could amplify the more pessimistic narrative for the economy.

US June Durable Goods Orders are on the docket as well, and may see a short burst of volatility, but appear unlikely to have significant follow through as participant might hold back before committing to directional US outlook before the FOMC Rate Decision.

The FOMC rate decision is expected to show that the central bank opted to keep policy at status quo, with the market pricing a mere 10% probability of a rate hike. This might indicate that focus could be put on the Fed’s monetary policy statement. Comments on global headwinds, and particularly the Brexit situation might be in focus. If the market interprets that the Fed are looking domestically, with US data firming lately, this may be interpreted as more hawkish. A perceived hawkish statement (on the backdrop of other central banks heading in the opposite direction) could see the US Dollar trade higher on firming rate hike bets. 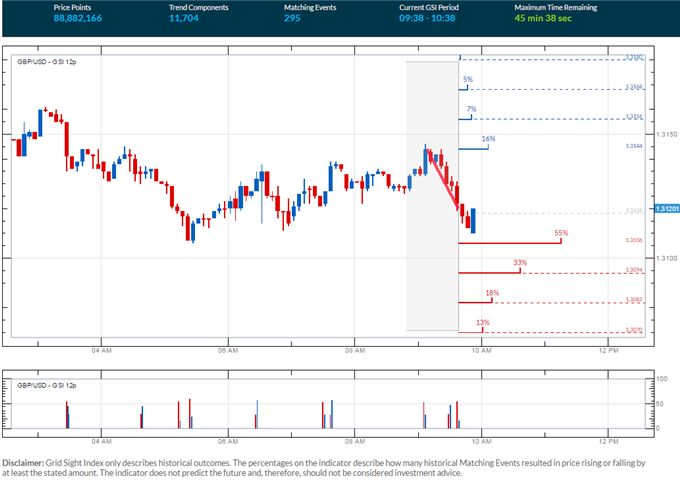 The GBP/USD is approaching possible support at 1.31 (see chart below), with GSI calculating higher percentage of past movement to the downside. The GSI indicator above calculates the distribution of past event outcomes given certain momentum patterns, and can give you a look at the market in a way that's never been possible before, analyzing millions of historical prices in real time. By matching events in the past, GSI describes how often the price moved in a certain direction.

We use volatility measures as a way to better fit our strategy to market conditions. The British Pound has seen volatility reduce lately from record highs on the Brexit vote. With that said, the currency remains likely to see further erratic movements as the Brexit situation develops, and volatility might increase with the event risk on the docket. In turn, this could imply that breakout and trend oriented plays may be appropriate ahead.

The GBP/USD is trading sideways heading into the scheduled event risk, with the pair seeing most trading done between 1.3150 to the 1.31 handle. A clear break below the area of support starting from 1.31 could put the focus on possible support levels on the round 00s and 50s which proved significant since the Brexit decline.

Meanwhile, the DailyFX Speculative Sentiment Index (SSI) is showing that about 61.9% of traders are long the GBP/USD at the time of writing. The SSI is mainly used as a contrarian indicator, implying weakness ahead.