NZD/USD Remains Offered Below 0.70 But Key Event Risk Lie Ahead

- NZD/USD trading below the 0.70 handle at the time of writing

The NZD/USD continues to trade below the 0.70 handle in early London trading hours, but a week full of key event risk might see the sharp decline in the pair come to a halt.

The New Zealand Trade Balance figures are the initial main event risk on the docket for the Kiwi, but FOMC and US 2Q GDP figures seem likely to shake things up further later this week.

New Zealand’s June Trade Balance Figures are set to hit the wires 22:45 GMT. The country is expected to print a surplus of NZ$127M from a prior print of NZ$358M. A surprise beat to expectations might clash with current dovish sentiment for the Kiwi this week.

The recent sharp decline in the Kiwi appears to be on the backdrop of rising RBNZ rate cut speculation. In an update of economic assessment, the RBNZ said that easing could be required to ensure inflation meets the bank’s target range. In turn, this led to the Kiwi diverging from a binary risk on/off correlation lately, as participants started to price possible underlying weakness for the currency.

Adding to the mix are rising Fed rate hike bets as of late, that seem to have contributed for the sharp decline in the pair. This theme is likely to be in focus this week with FOMC and US 2Q GDP figures later this week.

With that said, the NZD still carries one of the more attractive yields at 2.25% Official Cash Rate, which could imply that in a record low rates environment the Kiwi might remain supported on a search for yield basis. Adding to a possibility of such a scenario is the fact that the RBNZ may be limited in its scope to lower rates on increasing risk of housing prices inflation, which seemed to have nudged the central bank to broaden LVR limits.

Taking this into consideration, with the market already pricing in a significant probability of a rate cut in the next RBNZ meeting, positive data that clashes with current market sentiment, and/or a miss to US GDP figures could potentially see that NZD/USD trade higher in the days ahead as the yield differential theme comes back to focus.

Suffice it to say, positive US data and more hawkish Fed rhetoric appears likely to send the US Dollar higher. 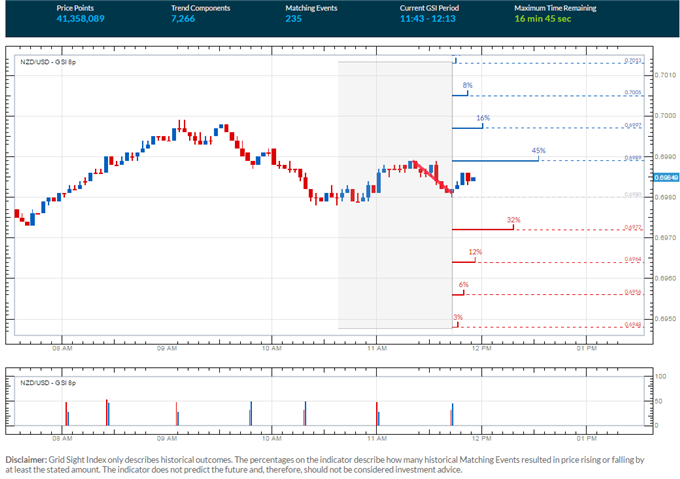 The NZD/USD is trading sideways at the time of writing, with GSI calculating slightly higher percentage of past movement to the upside. The GSI indicator above calculates the distribution of past event outcomes given certain momentum patterns, and can give you a look at the market in a way that's never been possible before, analyzing millions of historical prices in real time. By matching events in the past, GSI describes how often the price moved in a certain direction.

We use volatility measures as a way to better fit our strategy to market conditions. The NZD/USD has seen a sharp decline this past two weeks, and looking at the packed economic docket, volatility seems likely to increase. In turn, this could imply that breakout and trend oriented plays might be appropriate ahead.

Meanwhile, the DailyFX Speculative Sentiment Index (SSI) is showing that about 51.47% of traders are long the NZD/USD at the time of writing, after flipping net long last week. Judging by the price action and the SSI swings, it appears traders might be starting an attempt to pick a bottom.