GBP/USD Levels Ahead of The BoE Financial Stability Report

- GBP/USD trading around the 1.32 handle after a swift decline in early London trade

The GBP/USD is trading around the 1.32 handle after seeing some pressure in early London trading hours. The British Pound has been consolidating versus the US Dollar since the “Brexit” decision, which seems set to be the main talking point of the day.

The BoE Financial Stability Report is set to hit the wires today followed by a speech from Governor Mark Carney. The report and the following speech could be scrutinized as the market tries to gauge directional clues after the referendum.

The BoE Financial Stability Report is set to hit the wires 09:30 GMT. The release will be followed with a speech by Carney and Q&A 30 minutes after the initial report is released.

The Bank of England's Financial Policy Committee (FPC) is required to publish a Financial Stability Report twice a year. The Report covers the Committee’s view on the stability in the UK’s financial system. The event today is important because the entire concern from the “Brexit” scenario was its possible influences and effects on financial stability, and this report represents the official view of the BoE to those possible risks.

The FPC might take some forward looking action today and lower the capital requirements from banks, by using measures such as the so called “countercyclical buffer” which could see a reduction to 0.0%, thus reversing the March decision to increase the buffer to 0.5%.

Another possible action by the FPC today could potentially be extending the period of the funding for lending scheme (FLS for short) which was first introduced four years ago to provide cheap loans to banks in return to them lending it to the real economy.

Both events could see some volatility, especially if Carney speaks of possible BoE and treasury measures down the line. 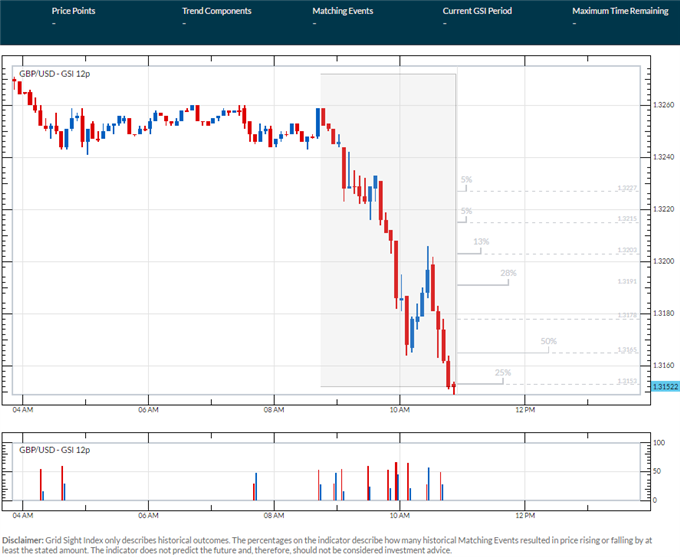 The GBP/USD has seen a hold after the break below the 1.32 handle. If price returns to the level, traders could use the GSI to see how price reacted in the past given a specific momentum pattern. The GSI indicator calculates the distribution of past event outcomes given certain momentum patterns, and can give you a look at the market in a way that's never been possible before, analyzing millions of historical prices in real time. By matching events in the past, GSI describes how often the price moved in a certain direction.

We use volatility measures as a way to better fit our strategy to market conditions. With “Brexit” firmly in the headlines today, volatility might pick up for further price swings. In turn, this may imply that breakout type trades are generally preferable today. 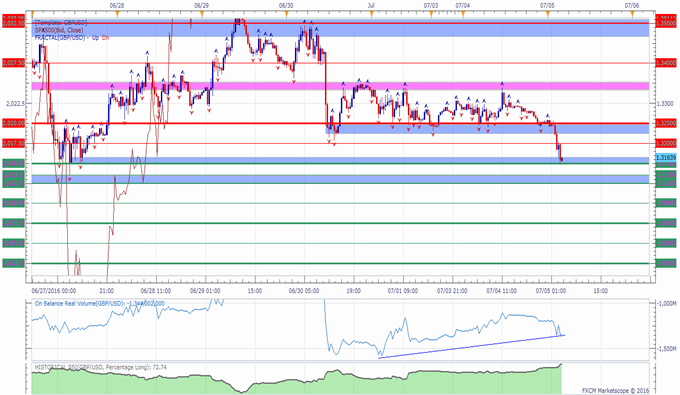 The GBP/USD is trading at a prior support level/zone around the 1.3150 figure. Further short term levels of interest on a move lower might be a potential support area above the 1.31 handle followed by the round figures (00/50s) on a downside swing.

Meanwhile, the DailyFX Speculative Sentiment Index (SSI) is showing that about 72.4% of traders are long the GBP/USD at the time of writing. Retail traders flipped net long after the “Brexit” decline, apparently trying to pick a bottom.The SSI is mainly used as a contrarian indicator, implying a further weakness ahead for the pair.