- German CPI, US PCE and the European Council Meeting in focus today, but doubts remain on short term influence

The EUR/USD is trading sideways as the pair continues to fluctuate in perceived indecision following the “Brexit” vote. Indeed, long term implications for the Euro following the referendum appear significant, but with those implications still very unclear it seems that the pair might be in a “wait and see mode”, while short term technical signs are suggesting something may be brewing below the surface.

Looking ahead, German CPI and US PCE figures headline the economic calendar, and the second day of the European Council meeting could provide further news on “Brexit”. Question marks remain on short term market moving impact of economic indicators following the referendum, but caution might be warranted.

The Second Day of the European Council Meeting is set to be held throughout the day. The first day saw some views expressed by the members of the council, but didn’t provide policy specifics, which could suggest reduced market moving influence today as well.

German Flash Consumer Price Index headlines the docket in European trading hours. The June year-on-year figure is expected to show an uptick to 0.3% from the prior 0.1%. The figure is key to understanding the current inflation pressures in the Euro-Zone’s largest economy, which is significant in the context of the ECB fighting deflationary pressures.

US May PCE figures are set to be released later as well. The core year-on-year print is expected to remain unchanged at 1.6%. The Fed uses a measure of inflation derived from the PCE as their primary gauge of inflation which makes this a key event risk to watch due to possible influence on monetary policy actions.

Both those economic indicators are of high significance for their implications to monetary policy, but it seems likely that monetary policy may be put to the side in this current trading environment, as risk trends take center stage in the aftermath of the “Brexit” decision. 10-day correlation between the EUR/USD and the SPX 500 currently stands at 94% after the US Dollar’s “safe haven” status appears to have been reignited following the decision.

With that said, the current “quiet” period in the pair as opposed to higher probabilities of volatile reactions because of the “Brexit” situations might make for ripe condition for significant price swings. 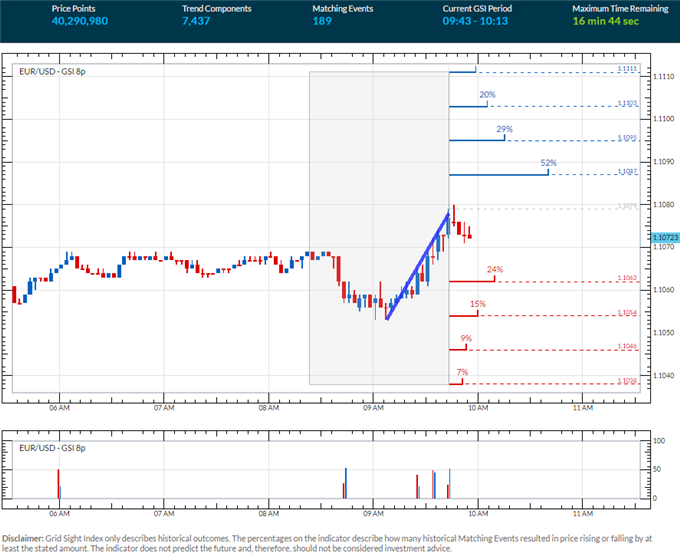 The EUR/USD is seeing some upside movement alongside SPX 500 futures, as we approach London open. The GSI indicator above shows that in 52% of similar past momentum patterns, the pair saw further positive momentum. The GSI indicator calculates the distribution of past event outcomes given certain momentum patterns, and can give you a look at the market in a way that's never been possible before, analyzing millions of historical prices in real time. By matching events in the past, GSI describes how often the price moved in a certain direction.

We use volatility measures as a way to better fit our strategy to market conditions. The current “quiet” period in the pair as opposed to higher probabilities of volatile reactions because of the “Brexit” situations might make for ripe condition for significant price swings. In turn, it may imply that breakout type trades are generally preferable in the short term.

The EUR/USD is attempting a break higher from a well-defined triangle congestion. While the pattern usually implies a continuation, a couple of technical signals pointed to the upside. First, notice how the SPX 500 continued to move to the upside while the EUR/USD traded slightly lower (with a 94% 10-day correlation). Second, the OBV showed more buying pressure than was being indicated in price action. Third, the GSI showed that past events saw continued momentum higher.

Follow through is the question now, and it might be limited as the macro picture may imply that a correction higher could see a continuation of the downtrend.

Meanwhile, the DailyFX Speculative Sentiment Index (SSI) is showing thatabout 45.4% of traders are long the EUR/USD at the time of writing. Retail traders flipped net short yesterday as the price turned higher, apparently trying to sell the pullback.