USD/CAD Event Risk Ahead, but Brexit Might Dictate Action

- USD/CAD pivoting around the 1.28 handle after dropping on an apparent “risk on” environment lately

The USD/CAD is pivoting around the 1.28 handle, after a move down to the level from the end of last week. The Canadian Dollar's advance appears to have coincided with strength to other sentiment linked currencies, which was likely reinforced by polls over the weekend that seemed to favor the “Remain” side in the upcoming UK EU referendum.

The market seems completely absorbed by “Brexit” sentiment swings, which might imply that event risks, like the upcoming Yellen testimony and Canada’s retail sales could have less market moving influence in the short term.

Canada’s Retail Sales is expected to print a 0.8% increase in April versus a prior -1.0% drop. Canadian data has impressed for most of the year, but the proximity to the “Brexit” referendum might imply that the possible movement of the sentiment linked currency could cause participants to hold back on clear directional bets before the outcome of the EU Referendum is known.

Last week, the Canadian Dollar seemed to be more influenced by risk trends than the CPI data, which might see the market focus more on the Crude Oil Inventories figure.

The 10-day correlation between Crude Oil and USD/CAD is an impressive -0.9 at the time of writing. We will look to see the market’s reactions to the change from the prior -933K print. A volatile response in Crude Oil prices to the figure could potentially see a short term corresponding move in the pair, but follow through may be limited on the aforementioned “Brexit” considerations.

US Housing data is also on the docket. Existing Home Sales is expected to show a rise of 0.9% in May versus a 1.7% prior increase. However, the data may be brushed aside as eyes might be on the Monetary Policy Testimony by Janet Yellen.

Yellen acknowledged yesterday that a “Brexit” scenario poses a significant economic risk that could impact the US. Taking this into consideration, this might suggest that monetary policy speculation won’t have a significant market moving influence in the short term as we brace for the “Brexit” referendum. 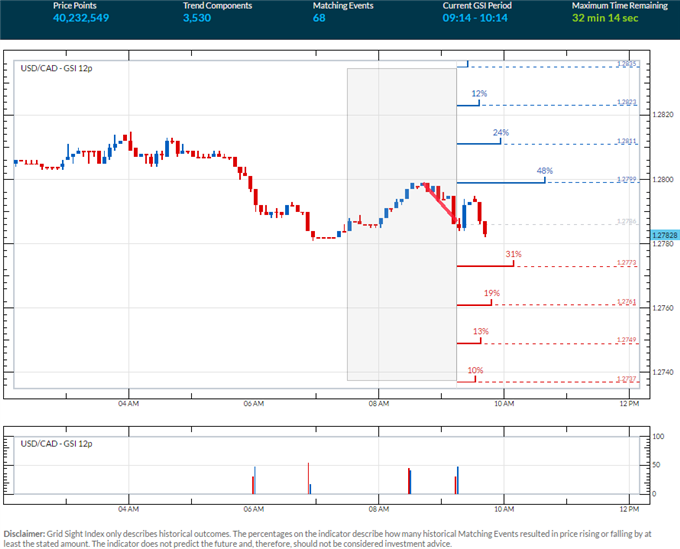 The USD/CAD is approaching support at 1.2780 at the time of writing (see chart below). The GSI indicator above shows that in 48% of similar past events, the pair traded higher by 13 pips and 25 pips higher 24% of past events. The GSI indicator calculates the distribution of past event outcomes given certain momentum patterns, and can give you a look at the market in a way that's never been possible before, analyzing millions of historical prices in real time. By matching events in the past, GSI describes how often the price moved in a certain direction.

We use volatility measures as a way to better fit our strategy to market conditions. The trading environment at the moment seems to represent heightened possibility for volatile moves and reactions due to the upcoming EU Referendum. In turn, it may imply that breakout type trades are preferable in the short term.

Meanwhile, the DailyFX Speculative Sentiment Index (SSI) is showing that about 57.0% of traders are long the USD/CAD at the time of writing. Retail traders flipped net long June 16, and increased longs on the move down, apparently trying to pick a bottom (see the “Traits of Successful Traders” research).