- EUR/USD still contained below the 1.14 handle after gapping higher yesterday

The EUR/USD is edging slightly lower on London open after retracing yesterday below the 1.14 handle. The Euro gapped higher versus the US Dollar at the trading week open, apparently on the backdrop of polls over the weekend that seemed to favor the “Remain” side in the upcoming UK EU referendum.

The seemingly complete absorption of market focus on “Brexit” might imply that major events that can induce monetary policy speculation, such as the Fed Chair Yellen testimony and a speech by ECB president Mario Draghi could potentially have less market moving influence in the short term.

Euro-Zone ZEW survey might take a back sit as the market seems to shift and turn in response to “Brexit” induced volatility and opinion polls. The “Brexit” implications for the Euro appear to be significant, which could in turn explain why the currency’s main driver for the time being appears to be related to the “Brexit” sentiment swings.

Taking this into consideration might imply that the scrutinized speeches today by both Mario Draghi and Janet Yellen could have limited impact. The Fed’s Chair remarks before the Senate Banking Committee and the House Financial Services Committee could provide further information on the timing of future rate hikes, as the Fed projections are still not in line with market pricing (Fed Funds Futures do not price a hike at least until February 2017).

Traders might potentially hold back on clear directional bets stemming from monetary policy speculation before the “Brexit” vote. 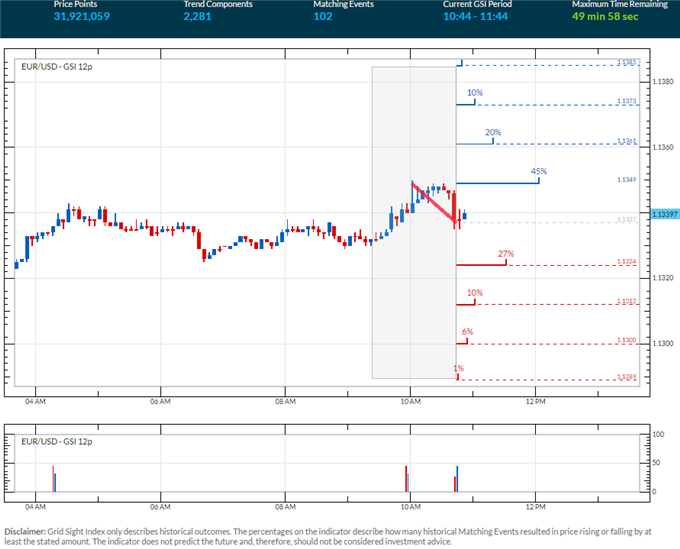 The EUR/USD gave back some of the Asia gains, but the GSI indicator above shows that in 45% of similar past events, the pair traded higher by 12 pips and 24 pips higher 20% of past events. The GSI indicator calculates the distribution of past event outcomes given certain momentum patterns, and can give you a look at the market in a way that's never been possible before, analyzing millions of historical prices in real time. By matching events in the past, GSI describes how often the price moved in a certain direction.

We use volatility measures as a way to better fit our strategy to market conditions. The trading environment at the moment seems to represent heightened possibility for volatile moves and reactions due to the upcoming EU Referendum. Indeed the market may be underestimating the “Brexit” risk to the Euro. In turn, it may imply that breakout type trades are preferable in the short term.

Meanwhile, the DailyFX Speculative Sentiment Index (SSI) is showing that about 42.3% of traders are long the EUR/USD at the time of writing. Retail traders flipped net short June 16, and increased shorts on the move higher, apparently trying to pick a top. This reading seems to be confirmed by the fact that short positions have been reduced slightly on the pullback lower (see the “Traits of Successful Traders” research).

The SSI is mainly used as a contrarian indicator, implying a further strength ahead for the pair.

Engulfing Candle Patterns & How to Trade Them
Advertisement