The USD/CAD is trading lower after a surge higher earlier this week, which seemed to follow a “risk assets” sell off. However, the sentiment linked Canadian Dollar seems to strengthen versus its US counterpart on higher share prices at the moment, alongside the Euro and the British Pound, emphasizing the focus on “Brexit” for the time being.

US building permits and Canada Consumer Price Index headline the economic calendar, but could have limited affect as market focus seems completely turned to next week’s EU referendum and the possibility of a “Brexit” scenario.

The Canada Consumer Price Index is also on the docket. Headline CPI is set to print an easing to 1.6% year-on-year from the prior 1.7% figure, while the core figure is expected to downtick as well.

The weekly Baker Hughes rig count could have a say as well for the pair, but as mentioned, the events on the docket could have limited impact today as the market appears to be in correction mode ahead of next week, as “Brexit” fears make their way to global risk trends. 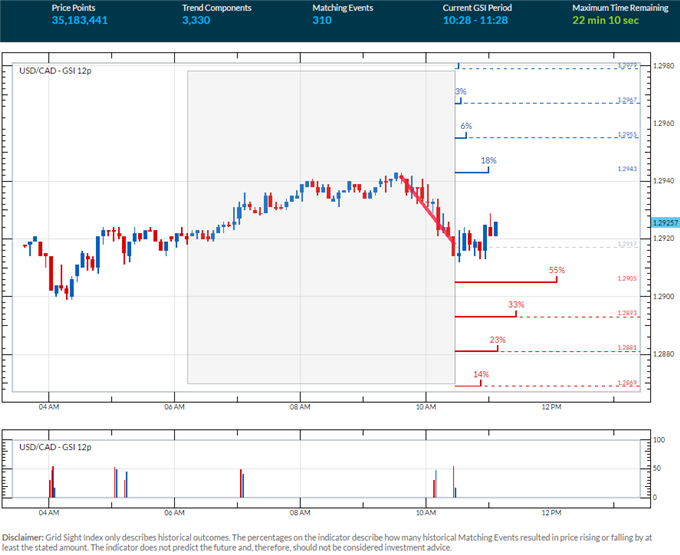 The USD/CAD moved lower by about 25 pips on London open, and the GSI indicator above shows that in 55% of similar past events, the pair continued to trade lower by 8 pips. The GSI indicator calculates the distribution of past event outcomes given certain momentum patterns, and can give you a look at the market in a way that's never been possible before, analyzing millions of historical prices in real time. By matching events in the past, GSI describes how often the price moved in a certain direction.

We use volatility measures as a way to better fit our strategy to market conditions. CVIX gauge of one-month implied FX volatility has surged to the highest level since 2011 on the backdrop of the upcoming EU referendum. This might help to explain the volatility bursts as of late. In turn, it may imply that breakout type trades are preferable in the short term. With that being said, given the aforementioned considerations, today might see sideways movement for the pair in which technical levels may hold while Crude Oil could potentially cap Canadian Dollar gains.

Meanwhile, the DailyFX Speculative Sentiment Index (SSI) is showing that about 51.74% of traders are long the USD/CAD at the time of writing. The SSI is mainly used as a contrarian indicator, implying a slight short bias for the pair.