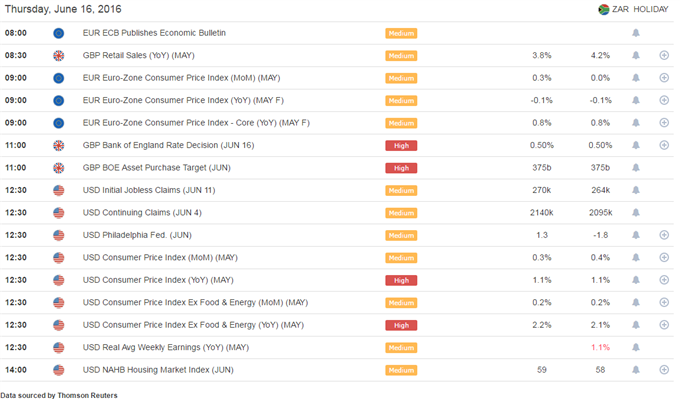 - EUR/USD moved higher after the Fed downgraded its rates path

The EUR/USD moved higher following the FOMC rate decision, in which the central bank kept policy unchanged and downgraded its rate outlook.

Both the Euro-Zone and the US CPI figures are set to hit the wires today, but significant impact seems unlikely as the market digests yesterday’s decision and “Brexit” fears are still in the background.

Euro-Zone Final Consumer Price Index headlines the docket for the Euro in European trading hours. The headline figure is expected to have a negative -0.1% print, as the flash estimate, which is set to confirm the fourth consecutive month in which the Euro-Zone has been in deflation. Core CPI is expected to show an annual rise of 0.8%. The CPI figures today might not have a significant impact, unless a very meaningful deviation hits the wires, as the ECB seems to be in “implementation mode” of stimulus measures announced in March.

Also on the docket is the Bank of England Rate Decision. It seems highly unlikely that the central bank will conduct any changes to policy due to the fact that the bank’s projections are based on conditions in which the UK is within the EU. However, the press release might be scrutinized for comments on the upcoming referendum, which in turn could have implications for the Euro, as it seems the currency might face pressure ahead as well.

US CPI figures are set to hit the wires later today. Year-on-year core CPI is expected to uptick to 2.2% from the prior 2.1% print. The Fed’s updated Summary of Economic Projections yesterday signaled higher outlooks for inflation in each year surveyed, so if inflation does tick up this might put the focus mainly on global risks, such as the possibility for a “Brexit”, which in turn could lead to less impact by the CPI figures today. 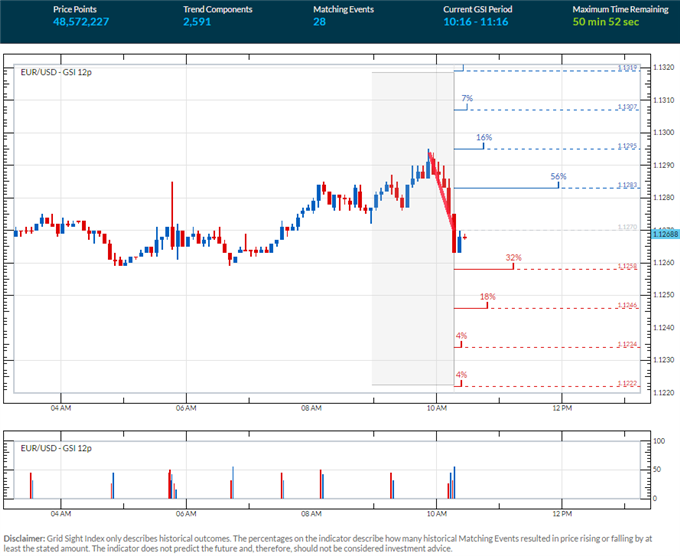 The EUR/USD moved lower by about 25 pips on London open. However, the GSI indicator above shows that in 56% of similar past events, the pair traded higher by 12 pips. The GSI indicator calculates the distribution of past event outcomes given certain momentum patterns, and can give you a look at the market in a way that's never been possible before, analyzing millions of historical prices in real time. By matching events in the past, GSI describes how often the price moved in a certain direction.

We use volatility measures as a way to better fit our strategy to market conditions. CVIX gauge of one-month implied FX volatility has surged to the highest level since 2011 on the backdrop of the upcoming EU referendum. In this context volatility bursts appear likely which might imply that breakout type trades are preferable in the short term. With that being said, the EUR/USD might see limited follow-through as the pair could potentially trade sideways in anticipation of the British Referendum next week. So caution is warranted, but technical levels might hold for the time being.

The EUR/USD is trading near what seems like a key resistance zone capped by the 1.13 handle. Other levels of interest on a move higher could be 1.1321 followed by possible resistance between 1.1338-1.1350 and 1.1380 right after. The 1.14 handle could prove significant if the price makes an outsized move.

Meanwhile, the DailyFX Speculative Sentiment Index (SSI) is showing thatabout 44.40% of traders are long the EUR/USD at the time of writing. The SSI is mainly used as a contrarian indicator, implying possible strength ahead.