China didn’t fall into the abyss last night and on that neither did European markets. The CAC 40 is experiencing a bit of a bounce today, but still has room to the down-side before challenging the same key respective levels the DAX is nearing (unsurprisingly). The French, like the German index is quickly approaching a long-term trend-line extending back to the fall of 2011 as well as the late summer/early fall lows.

The cross-winds of support in the 4225/75 vicinity represents a significant area for potential demand. Even if buying efforts only result in a temporary recovery before plunging through to much lower levels, some type of reprieve should be in store. 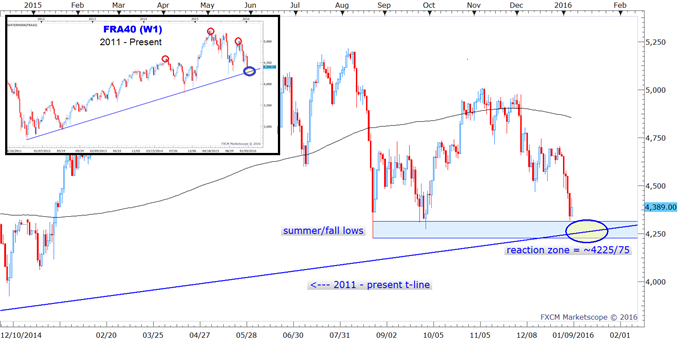 With the current market structure in mind, very short-term bearish positions established on counter-trend moves (such as the one beginning to unfold today) still have room to work. However, it is wise, at the very least, for traders who have been holding shorts through the recent decline to keep stops tight while thinking about taking profits once support levels are tested.

For those who like to pick up markets on the ‘cheap’, large support offers the opportunity to establish a long position with a marker for determining risk. Simply put, a break through support warrants the exit of bullish wagers.

Buying support, regardless of whether it is short covering or a fresh long, can be approached one of couple of ways depending on your trading style. Some traders will nimbly trade right off key levels, attempting to get the ‘best prices’, while others will wait for the market to reverse off those levels before entering. I generally take the former approach for covering shorts and the latter before establishing a fresh long position, ‘making’ the market ‘prove itself’. The swing low created on the turn higher from support is then used as a reference for determining the stop-loss.

When taking the ‘prove it’ approach, the reversal in momentum can be identified by either a candlestick formation or a bullish technical pattern such as an ‘inverse head-and-shoulders’. One caveat to this tactic is the risk of missing opportunities as price developments don’t always unfold to your liking despite the overall trading bias later being proven correct. In the end, it is about your own personal trading style and what you are most comfortable with.

To conclude, the CAC still has a little room to go before running aground on support, still making very short-term shorts favorable on failed rallies. However, significant support below does flag caution to the shorts while giving ‘would-be’ longs a point of reference from which to look for a potential bounce.

Having trouble taking analysis to the point of execution? Check out 'Traits of Successful Traders'.