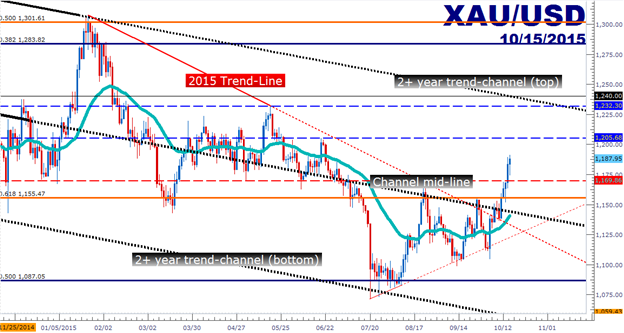 In our last piece, we looked at the vigorous price action being seen in Gold as Dollar-weakness permeated throughout markets. Since that writing, the weakness in the Dollar (and the accompanying strength in Gold) has done little to slow down. The ‘line-in-the-sand’ level mentioned in our last piece was quickly crossed, and prices have continued trending higher, breaking through numerous resistance levels. The initial target on long positions of $1,200 remains open; and potential resistance at $1,205 and $1,232 (both prior price action swing-highs) could furnish secondary and tertiary targets should this near-term bullish momentum continue.

On the short-side of Gold, near-term bullish momentum should give reason for caution; as diminishing hopes of a rate hike out of the United States could continue to drive the dollar lower and providing additional bullish stimuli for Gold. However, the levels listed previously at $1,205 and $1,232 could provide near-term resistance, and for traders looking to get short, either of these levels could offer the potential for reversal plays. The aggressiveness with which one wants to fade this move would determine how much confirmation of resistance would be required, with those looking to take a conservative stance allowing price to begin falling before getting short, while those going more aggressive could jump in the trade quicker for a larger risk-reward ratio (and a higher degree of failure given the decreased confirmation).

The bullish side of Gold remains the near-term bias in the market. The recent ramp in gold prices makes the prospect of triggering longer-term positions daunting, as we’re now $84 above the previous swing-low of $1,104, and justifying this wide of stop could be challenging. Traders could look to a more-near level of potential support in the effort of keeping risk tighter, and for this purpose the ‘line-in-the-sand’ from Tuesday’s article could suffice. For this, traders would want to look to lodge stops below $1,169.86 (the previous swing-high), and look for profit targets at $1,205 and $1,232. If $1,232 comes into play, a descending trend-line could offer resistance, currently projecting to $1,240. This trend-line serves as the top-end of a channel that’s been running for over two years on Gold (shown in black on the below chart).