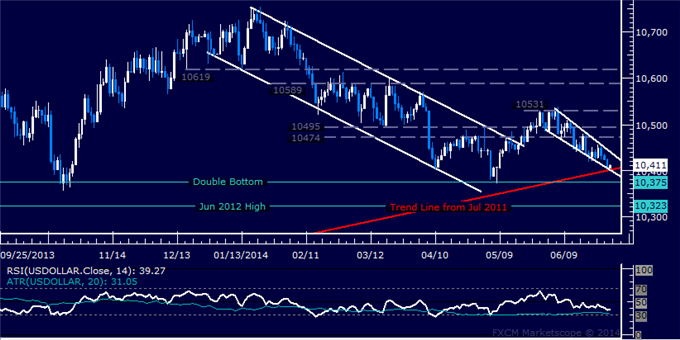 US DOLLAR TECHNICAL ANALYSIS – Prices remain in a precarious position as prices continue to hover above multi-year rising trend support set from July 2011. This barrier (now at 10401) is reinforced by a falling Wedge formation bottom. A daily close below that would suggest a major reversal is in progress and initially expose double bottom support at 10375, followed by the June 2012 high at 10323.Wedge resistance is at 10440, with a move above that exposing the 10474-95 cluster. The next topside barrier after that stands at 10531, May 28 high.

S&P 500 TECHNICAL ANALYSIS – Prices turned lower as expected after putting in a Shooting Star candlestick coupled with negative RSI divergence. Sellers are testing the 14.6% Fibonacci retracement at 1944.50, with a break below that on a daily closing basis exposing the 23.6% level at 1930.20. Alternatively, a reversal above the June 24 high at 1967.60 aims for a rising channel top at 1982.70. 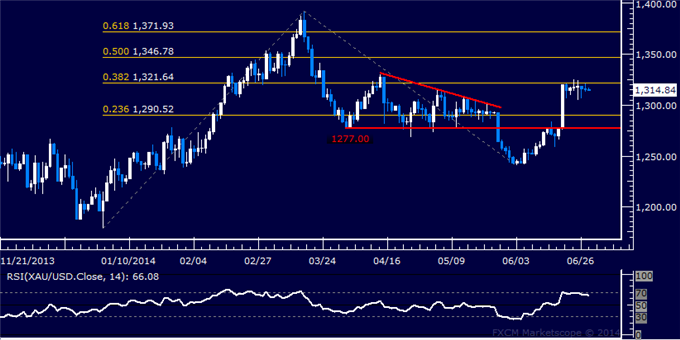 CRUDE OIL TECHNICAL ANALYSIS – Prices remain in consolidation mode below resistance at 107.19, the 23.6% Fibonacci expansion.A daily close above this barrier initially targets the 38.2% level at 108.49. Alternatively, a reversal below the 23.6% Fib retracementat 105.54 clears the way for a test of the 104.24-73 area, marked by a formerly broken triple top, the 38.2% threshold and a rising trend line set from early May. 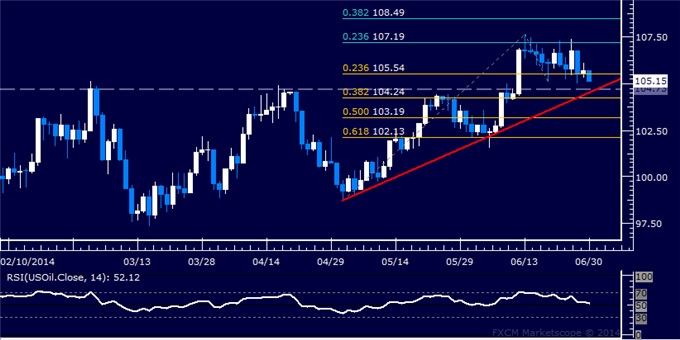