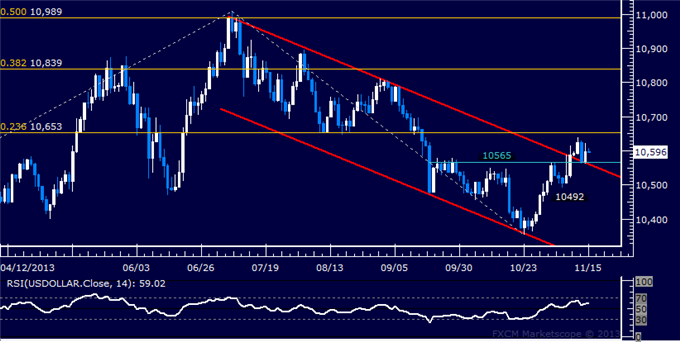 US Dollar Rally Poised to Resume, SPX 500 at Risk of Reversal

US DOLLAR TECHNICAL ANALYSIS – Prices pulled back to retest resistance-turned-support at 10565, marked by the top of a falling channel set from July and a horizontal barrier in play since late September. A break below this eyes the November 6 low at 10492. Near-term resistance is at 10653, the 23.6% Fibonacci expansion, with a push above that targeting the 38.2% level at 10839.

GOLD TECHNICAL ANALYSIS – Prices started to drift higher as expected after showing a bullish Piercing Line candlestick pattern. Initial resistance is at 1294.51, marked by the 23.6% Fibonacci retracement and reinforced by the top of a minor falling channel. A break above that initially exposes the 38.2% Fib at 1321.09. Near-term support is at 1261.28, the November 12 low.

CRUDE OIL TECHNICAL ANALYSIS– Prices began to edge higher as expected after putting in an Inverted Hammer candlestick above support at 93.05, the November 5 low. Positive RSI divergence bolsters the case for an upside scenario. Initial resistance is at 95.85, marked by the 14.6% Fibonacci expansion and reinforced by the top of a falling channel set from late August. A break higher initially exposes the 23.6% level at 97.57. Alternatively, a move below 93.05 targets the channel bottom at 91.15.