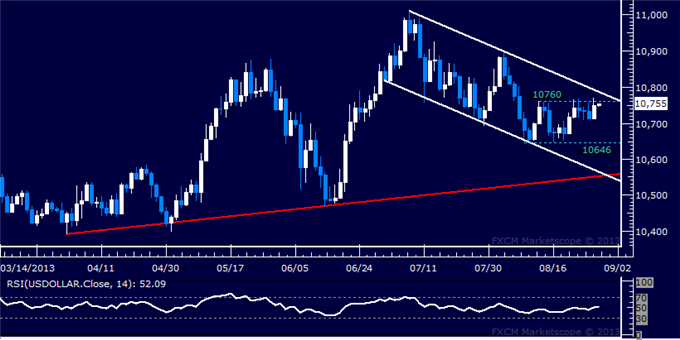 US Dollar Capped by Range Top, SPX 500 at Risk of Deeper Losses

THE TAKEAWAY: An attempted recovery from the US Dollar was capped by the now-familiar August range top. The SPX 500 remains at risk after the selloff paused yesterday.

Don’t have access to the Dow Jones FXCM US Dollar Index? Try the USD basket via Mirror Trader as an alternative. **

US DOLLAR TECHNICAL ANALYSIS – Prices continue to consolidate below familiar range resistance at 10760, marked by the August 13 high. Range support is at 10646, with a break below that targeting the bottom of a falling channel set from early July (now at 10564). A reversal above 10760 aims for the channel top at 10787.

S&P 500 TECHNICAL ANALYSIS – Prices dropped as expected after putting in a Bearish Engulfing candlestick pattern. Sellers have cleared support at a rising trend line defining the rising trend from November 2012, hinting a major reversal may be at hand. The next level of support from here is at 1616.60, the 61.8% Fibonacci retracement. Alternatively, a move back above the 50% level at 1643.30 opens the door for a retest of the trend line as resistance, now at 1643.00. 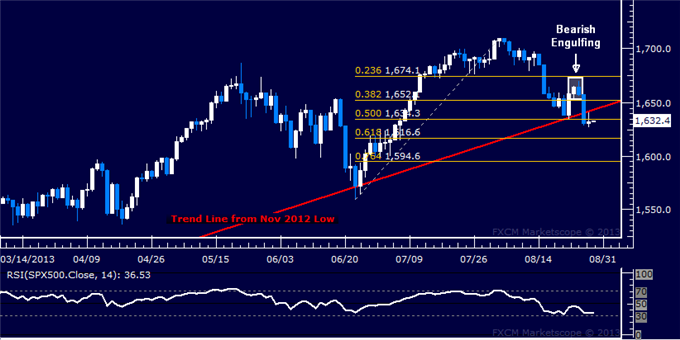 GOLD TECHNICAL ANALYSIS – Prices put in a Shooting Star candlestick pattern below resistance at 1440.23, marked by the intersection of a rising channel top and the 100% Fibonacci expansion, hinting at a move lower ahead. Near-term support is at 1400.72, the site of the 76.4% Fib and the channel bottom, with push beneath that initially exposing the 61.8% level at 1376.28. Alternatively, a push above resistance eyes the 123.6% expansion at 1479.74.

CRUDE OIL TECHNICAL ANALYSIS– The appearance of a Triangle chart pattern preceded upward continuation as expected. Near-term resistance is now at 111.10, the 38.2% Fibonacci expansion, with a break higher exposing the 50% level at 113.85. A Shooting Star candlestick warns of a pullback however. Initial support is at 107.70, marked by the Triangle top and the 23.6% level. 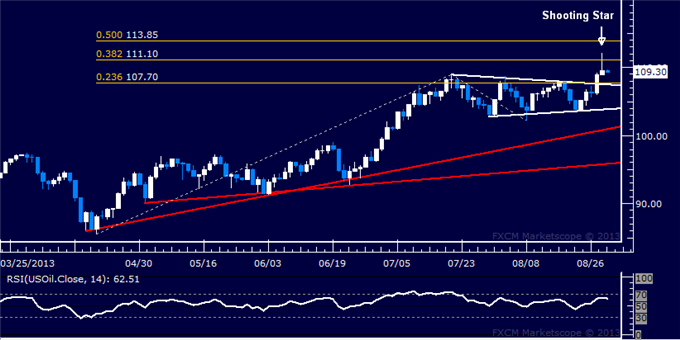