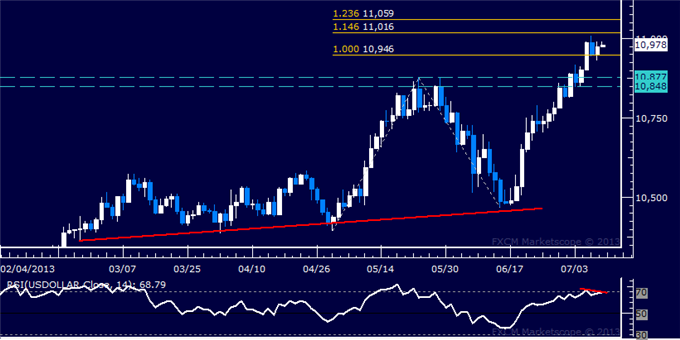 THE TAKEAWAY: US Dollar technical positioning shows early signs of a possible turn lower. The S&P 500 has overturned the bearish breakout triggered three weeks ago.

US DOLLAR TECHNICAL ANALYSIS – Prices broke above resistance at 10946, the 100% Fibonacci expansion, opening the door for a move higher to challenge the 123.6% level at 11016. Early signs of negative RSI divergence warn of ebbing bullish momentum however and hint a turn lower may be ahead. The 10946 mark has been recast as near-term support, with a move back beneath that aiming for the 10848-77 area (marked by the late-May top).

S&P 500 TECHNICAL ANALYSIS – Prices moved higher as expected after putting in a bullish Piercing Line candlestick pattern. The bulls have now overtaken trend line support-turned-resistance set from mid-November 2012 to challenge the 61.8% Fibonacci expansion at 1652.90. A break above that targets the 76.4% level at 1675.10. Alternatively, a move back below the trend line (1643.70) aims for the 50% Fib at 1617.10. 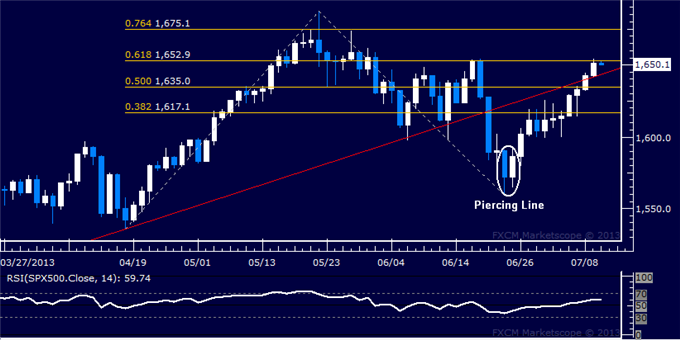 CRUDE OIL TECHNICAL ANALYSIS– Prices advanced as expected after putting in a bullish Piercing Line candlestick pattern above trend line support. The bulls have now overcome the 78.6% Fibonacci expansion at 103.35, exposing the 100% level at 106.26. The 103.35 level has been recast as near-term support, with a move back beneath that eyeing the 61.8% Fibat 101.07. 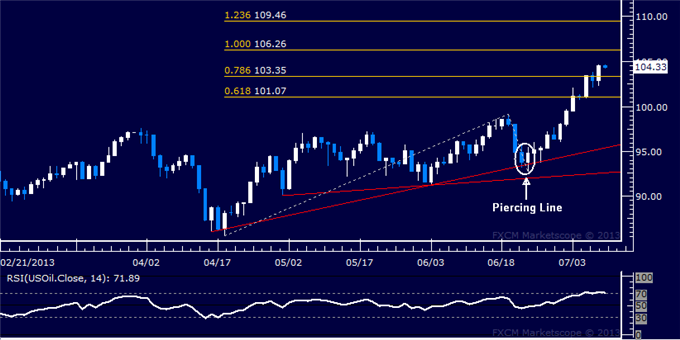