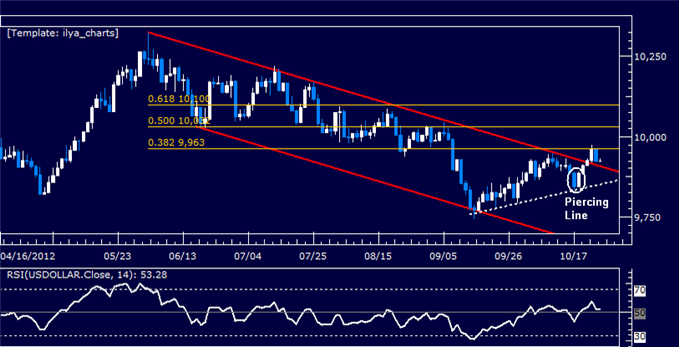 FOREX ANALYSIS: US Dollar Pulls Back as S&P 500 Selloff Stalls

THE TAKEAWAY: The US Dollar corrected lower as the S&P 500 selloff stalled after clearing trend-defining support but overall positioning still favors a stronger greenback.

US DOLLAR – Prices pulled back from 9963, the 38.2% Fibonacci retracement, to retest resistance-turned-support at the upper boundary of a falling channel set from the June 1 high (9904). The move appears corrective, with overall positioning still favoring a broadly bullish bias. A push through 9963 targets the 50% Fib at 10032. Alternatively, a drop below support targets rising trend line support at 9852.

S&P 500 – Prices pushed lower as expected after putting in a bearish Dark Cloud Cover candlestick pattern below resistance at 1466.10. Sellers took out trend-defining support at the bottom of a rising channel set from the June low, a barrier reinforced by the March 27 high (1424.90) and the 23.6% Fibonacci retracement (1425.10), hinting prolonged weakness is ahead. The first downside objective from here is at 1394.30, the 38.2% Fib. Near-term, a Spinning Top candle points to indecision and hints a corrective upswing may materialize before renewed selling. The 1424.90-1425.10 area has been recast as resistance, with a reversal back above that targeting the channel bottom at 1437.90. 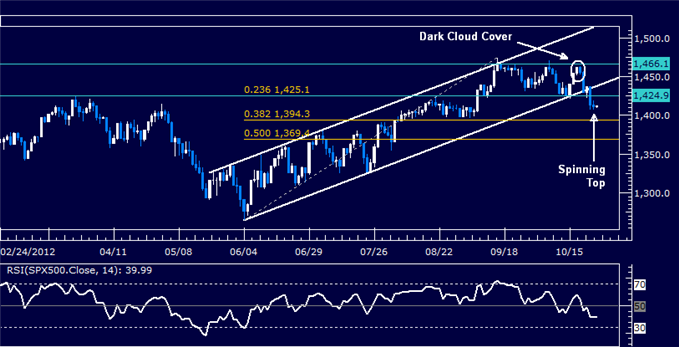 GOLD – Prices continue inch lower as expected following the formation of a bearish Dark Cloud Cover candlestick patter. Sellers have taken out support in the 1732.33-35.65 area, marked by a horizontal pivot level and the 23.6% Fibonacci retracement, exposing the 38.2% level at 1693.06. Alternatively, a break above 1735.65 targets 1778.67. 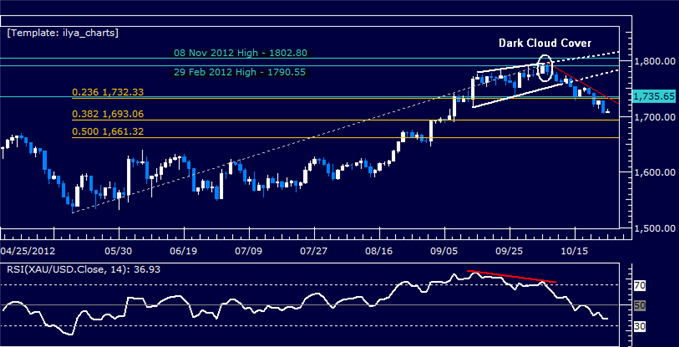 CRUDE OIL – Prices continue to push lower as expected after taking out support at 87.66, the 38.2% Fibonacci expansion. Sellers continue to take aim at the 50% level at 83.76, with a break below that exposing the 61.8% Fib at 79.84. The 87.66 mark has been recast as near-term resistance. A reversal back above that targets the psychologically significant 90.00 figure and a falling trend line set from late September, now at 91.84. 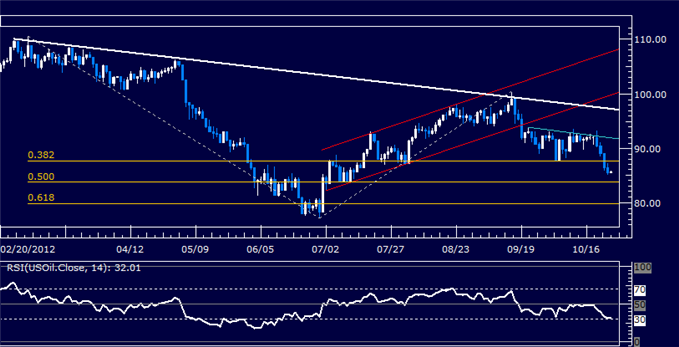