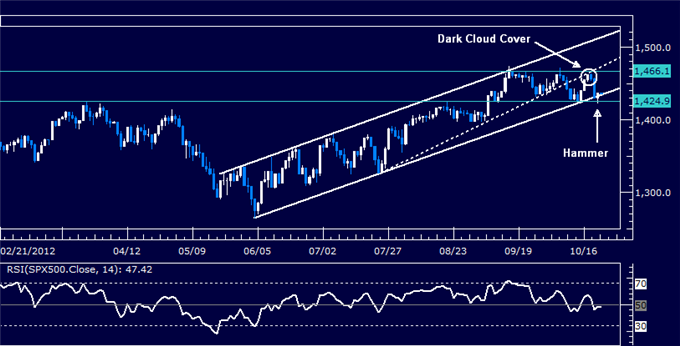 THE TAKEAWAY: The US Dollar pierced resistance defining the down trend since June but the lack of a parallel breakdown in the S&P 500 warns follow-through may be limited.

S&P 500 – Prices pushed lower as expected after putting in a bearish Dark Cloud Cover candlestick pattern below resistance at 1466.10. Sellers are now probing key support at 1424.90, marked by the March 27 swing high and reinforced by the bottom of a rising channel set from early June. A Hammer above this barrier warns of indecision and hints a bounce may be ahead. Resistance remains at 1466.10. Alternatively, renewed selling pressure that produces break below this level initially exposes the 1400 figure.

CRUDE OIL – Prices continue to consolidate above support at 87.66, the 38.2% Fibonacci expansion. Resistance is at 92.25, marked by a falling trend line established from late September, with a break above that targeting a larger downward-sloping barrier set from the February top, now at 97.90. Alternatively, a drop through support exposes the 50% level at 83.76. 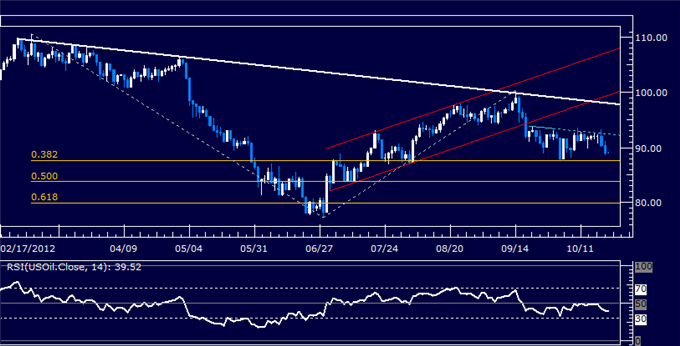 GOLD – Prices continue inch lower as expected following the formation of a bearish Dark Cloud Cover candlestick patter. Sellers have taken out support in the 1732.33-35.65 area, marked by a horizontal pivot level and the 23.6% Fibonacci retracement, exposing the 38.2% level at 1693.06. Resistance is at 1737.99, a falling trend line set from the October 5 swing high. A break above that targets 1777.32. 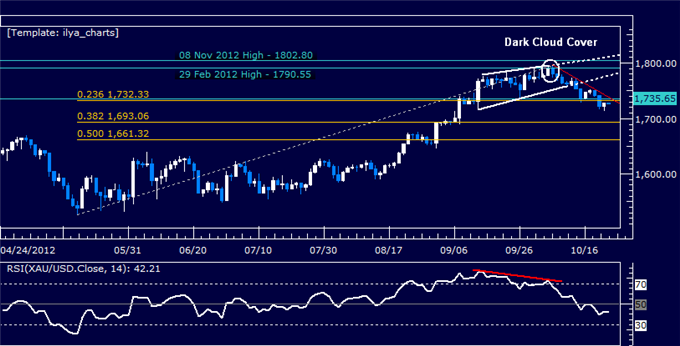 US DOLLAR – Prices broke above key resistance at the top of a falling channel defining the down trend since June after putting in a bullish Piercing Line candlestick pattern above support at 9835, the 23.6% Fibonacci expansion. From here, the bulls aim to challenge resistance at 9938, with a break above that targeting 9980. The channel top, now at 9913, has been recast as support. A break below that targets a rising trend line in place from mid-September, now at 9844. 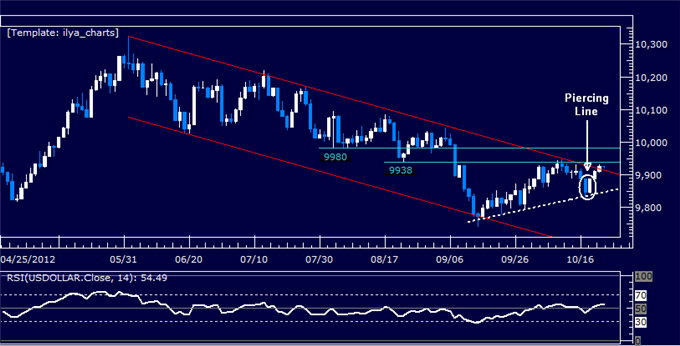