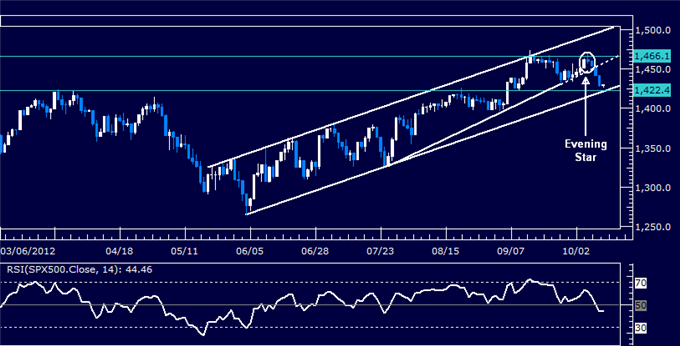 THE TAKEAWAY: The US Dollar is testing trend-defining technical resistance, with a break higher marking a major bullish reversal, while the S&P 500 sinks toward key support.

S&P 500 – Prices followed the formation of a bearish Evening Star candlestick pattern with a break below rising trend line support set from late July, reinforcing the case for a double top at 1466.10. Sellers now aim to challenge support at 1422.40, a barrier reinforced by the bottom of a rising channel set from early June (1420.70). A break below that initially exposes the 1400 figure. Trend line resistance is now at 1456.80.

CRUDE OIL – Prices are testing minor falling trend line resistance at 92.68 that has capped gains over recent weeks. A break higher targets the 94.00 figure, followed by the underside of a rising channel set from early July (now at 97.67). Near-term support is at 87.70, the 38.2%Fibonacci expansion, with a push below that targeting the 50% level at 83.76. 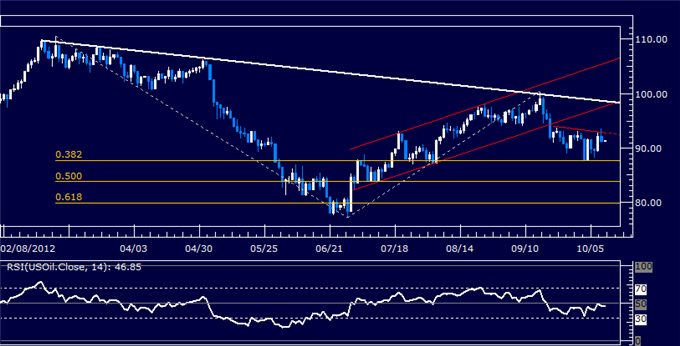 GOLD – Prices continue to push lower after completing a bearish Dark Cloud Cover candlestick pattern below resistance in the 1790.55-1802.80 area, a setup reinforced by negative RSI divergence. Sellers have cleared the bottom of a Rising Wedge chart pattern, exposing the 23.6% Fibonacci retracement at 1747.20 as the next downside objective. The Wedge bottom, now at 1773.68, has been recast as near-term resistance. A push back above that threatens 1790.55-1802.80 anew. 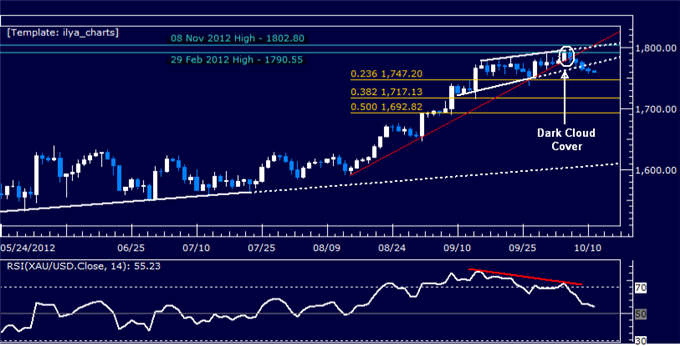 US DOLLAR – Prices invalidated a Bearish Engulfing candlestick pattern and are now testing through resistance in the 9928-38 area to challenge the top of a falling channel established from the June 1 swing high (9945). A break above this boundary initially targets the 23.6% Fibonacci expansion at 9976. However, a Harami candlestick pattern warns of a possible near-term pullback. Rising trend line support is now at 9877. 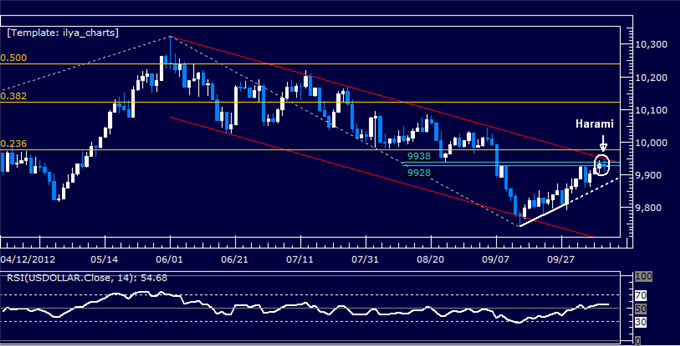