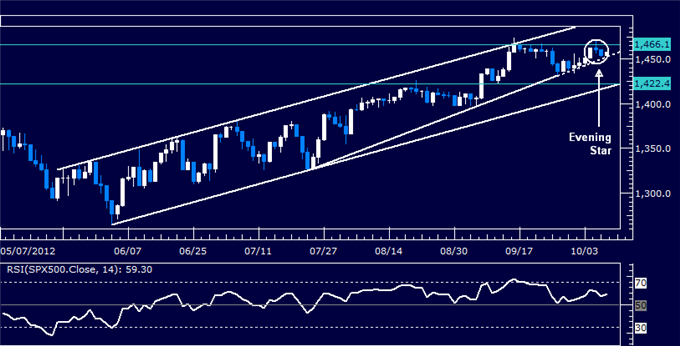 THE TAKEAWAY: S&P 500 technical positioning warns a significant double top may be in the works while gold prices edged past initial support en route to a larger bearish reversal.

S&P 500 – Prices put in a bearish Evening Star candlestick pattern below resistance at 1466.10, hinting a double top may be in the works and warning of weakness ahead. Initial trend line support is at 1451.90, with a break below that exposing 1422.40 and the bottom of a rising channel set from early June (1417.40). Alternatively, a push above resistance targets the channel top, now at 1495.60.

CRUDE OIL – A burst of seesaw volatility last week has left prices locked between support at 87.70 and resistance at 92.56, the 38.2% and 23.6% Fibonacci expansions respectively. A break above resistance exposes the underside of a rising channel set from early July, now at 97.21. Alternatively, a drop through support targets the 50% expansion at 83.76. 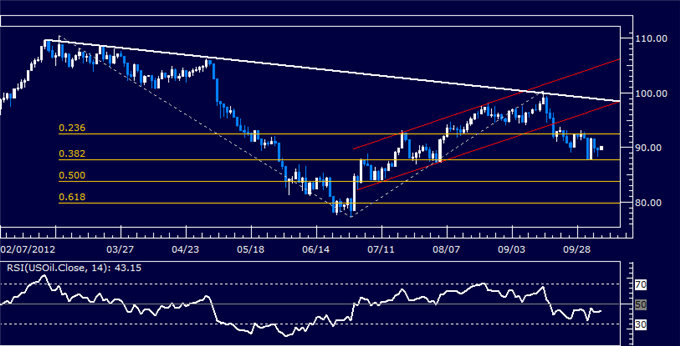 GOLD – Prices broke through support at a rising trend line set from mid-August after completing a bearish Dark Cloud Cover candlestick pattern below resistance in the 1790.55-1802.80 area, hinting a move lower is ahead. Negative RSI divergence reinforces the case for a downside scenario. Secondary support at the bottom of a Rising Wedge chart pattern is now at 1769.30, with a break below that exposing the 23.6% Fibonacci retracement at 1747.20. Alternatively, a break above 1802.80 targets 1850.00 and the 1900/oz figure. 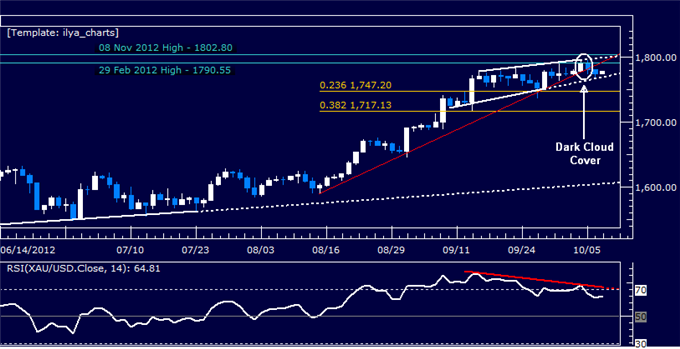 US DOLLAR – Prices put in a Bearish Engulfing candlestick pattern below resistance in the 9928-38 area, hinting a move lower may be ahead, though follow-through has been absent so far. Still, the setup remains technically valid absent a close above the formation’s high at 9931. Initial rising trend line support is at 9815, with a break below that exposing the September 14 close at 9773. Alternatively, a push above resistance targets the top of a falling channel established from the June 1 swing high, now at 9953. 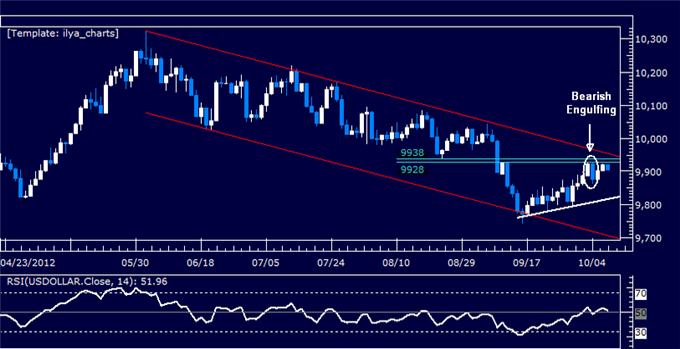