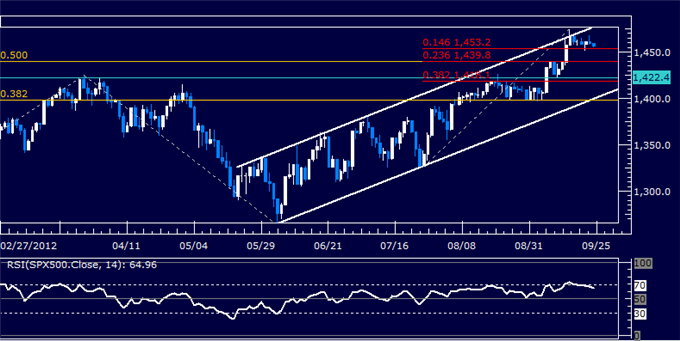 THE TAKEAWAY: The US Dollar has mounted a shallow recovery but follow-through from broader sentiment trends remains suspect as the S&P 500 continues to tread water.

CRUDE OIL – Prices are testing support at 91.56, the 38.2% Fibonacci retracement, after taking out the bottom of a rising channel carved out since early July. A break downward targets the 50% level at 88.83. The channel bottom – now at 94.96 – has been recast as resistance. A push back above that aims to challenge a falling trend line set from late February (now at 99.38). 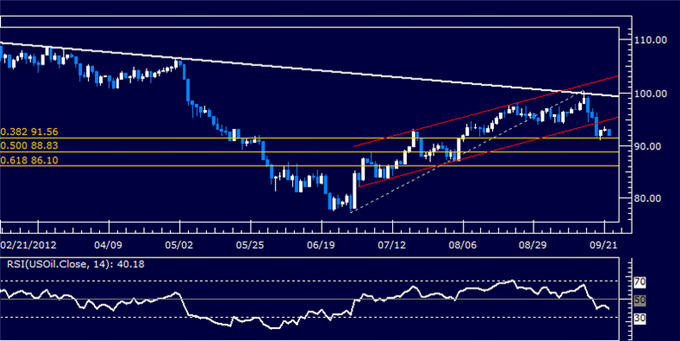 GOLD – Prices continue to stall after taking out resistance at a falling trend line connecting major swing highs since early November 2011. Near-term resistance is at 1790.55, with a break above that targeting 1802.80. The trend line – now at 1756.94 – has been recast as support. A push back below that boundary sees initial downside barriers at 1725.87 and 1687.84, the 23.6% and 38.2% Fibonacci retracements respectively.

US DOLLAR – Prices re-testing the previously broken bottom of a rising channel set from the September 14 low (now at 9831). A break higher initially exposes the 38.2%Fibonacci retracement at 9857. Near-term support lines up at 9783, the 23.6% Fibonacci expansion, with a break below that targeting the 38.2% expansion at 9738.