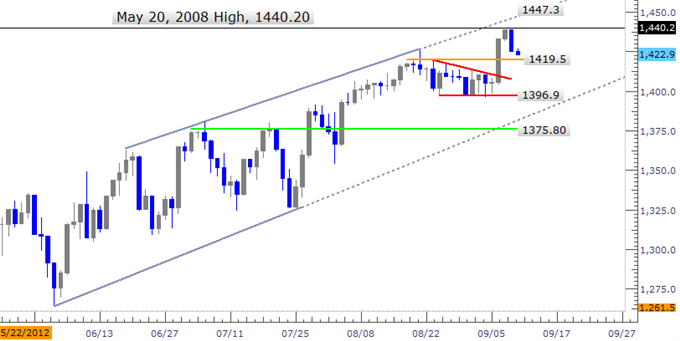 THE TAKEAWAY: S&P 500 at key sticking point while Gold may still point higher. Crude is unclear and the Dollar has been trending lower.

S&P 500 – Yesterday’s analysis took a look at the larger weekly time frame which gave a very clear picture of potential major levels of support and resistance. The analysis highlighted the fact that price action had reached within literally one point from taking out the May 20, 2008 high where the 1440.20 level could serve as resistance. Today, we take a closer look on a daily chart and see that resistance did indeed hold at this key level. If the market breaks higher immediately, then the turning point after today’s decline might possibly be around 1419.50 (orange line). This area was once past resistance and may serve as a potential level of support. Alternatively, if price action begins a heavy descent, then the market should easily be able to push through 1419.50. 1396.90 may also act as a floor of support as it once served as a consolidation floor. The next level for the bears to take out would be 1375.80 which rests just below rising trendline (grey line) support. This area is likely to serve as major carving point. However, a move from 1422.90 down to 1375.80 is roughly a 3 percent drop, which is a major move for one day’s trading and may signal that a reversal is underway.

CRUDE OIL – Today’s analysis remains unchanged from yesterday. Prices appear to have fallen into a consolidation range marked between resistance at around the 97.64 area down to support around the 94.14 area. The consolidation appears to have formed after testing the descending (light grey) trendline around 97.64. A break higher may expose 101.05 which was once a level of past support and could now potentially serve as a level of future resistance. Conversely, a break below 94.14 could quickly find support around the 92.59 area which acted as a level of past resistance and could potentially serve as future support. The same stands for the 87.72 area if the market breaks below 92.59. 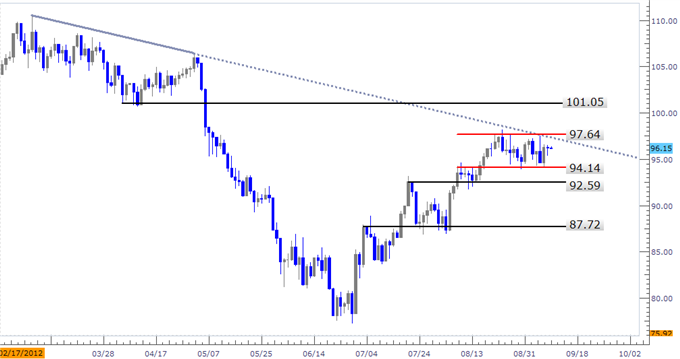 GOLD – Prices, on a 4 hour chart, have rallied to the top of an aggressive rising trend channel where it appears to have found some level of resistance. The market for the precious metal still appears to be in the bull’s hands at least until the lower (grey line) trendline is taken out by the bears. The initial upside target remains unchanged from yesterday at the1790.55/oz area. Alternatively, if prices break below the ascending trend channel (grey lines), then the first target would likely be around the 1629.17/oz area (blue line) which once acted as a past level of resistance and may serve as future support. The next level below is around the 1608.53/oz area where the red wedge lines converge. Price action is likely to stick there at least temporarily before making a directional decision. Refer to yesterday’s analysis for the bigger picture outlook. 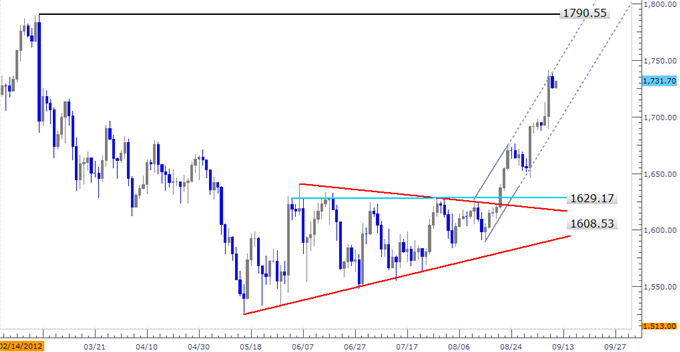 US DOLLAR – Prices appear to have found a stopping point at the light-blue falling channel support line after declining from the top of the grey descending resistance channel line. It’s not entirely clear what the Dollar intends to do on a technical basis. Clearly, though, this market has been making lower-lows and lower-highs since June 1. Potential downside levels of support appear around 9,816 and 9,672. Alternatively, the greenback would have to trade up through the falling trend channels (both grey and blue) before approaching 10,067 (red line) which has previously acted as a stopping point on what appears to be seven different occasions as shown on the graph. A break above 10,067 could initially target 10,223, then 10,323 both of which may also serve as potential resistance areas. The USDollar index is probably best shown on a weekly chart which was highlighted during yesterday’s analysis. 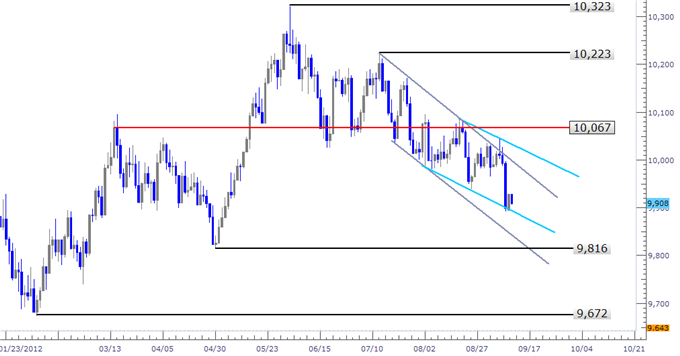