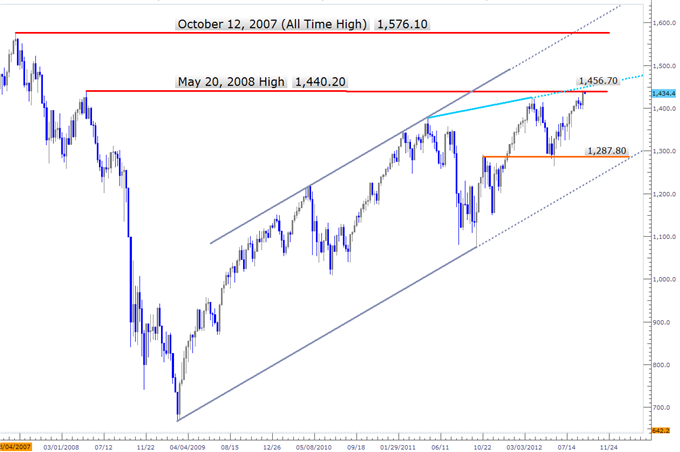 Gold Bulls Have Made Their Decision, S&P 500, Dollar Not as Clear

THE TAKEAWAY: S&P 500 at major resistance, while the Dollar has room to slide. Gold bulls have taken over on QE bets. Black-Gold (crude) appears rather undecided.

S&P 500 – Prices rallied to 1,439.10 which was just one point shy from a high established on May 20, 2008 and closed the week at 1,438.90. Moreover, the previous resistance high at 1,440.20 is also in line to converge with the (light-blue) ascending resistance line which could also serve as a potential sticking point at around the 1,456.70 area. A push through these barriers leaves little resistance in the way which could expose 1,576.10, matching the all time high. Alternatively, price action could range between the 1,440.20 area of resistance down to potential support previously established around 1,287.80 (orange line) area. The 1,287.80 area is also in line to converge with the (light-grey) ascending trendline.

CRUDE OIL – Prices appear to have fallen into a consolidation range marked between resistance at around the 97.64 area down to support around the 94.14 area. The consolidation appears to have formed after testing the descending (light grey) trendline around 97.64. A break higher may expose 101.05 which was once a level of past support and could now potentially serve as a level of future resistance. Conversely, a break below 94.14 could quickly find support around the 92.59 area which acted as a level of past resistance and could potentially serve as future support. The same stands for the 87.72 area if the market breaks below 92.59. 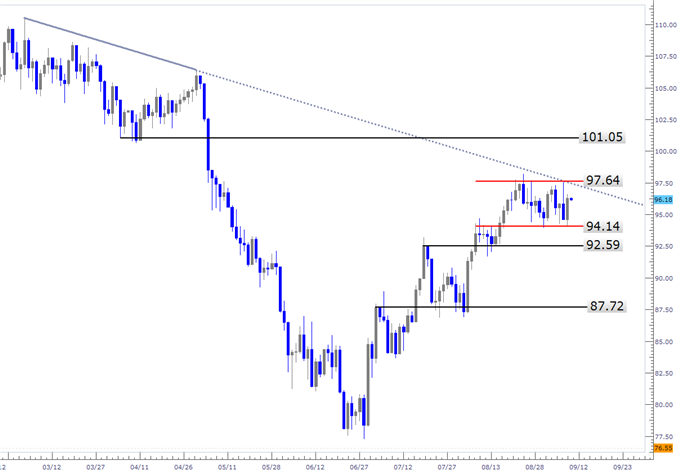 GOLD – Prices have clearly broken out of consolidation and pushed through the falling wedge line marked in red as traders appear to be hedging against the Dollar on QE speculation. The next target the bulls may be after appears to be around the 1,790.50/oz area. Alternatively, if prices begin to decline, the first major level of support the market might find projects to around 1,628.07/oz area. 1,628.07 was the previous consolidation resistance level and could act as potential future support. Moreover, the 1628.07 area is in line to converge with the back-side of the descending wedge line (red line) which could serve as possible support. 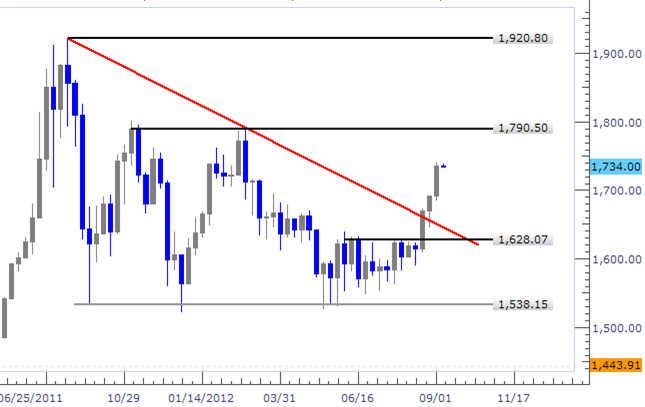 US DOLLAR – Prices appear to have broken the up-trendline (grey line) and is now likely to find support around 9,825, which was once a previous turning point. A break below 9,825 would expose 9,708 where price formerly held as previous resistance and previous support and has potential to act as a future turning point. To the up-side, prices must first trade above the descending trendline marked in red, and then could potentially target 10,324.