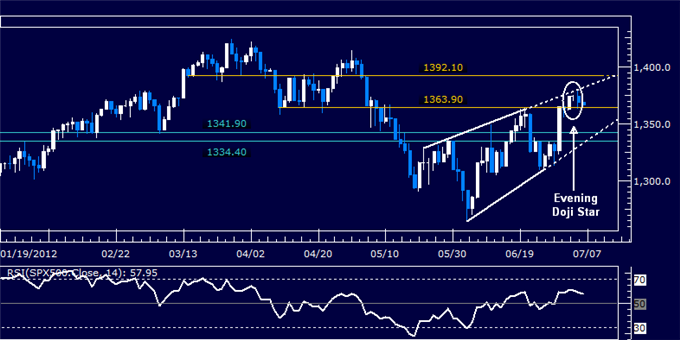 THE TAKEAWAY: The US Dollar finds itself at key resistance as the S&P 500 positioning continues to build the case for a significant bearish reversal ahead.

S&P 500 – Prices completed a bearish Evening Doji Star candlestick pattern at the top of a Rising Wedge chart formation, hinting a move lower is ahead. Initial support lines up at 1363.90, with a break below that exposing the 1334.40-41.90 area. A daily close beneath the latter boundary will confirm the larger Wedge setup, opening the door for a larger reversal. Wedge top resistance is now at 1381.30, with a break above that exposing 1392.10.

CRUDE OIL – Prices are showing a Shooting Star candlestick, hinting at ebbing bullish conviction and warning that a pullback may be ahead. Overall positioning continues to broadly favor the upside however, with the break of the 23.6% Fibonacci retracement at 85.11 arguing for a forthcoming test of resistance at 89.97 marked by the 38.2% level and reinforced by the psychologically significant 90.00 figure. A break back below 85.11 is needed to neutralize upside pressure, exposing 81.19 anew. 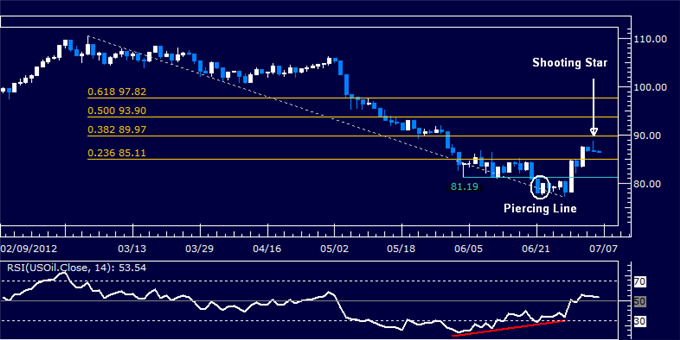 GOLD – Prices completed a bearish Evening Star candlestick pattern below falling trend line resistance set from late March, hinting a move lower is ahead. Initial support lines up at the 1600/oz figure, a psychological barrier reinforced by the 23.6% Fibonacci expansion. A break below that exposes the 38.2% level at 1575.81. Trend line resistance is now at 1618.43. 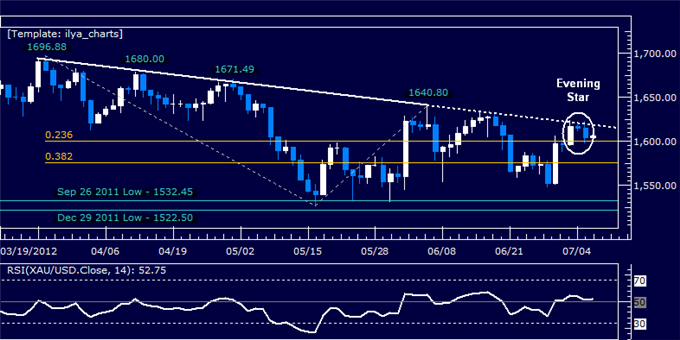 US DOLLAR – Prices are testing falling trend line resistance set from late May, with a break higher exposing the 38.2% Fibonacci expansion at 10219. Near-term support lines up in the 10032-67 area. A break below that exposes multi-month rising trend line support, now at 9940. 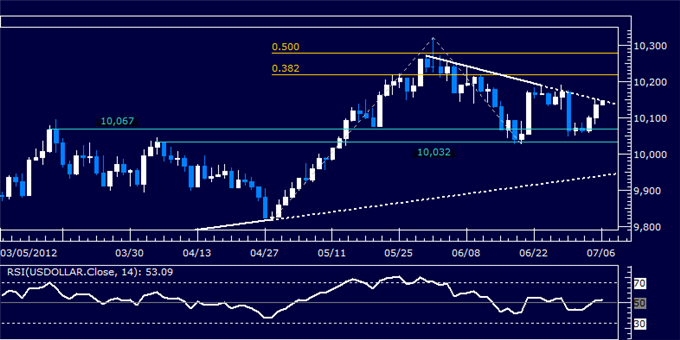