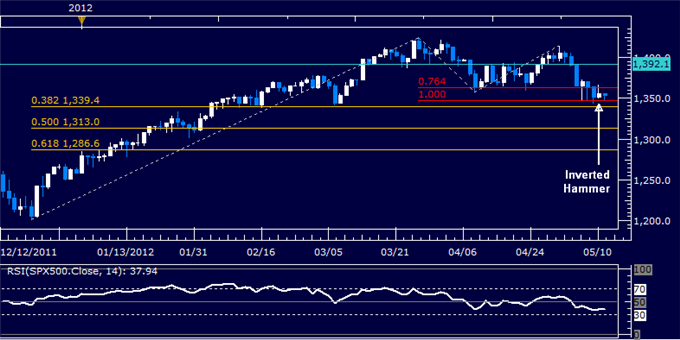 US Dollar May Pull Back Before Larger Rally Continues

THE TAKEAWAY: The US Dollar may pull back to re-test resistance cleared yesterday before the larger advance resumes. The S&P 500 has scope for a parallel recovery.

CRUDE OIL – Prices continue to test support in the 95.78-96.56 area marked by a horizontal barrier in play since early November 2011 as well as the 100% Fibonacci expansion. Similarly to the S&P 500, an Inverted Hammer candlestick hints at the possibility of a corrective bounce. Near-term resistance lines up at 98.89, the 76.4% expansion. A break below support exposes 92.51. 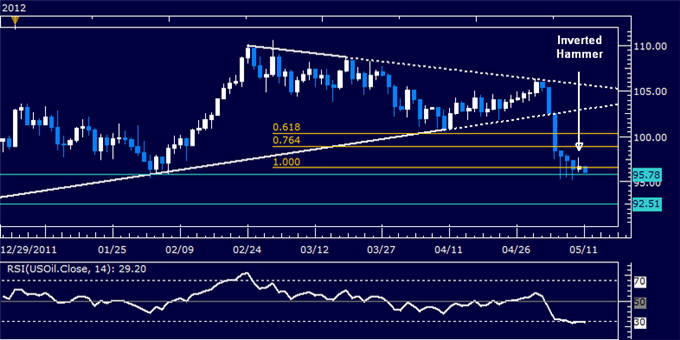 GOLD – Prices are showing an Inverted Hammer above support at 1582.45, the 50% Fibonacci expansion level, hinting a bounce may be ahead. Initial resistance lines up at 1603.42, the 38.2% Fib. Alternatively, renewed selling pressure that takes prices through support would expose the 61.8% expansion at 1561.49.

US DOLLAR – Prices a showing a Hammer candlestick following the break of resistance at a falling trend line set from mid-March, hinting a corrective pull-back may be ahead before the larger advance continues. The trend line, now at 9960, has been recast as near-term support. Resistance stands at 10047, the April 5 swing high.