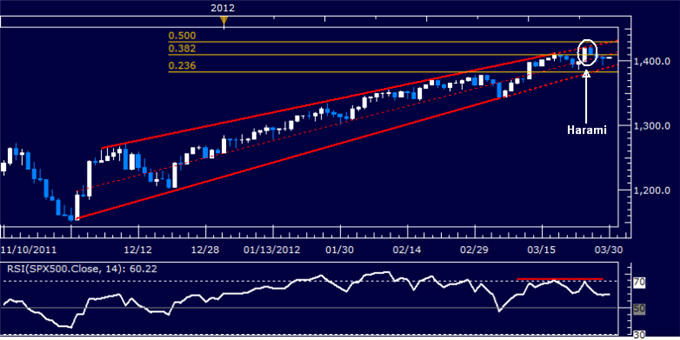 THE TAKEAWAY: US Dollar technical positioning continues to broadly favor gains while the S&P 500 continues to cautiously probe lower toward trend-defining support.

S&P 500 – Prices continue to drift lower after putting in a bearish Harami candlestick pattern below the top of a Rising Wedge chart formation carved out since late November. Yesterday’s break of support at 1408.80, the 38.2% Fibonacci expansion level, exposes the Wedge bottom at 1390.20 and 23.6% expansion at 1383.00. A daily close below the latter level is needed to confirm a more meaningful bearish reversal.

CRUDE OIL – Prices completed a Descending Triangle chart pattern with a break through support at 104.75, the 38.2% Fibonacci retracement level. The setup implies a measured target at 99.57 from here, with interim Fib support levels at 102.97 and 101.19 along the way. The 104.75 level has been recast as near-term resistance.

US DOLLAR – Prices are testing through the 38.2% Fibonacci retracement at 9935 to challenge support at a rising trend line set from the February 8 low. The barrier is reinforced by the former resistance at a falling trend line set from mid-December and the 50% Fib at 9885. A Bullish Engulfing candlestick pattern broadly argues for an upside scenario and would need a close below 9896 to be neutralized. Near-term resistance remains at 9997, the 23.6% retracement.