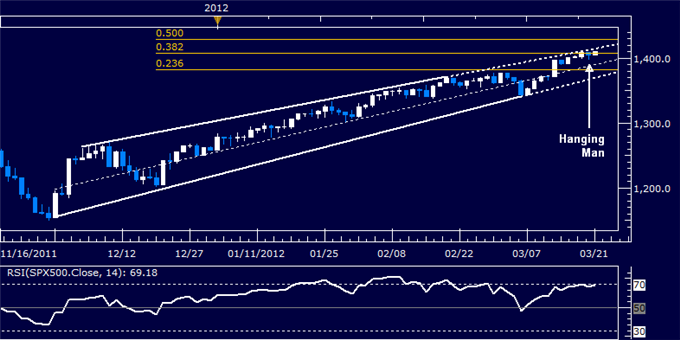 THE TAKEAWAY: US Dollar technical positioning suggests the currency’s corrective decline has been exhausted, with the multi-month uptrend on the verge of resumption.

S&P 500 – Prices put in a Hanging Man candlestick below resistance at the top of a Rising Wedge chart formation being carved out since November, hinting a move lower may be ahead. Initial support lines up at 1390.40, the Wedge “midline”, followed by the 23.6% Fibonacci expansion at 1382.60. Near-term Wedge resistance is at 1416.40, with a break higher exposing the 50% expansion at 1429.90.

CRUDE OIL – Prices put in a Bearish Engulfing candlestick below resistance at 108.32, the 14.6% Fibonacci retracement. It is unclear at this point whether the move markets a bearish reversal or merely a correction to retest recently broken Falling Wedge top resistance. A break of the next layer of support at 104.75 marked by the 38.2% Fib would act as confirmation. 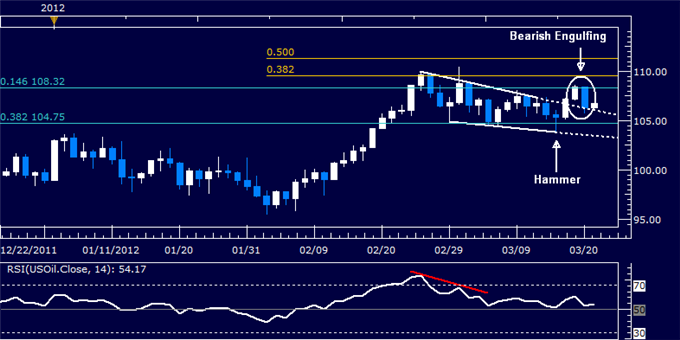 GOLD – Unchanged from yesterday: “Prices continue to carve out a Falling Wedge bullish reversal chart formation, with a Harami candlestick pattern above support at 1638.84 reinforcing the likelihood of a bounce. Initial resistance lines up in the 1666.37-1677.05 area, with a break above that validating the Wedge setup and exposing resistance barriers at the 1700/oz figure as well as 1718.05.” 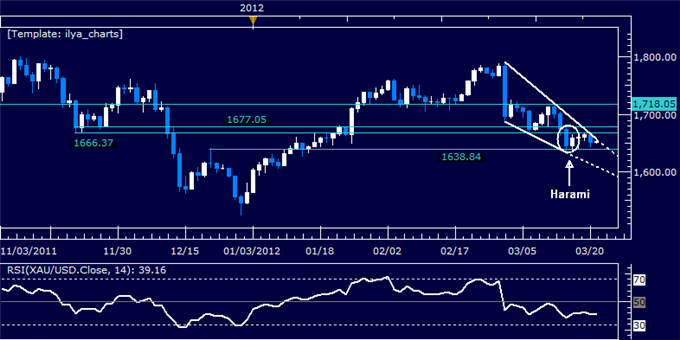 US DOLLAR – Prices put in a Bullish Engulfing candlestick pattern above resistance-turned-support at a falling trend line set from the December 14 swing high, a barrier reinforced by the 38.2% Fibonacci retracement at 9935, hinting a move upward is ahead. Initial resistance lines up at 9997, with a break above that exposing the 61.8% Fib expansion at 10071. Alternatively, a reversal lower through immediate support exposes the 50% retracement 9885. 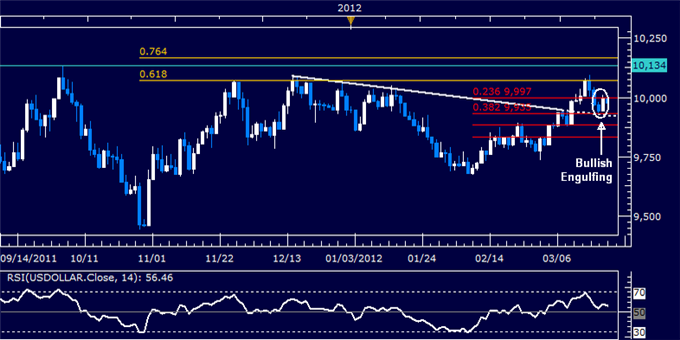