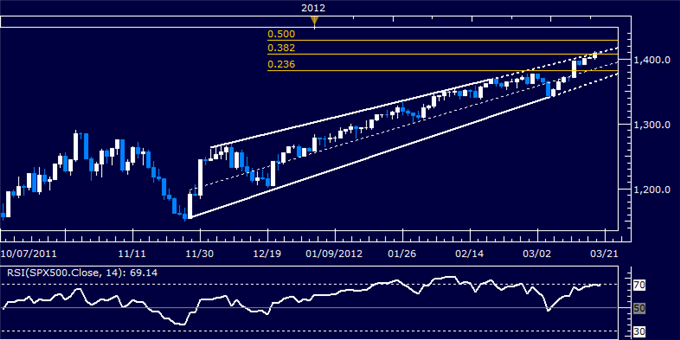 THE TAKEAWAY: The US Dollar is testing critical trend line support. The currency’s behavior here will mark recent weakness as either corrective or part of a larger down move.

S&P 500 – Prices appear to have taken out resistance at 1408.90 at the confluence of the 38.2% Fibonacci expansion and the top of a Rising Wedge chart formation. The move hints the Wedge’s bearish implications have been negated, exposing the next layer of resistance at 1429.70 marked by the 50% Fib. With that in mind, the breakout was very narrow, suggesting it may be too soon to read too much into it for now. A pullback from here sees initial support at the 1400 figure.

CRUDE OIL – Prices followed a Hammer candlestick with a break through the top of a Rising Wedge chart formation identified last week. The bulls have now cleared initial resistance at 107.35, the 23.6% Fibonacci expansion, exposing the next barrier at 109.56 marked by the 38.2% Fib. The 23.6% expansion has been recast as near-term support. 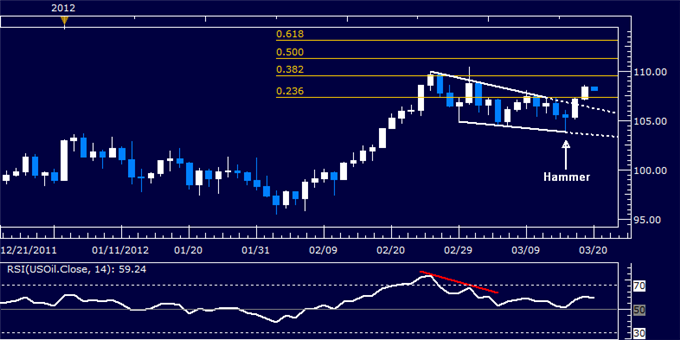 GOLD – Prices continue to carve out a Falling Wedge bullish reversal chart formation, with a Harami candlestick pattern above support at 1638.84 reinforcing the likelihood of a bounce. Initial resistance lines up in the 1666.37-1677.05 area, with a break above that validating the Wedge setup and exposing resistance barriers at the 1700/oz figure as well as 1718.05. 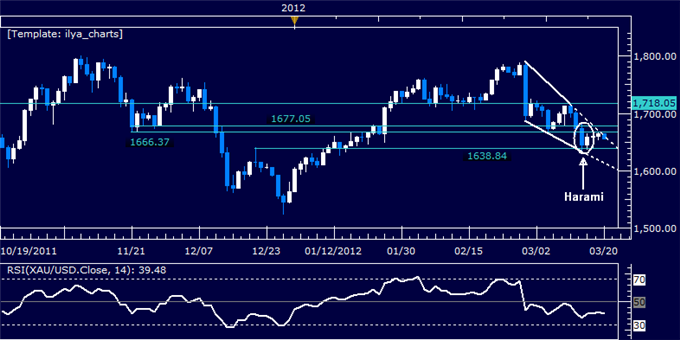 US DOLLAR – As we suspected, prices followed a bearish Dark Cloud Cover candlestick pattern with a move lower. Bears are now retesting resistance-turned support at a falling trend line set from the December 14 swing high, a barrier reinforced by the 38.2% Fibonacci expansion at 9919. A break downward exposes 9824. Near-term resistance lines up at 9995, the 50% Fib expansion. Broadly speaking, price action since 3/15 can be seen as corrective absent a close below the trend line, whose break on 3/9 marked a meaningful bullish development. 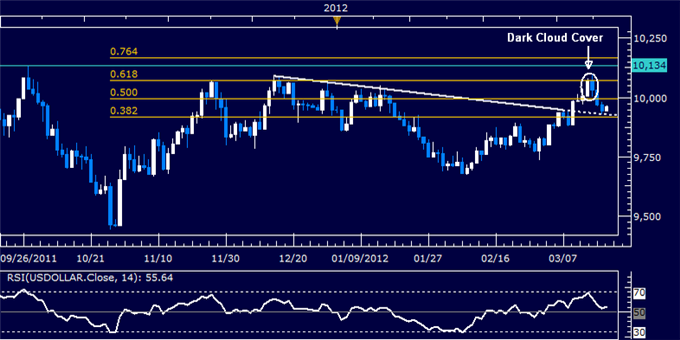