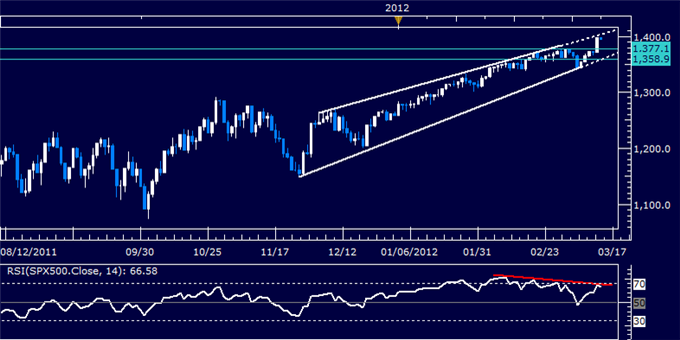 US Dollar Manages to Rise Despite Aggressive S&P 500 Rally

THE TAKEAWAY: The US Dollar managed to rise despite a sharp rally in the S&P 500 that would typically trigger selling pressure for the safe-haven currency.

S&P 500 – Prices appear to be carving out bearish Rising Wedge chart pattern (albeit a bit of an awkward-looking one). Negative RSI divergence bolsters the case for a brewing downward reversal. Initial support lines up at 1377.10. A break below this boundary initially exposes 1358.90, a level currently in close alignment with the Wedge bottom. Near-term resistance stands at the 1400 figure, a psychological barrier reinforced by the Wedge top.

CRUDE OIL – A Bearish Engulfing candlestick pattern continues to argue for near-term losses, with a break below 23.6% Fibonacci retracement support at 106.50 exposing the 38.2% barrier at 104.38. Prices are carving out a downward-sloping chart pattern that can turn out to be a bullish continuation Flag or a bearish falling Channel, depending on follow-through from here. Near-term resistance lines up at 107.67.

GOLD – Prices followed a bearish Dark Cloud Cover candlestick pattern below resistance at 1719.76 identified yesterday with a drop through initial support at 1686.57, the 23.6% Fibonacci expansion. Sellers are now challenging the 38.2% Fib at 1667.71, with a break below that aiming for the 50% expansion at 1652.68. The 23.6% level has been recast as near-term resistance. 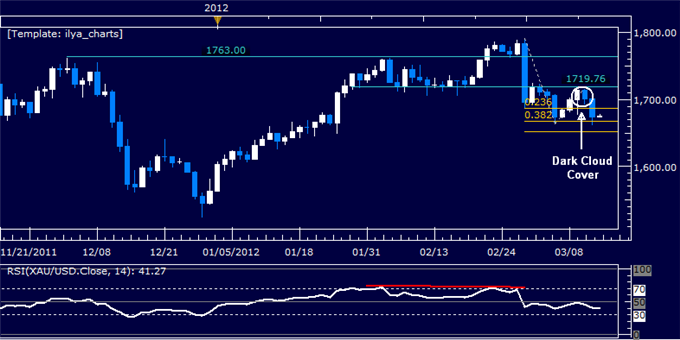 US DOLLAR – Prices narrowly took out resistance at 9995, the 50% Fibonacci expansion level, overturning the Shooting Star candle identified yesterday. The bulls now target an intermediate barrier at 10026 before making a run to the 61.8% expansion at 10071. The 9995 level has been recast as near-term support.