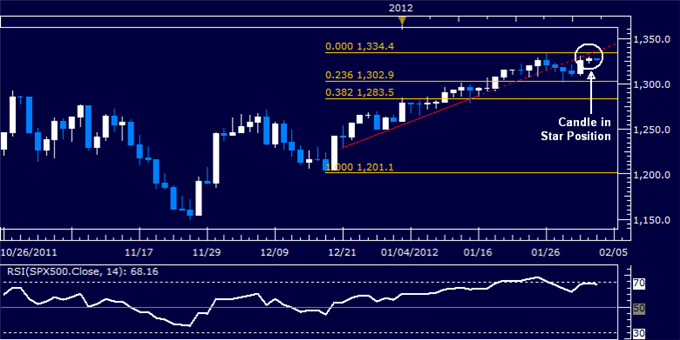 THE TAKEAWAY – S&P 500 technical positioning warns of a pullback while the safe-haven US Dollar is poised to recover, hinting at renewed risk aversion ahead.

S&P 500 – Prices produced a candle in Star position below support-turned-resistance at a rising trend line set from late December, hinting a pullback may be on tap ahead. Initial support lines up at 1302.90, the 23.6% Fibonacci retracement. Major near-term resistance stands at 1334.40, the January 26 high.

CRUDE OIL – Prices continued lower after clearing support at 97.70, with sellers testing the previously broken top of a falling channel set from mid-November recast as support (now at 95.55). A break below this boundary initially exposes the 93.90-93.35 area. The 97.70 level is now acting as near-term resistance.

US DOLLAR – Prices put in a Doji candlestick above 9679, a barrier that has acted as significant support and resistance since August, hinting at ebbing bearish momentum and warning that a reversal may be ahead. Signs of positive RSI divergence on intraday charts (not shown) reinforce the probability of a bounce, though confirmation remains elusive for now. Initial Andrew’s Pitchfork bottom resistance lines up at 9763.