S&P 500 Positioning Hints at Weakness, Offering Hope to US Dollar

THE TAKEAWAY – S&P 500 positioning hints a near-term top may be in place, offering support to the US Dollar and allowing prices to rebound from a key support level.

S&P 500 – Prices put in a Bearish Engulfing below rising channel support, hinting a move lower is ahead. Negative RSI divergence reinforces the case for a downside scenario. Initial channel bottom support lines up at 1311.90, a barrier reinforced at 1307.10. A break below the latter boundary exposes 1285.90.

CRUDE OIL – Prices continue to consolidate above support at 97.70, with the first layer of resistance still at 101.28. A break lower exposes resistance-turned-support at the top of a falling channel set from mid-November, now at 96.27. Alternatively, a push higher initially targets the mid-November high at 103.35.

GOLD – Prices continued to move higher after taking out horizontal resistance at 1677.05 as well as a falling trend line established from early September, with the bulls still aiming to challenge 1750.87. Near-term support stands at the $1700/oz figure, a psychological threshold reinforced by former resistance at the top of a minor channel set from early January. 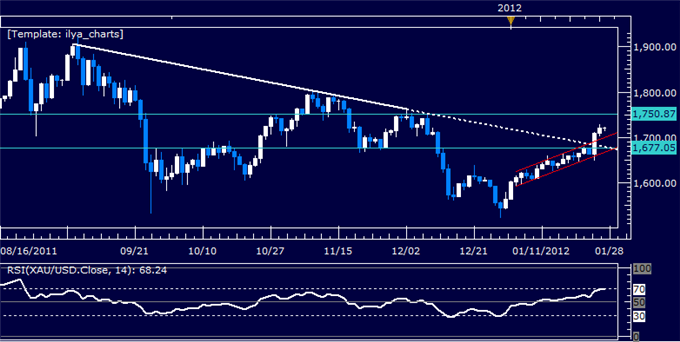 US DOLLAR – Prices are testing support in the 9781-9823 region, a barrier reinforced by the bottom of a falling channel that has confined price action since mid-December. A break below this boundary exposes 9676. The first layer of significant resistance stands at the channel’s midline, now at 9887. 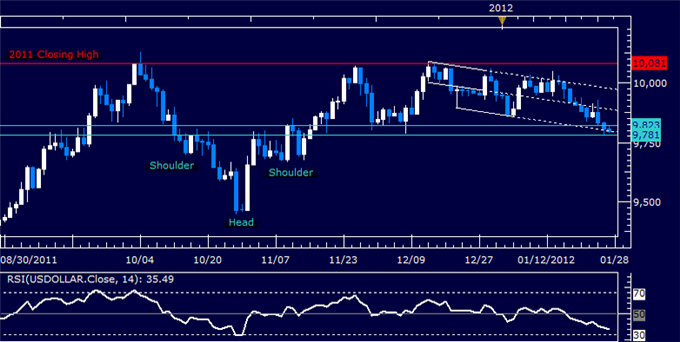