The Friday CoT report, despite the US Dollar Index (DXY) contract still gaining long interest, showed USD selling against most currencies – Euro, Pound, Australian Dollar, New Zealand Dollar, and Swiss Franc. There was some light buying versus the Canadian Dollar and Japanese Yen. Speculators continue to purge oil contracts as the net-long held for some time continues to quickly shrink, a trend which may continue if certain technical developments soon take hold. 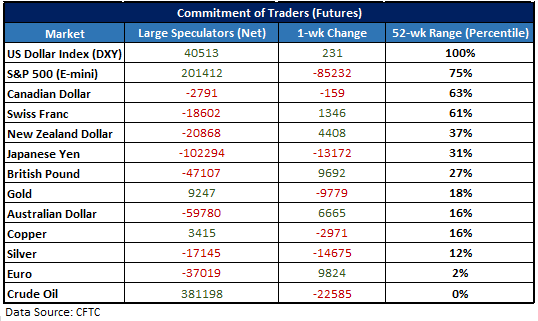 USD speculative longs pared for the most part

Large specs added to their net-long US Dollar Index (DXY) position for a 7th week in a row, but against most major currencies there was a reduction in bullish bets. EUR saw its net-short held by large speculators shrink by nearly 10k contracts to -37k, GBP reduced by a similar amount to -47k, AUD short fell over 6k contracts to just shy of -60k (still near a historical extreme), large specs bought 4k contracts to bring their NZD short to -21k, and the CHF net-short was reduced by over 1k to -18.6k contracts. There was a very small amount of selling in CAD, a whole 159 contracts which netted out to -2.8k in all. JPY was the other major contract which saw its short increase, growing by 13k to over 102k.

Last week’s reversal in the Dollar through the end of the week is likely to show more of the same in the next report. Furthermore, momentum is in favor of a short-term correction in USD at this time. 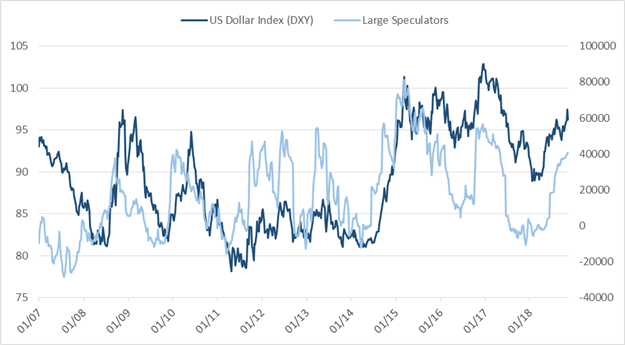 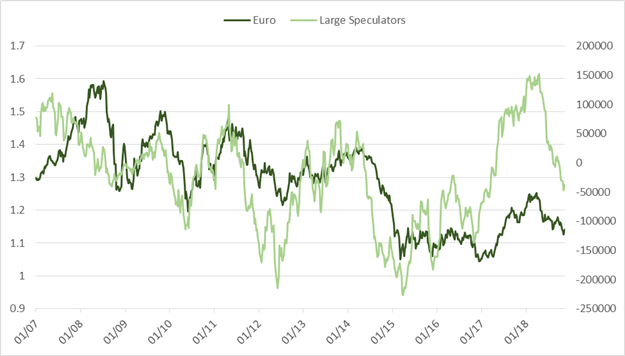 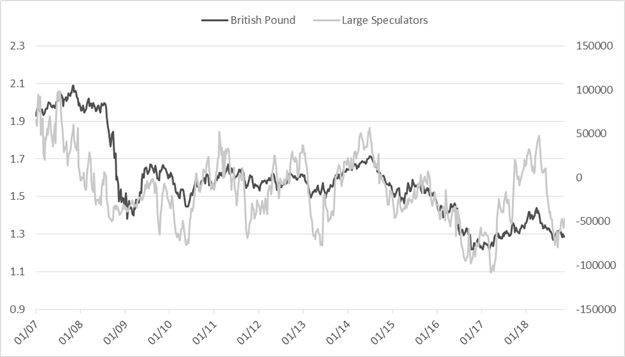 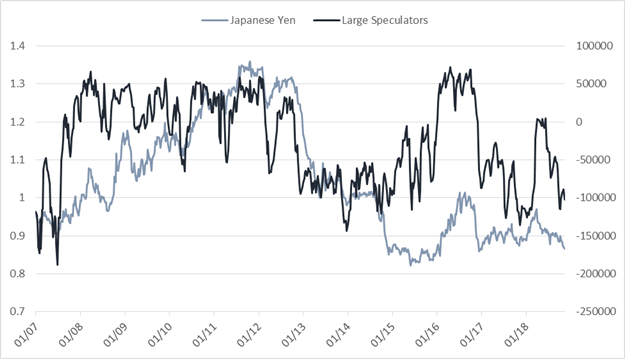 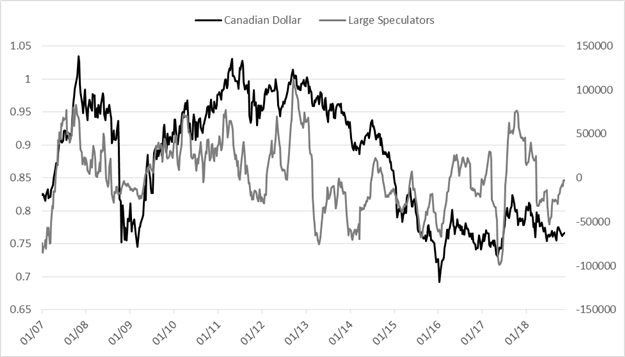 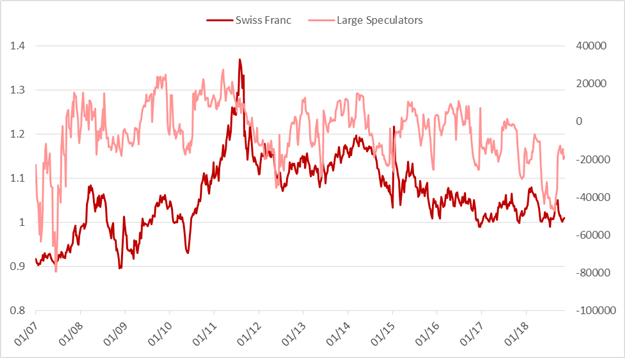 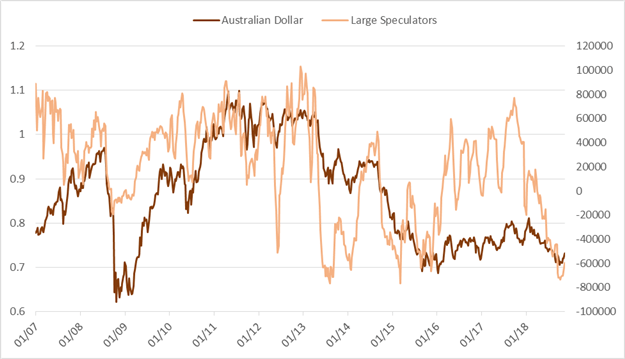 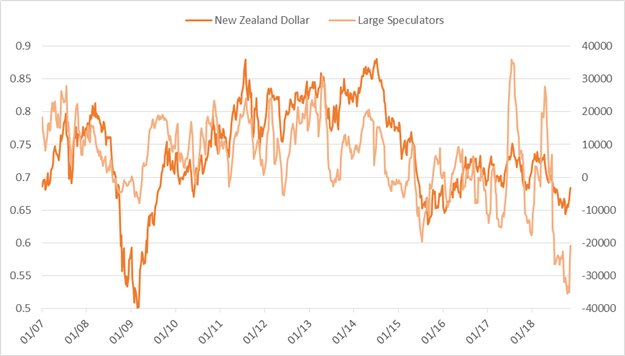 The drop in crude has saw a very overly bullish crowd of speculators reduce their net-long at quite a pace. With the price of oil having fallen so sharply so fast, selling may come to a halt as oil attempts to put together an oversold bounce.

As discussed last week's CoT update, the 4-week rate of change has been one of the fastest additions or reductions in a net position on record. Only a handful of other occasions met or exceeded the pace, with the prior times generally leading to a pause or some type of counter-trend move.

We may see crude try and hang onto the uptrend dating back to 2016, but trend support is in serious jeopardy of breaking (along with the 1998 slope). If trend support breaks then a move to the mid to lower-40s and another round of major reductions in longs could be in store in the not-too-distant future. 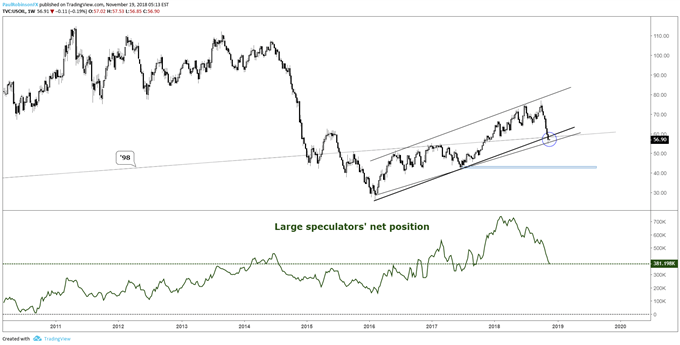 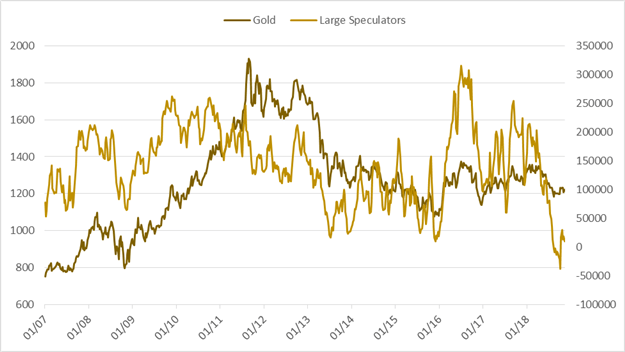 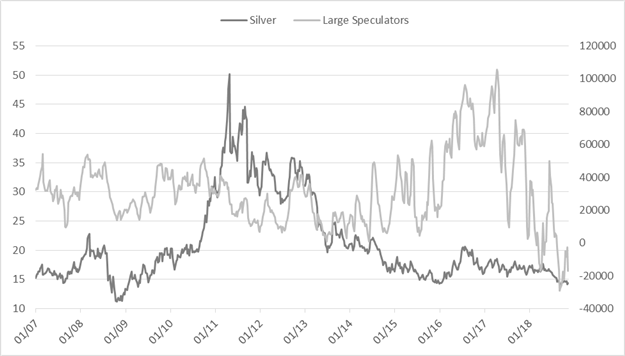 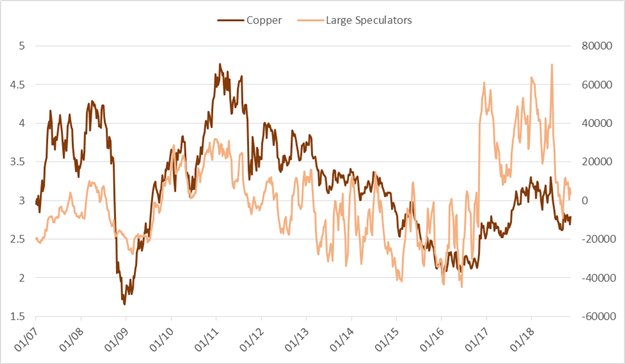 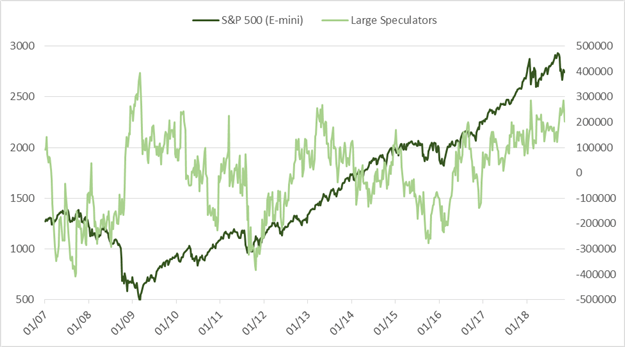