For a timelier indicator of sentiment in major currencies and markets, see theIG Client Sentiment page.

Last week, we looked at one of the more interesting reports in some time, with position profiles of the world’s largest speculators making massive one-week changes in several key markets. This last week didn’t bring the same kind of intense shuffling, but does highlight relative (and net) extremes in currencies versus USD.

Five currencies (EUR, NZD, AUD, CAD & CHF) have position profiles in the bottom 4% or lower of the past 52-week range or longer. A lot longer when looking at CHF, which has a net-short rivaling 2007 levels in recent weeks and AUD shorts which is at its largest since 2015.

The others, EUR, NZD, and CAD, are not at net extremes, but still represent relative extremes when compared to their position profiles over the past year. For example, traders have the smallest position in the Euro in over a year, but they are still net-long by a count of 34k contracts. Gold large specs, too, are holding a very small position compared to the past year, but at +77k contracts the position isn’t considered a net extreme.

So, while generally speaking we are only seeing relative extremes, there is plenty of room for these trends to continue, however; the speed at which these extremes developed suggests that recent selling in key currencies (and gold) has been overdone. 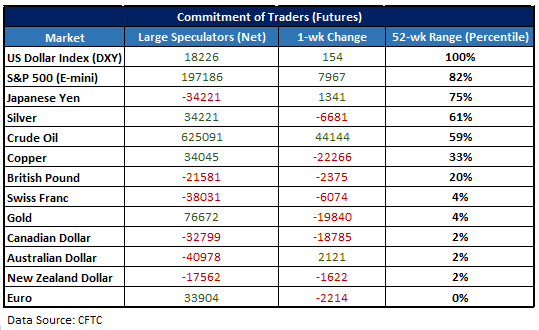 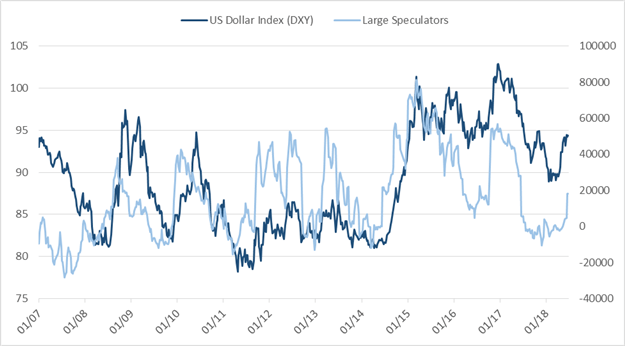 Large spec positioning in the U.S. Dollar Index is at 100% of its 52-week range, but doesn’t represent a net extreme at +18k contracts. 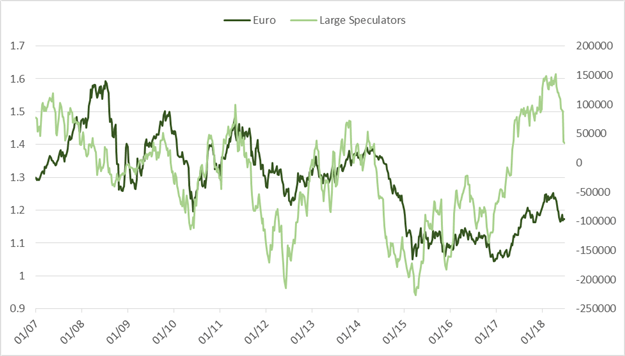 The euro shift recently suggests selling is overdone in the near-term, but traders are still net-long by 34k contracts, so not an ‘actual’ extreme. 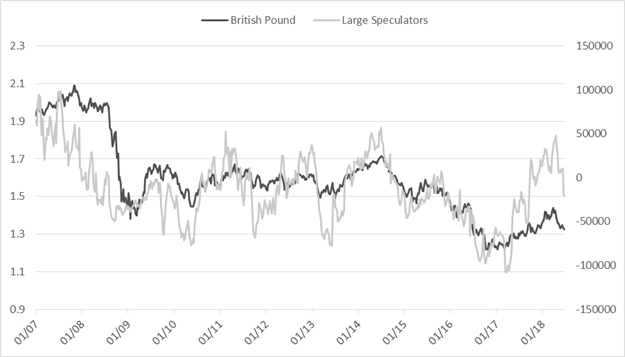 Cable large spec shorts increased by 2.4k contracts to -21.6k, pushing their net-position to 20% of its 52-week range. Also not at a big extreme in net terms. 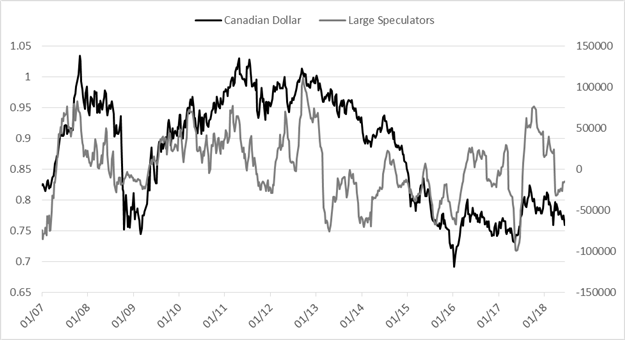 Canadian dollar positioning has been volatile, but at -33k contracts it’s not considered yet a net extreme. Nevertheless, it’s in the bottom 2% over the past year. 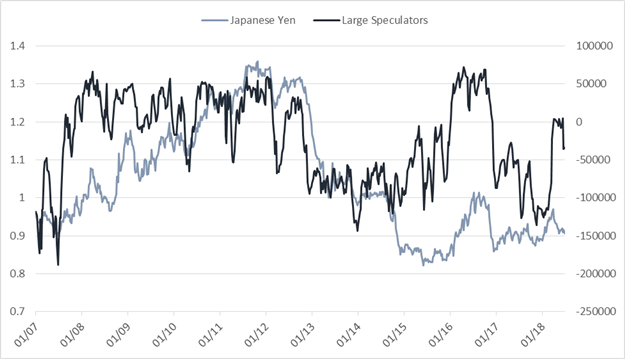 Japanese yen traders are short by 34k contracts, with this position sitting in the upper 75% of the range in the past year. No extremes to report here. 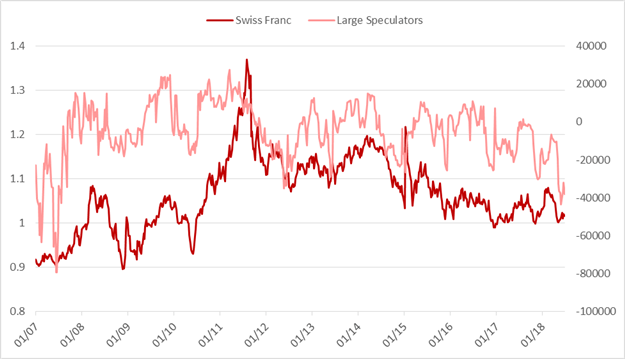 Swiss franc positioning among large speculators is not at its most extreme, but is hanging out in 2007 territory with the group of traders collectively holding 38k contracts short. 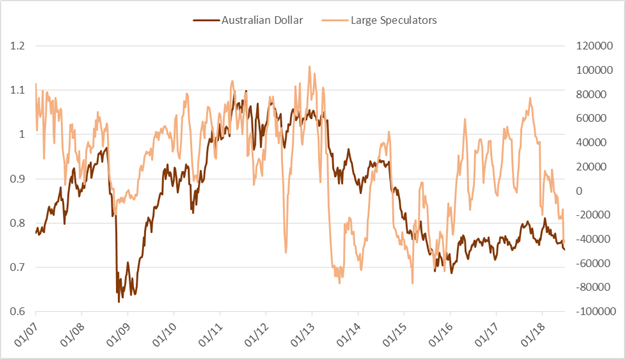 Last week, the net-short in the Australian dollar hit its lowest levels since 2015, and like CHF positioning is at a net and relative extreme. An oversold bounce may be in order. 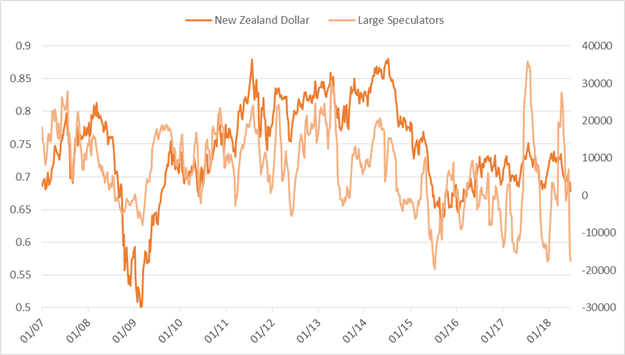 Kiwi positioning dropped 1.6k contracts, expending the net-short to -17.5k. This is very near the lowest levels since 2015 and may soon enter a multi-year extreme along with its sibling currency, the Australian dollar. 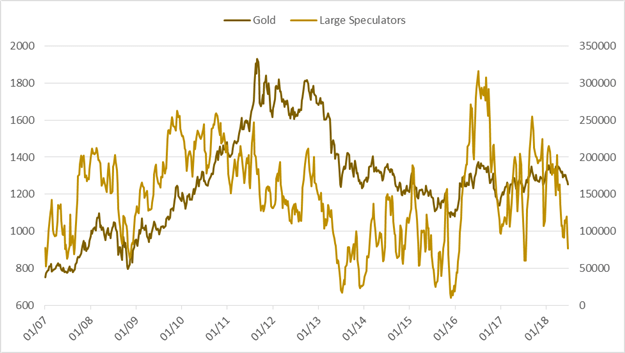 The gold profile shows traders holding a net-long which ranks in the bottom 4% over the past year. But while traders have been selling, they still remain net-long 77k contracts. 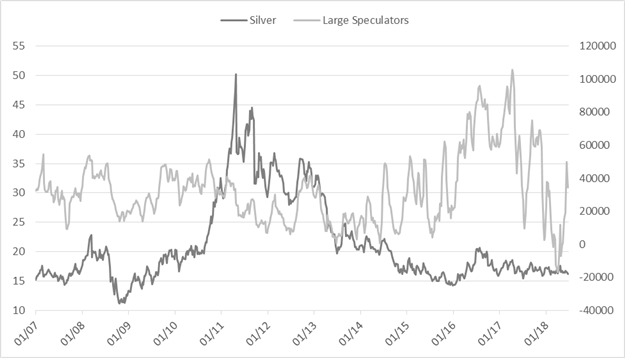 Silver positioning recently ramped up, but cooled in the most recent report by 6.7k contracts to a net-long of 34k. Nothing particularly noteworthy in the short-term. 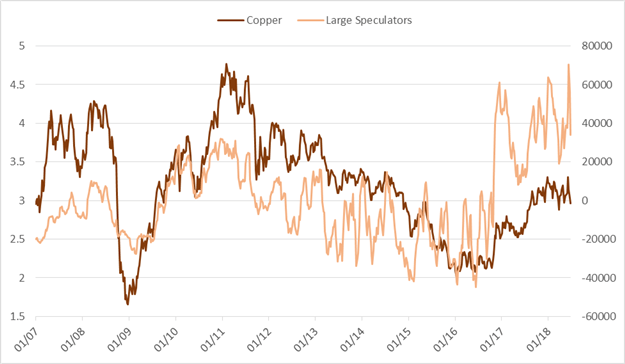 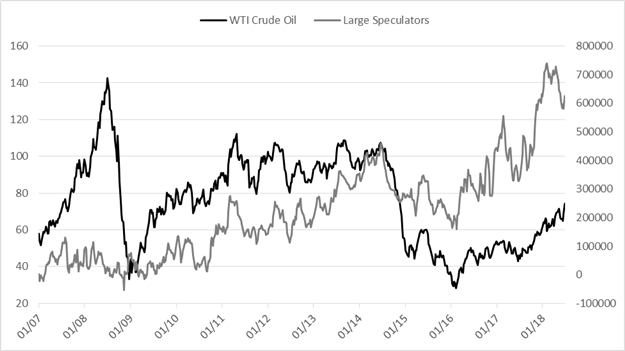 Little to report on crude oil as positinioning ranks at a neutral 59% over the past year, but it’s worth noting that large specs remain generally very long the commodity. 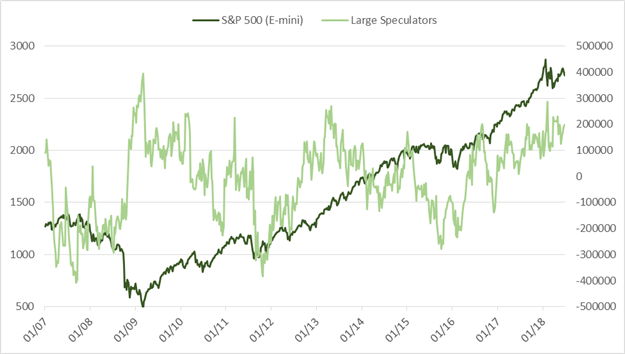 Not too much to report here at this time…