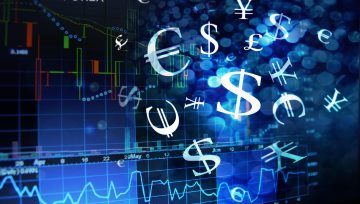 While some of the more prevalent extremes in CoT speculative positioning continue to ease (euro and crude oil), others are building (Swiss and Aussie). Last week, we discussed the large short in the Swiss franc, this week we’ll look at another large short in AUD, as well as provide updates on other major currencies and markets. 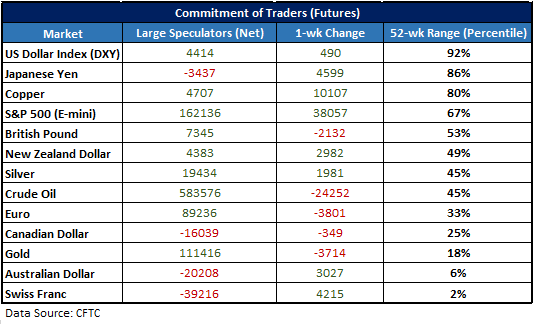 AUD speculative short maintains near largest since beginning of 2016

With the Australian dollar struggling this year large speculators having been hitting bids, building an increasingly large short position. At just over 20k contracts, their current position is not the largest as of recent (-23k last week and two weeks ago were so far), but it has remained persistently around the 20k mark, or the biggest since the beginning of 2016.

Large specs could continue to be right about their bets, at least in the short-term. There is a bear-flag building below resistance, and could trigger at any time now. A break below the lower parallel should have AUD/USD rolling back downhill. 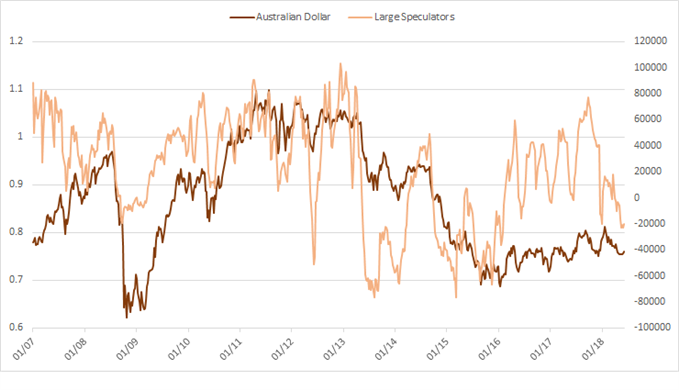 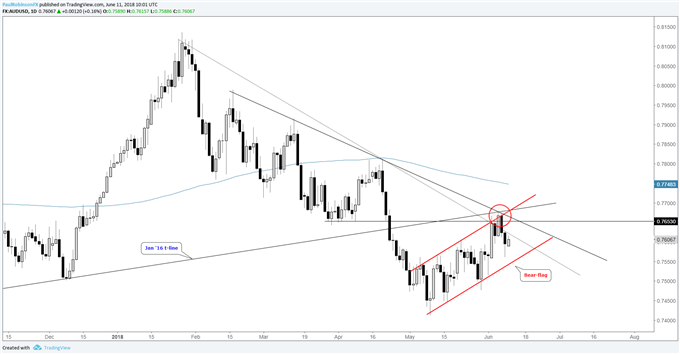 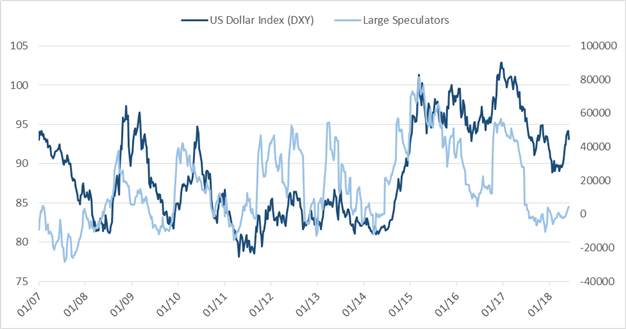 At this time, not much to note from an extreme or trend standpoint in the DXY. 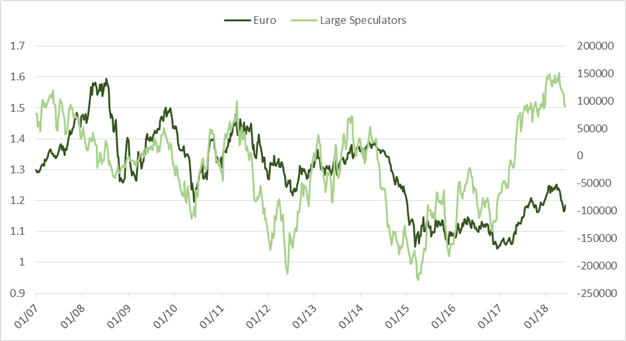 Euro specs continue to offload their net-long position, with it declining for a 7th week in a row to 89k contracts. The euro recently hit longer-term support, but if that fails look for the unwind to continue. 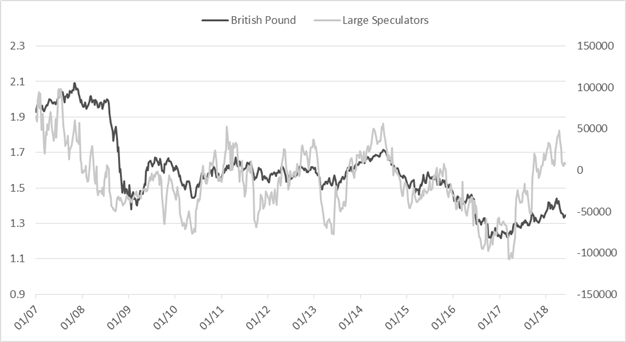 GBP net-long positioning continues to shrink as the currency weakens. At 7k contracts, it’s nearing the zero-mark. At this time, with price and positionig declining in similar fashion there is little information to be gained here. 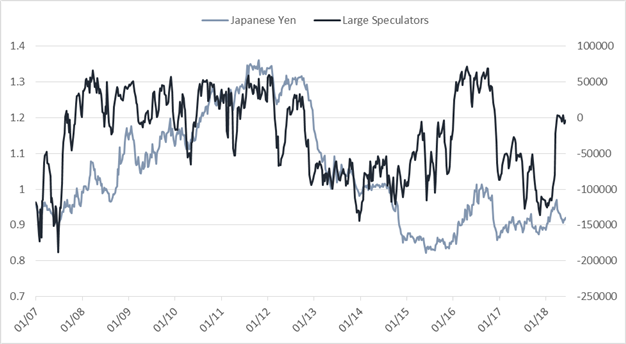 Yen traders have been quiet lately, which is a bit unusual given the relatively large swings in positioning we have become accustomed to. Will update when we see traders shift in a meaningful way. 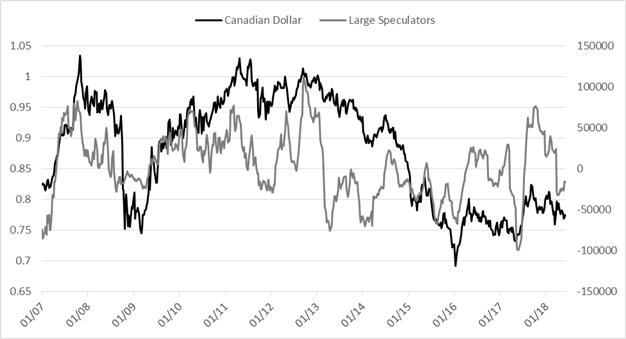 Not much new to report here. The Canadian dollar has been a currency we’ve become wary of with short-term price action having become too erratic for our tastes. 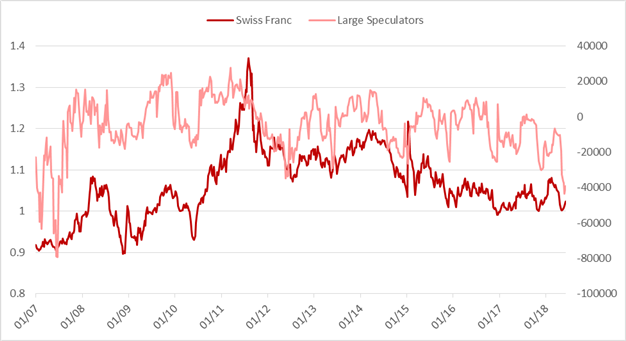 As we discussed last week, Swiss franc speculators have been aggressively selling, pushing their positon to the largest net-short since 2007. The sharp extreme could continue to be supportive for a rebound as positioning corrects. 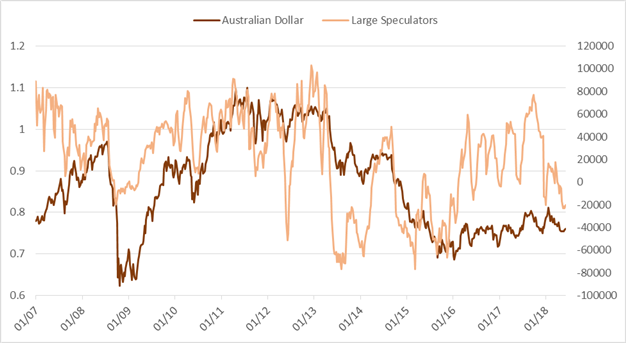 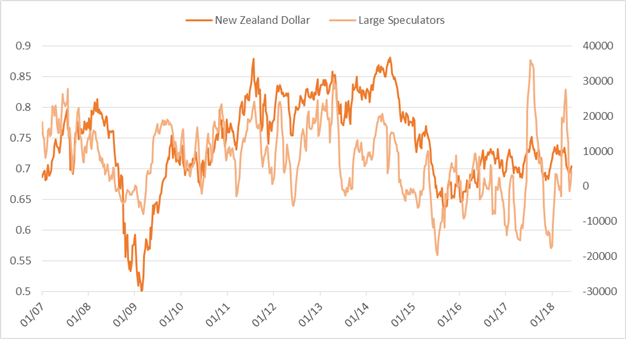 Volatile position changes yet no real net movement over the past couple of years. This makes getting a read on kiwi positioning difficult outside of when there are extreme readings, of which we do not have at this time. 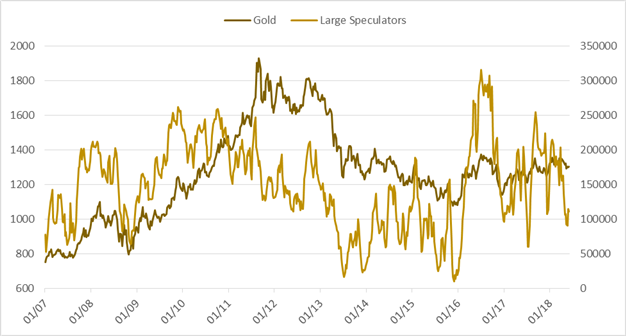 Gold positioning remains generally heading lower, but we are seeing a recent renewed interest in a bullish bias. Gold has been very choppy year-to-date, so reading too much into positioning amidst the noise isn’t providing any clean signaling. 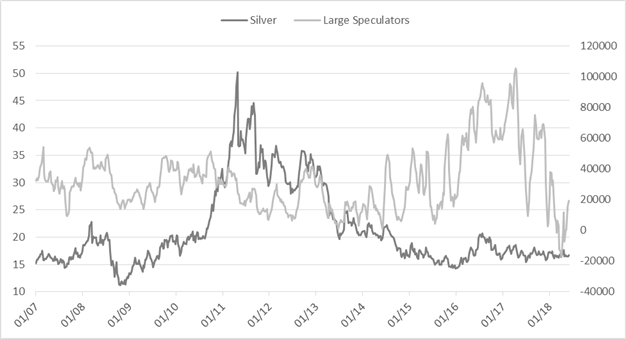 Silver traders are back to buying the precious metal after turning net-short a few months back for the first time since 2003. Price action is extremely range-bound, and until it can break free we’ll reserve judgement for a later time. 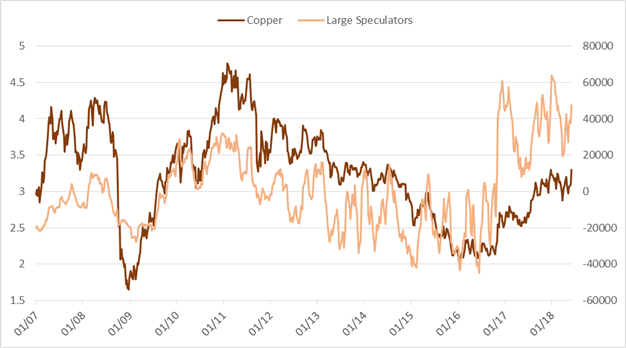 Copper blasted off last week, and large specs have generally been correctly buying the uptrend over the past year-and-a-half. 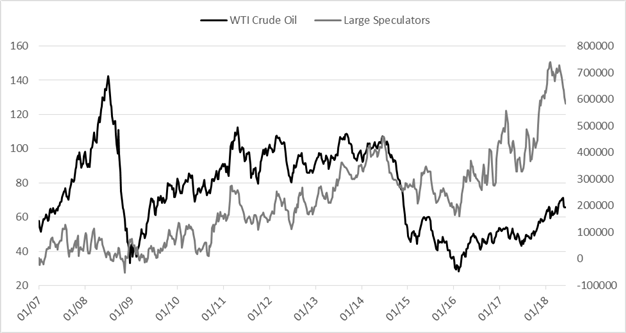 The record net-long in crude oil continues to decline with the price, a long overdue correction in positioning. The trend is still higher, but if oil doesn’t soon turnaround we may see the last bunch of longs who added during the early-part of the year heading for the exits, helping fuel a larger sell-off. 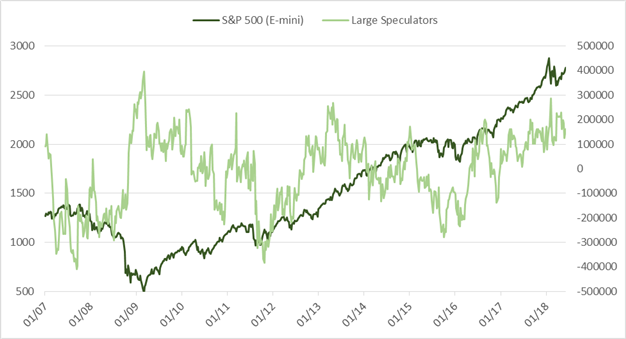 S&P 500 remains a mystery to traders; is it topping or consolidating? We’ll wait for more information before drawing any concrete conclusions.