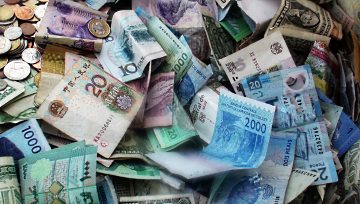 Every Friday the CFTC releases the Commitment of Traders (COT) report, which shows traders’ positioning in the futures market as reported for the week ending on Tuesday. In the table below, we’ve outlined key statistics regarding the net positioning of large speculators (i.e. hedge funds, CTAs, etc.); also known to be trend-followers in terms of the type of trading strategies deployed. 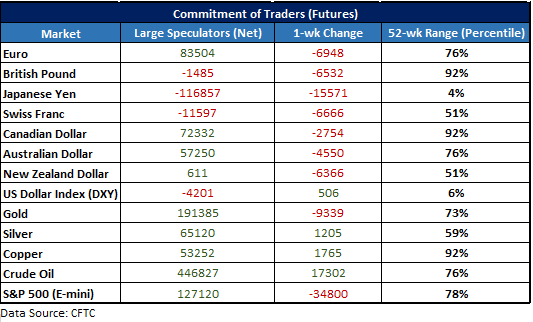 Euro – At 83.5k contracts, large speculators have reduced their net-long by only about 15k contracts from their largest position seen during the current bullish-cycle of 98.1k, which was just shy of the highest level since 2011 (99.5k) and not too far from the record high in 2007 (119.5k contracts). The smallish reduction comes despite the euro having fallen several hundred pips from its September high. Last week’s break below the ‘neckline’ of the nearly 3-month ‘head-and-shoulders’ pattern took place on Thursday, which means the intense selling we saw the final two days of the week and anymore which might come through tomorrow won’t be reported until this Friday’s report. It will be interesting to see if large specs are throwing in the towel as the once-working long position continues to move in reverse. 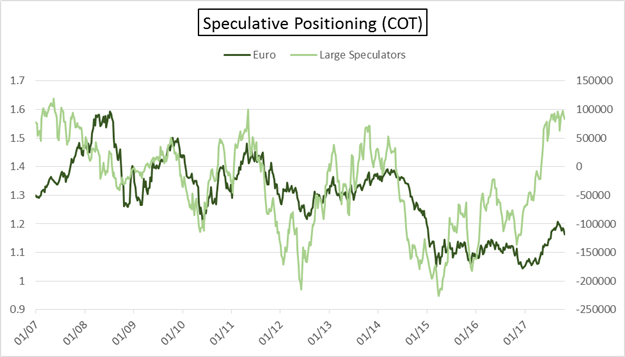 Canadian dollar: Here is a bunch (large speculators), who despite aggressively declining prices, don’t want to budge on a bullish bias. At 72.3k contracts, their net-long is only off from the current cycle high of 76.4k recorded a couple of weeks ago. Until we see an alleviation in positioning it looks as though pressure will remain on the Canadian dollar for the foreseeable future. 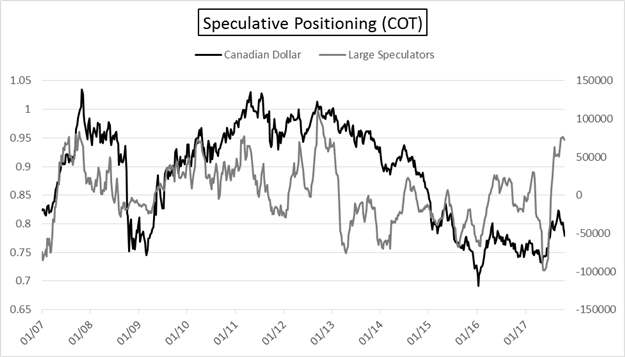 Australian dollar: Large speculators reduced their position for a fourth straight week, but at 57.3k contracts the net-long profile remains quite elevated and not moving lower with anywhere near the same intensity as the price of the currency. Until we see a further unwinding of bullish bets there remains plenty of supply to keep aussie on the defensive. 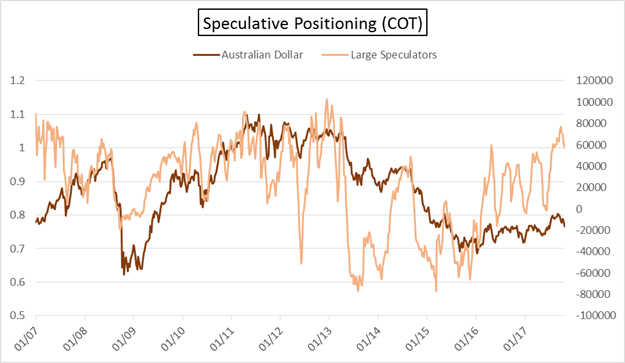 New Zealand dollar: The recent changes in the positioning profile for this currency stands out from the group, as large speculators in the past three months have taken their largest long position on record of 36k contracts and reduced it to nearly flat (+611) last week. While it has been an extreme move over that period, 10 out of 14 weeks we saw a reduction in position-sizing which one would expect to see given the price action. The 6366 contracts offloaded this past week was the second largest week of selling since the top in July, and with it bringing the net-long to nearly flat, and on that kiwi may be ready to bounce. There is price support in the area, which also backs up the notion that perhaps selling has become overdone in the near-term and kiwi is ready for a relief bounce. 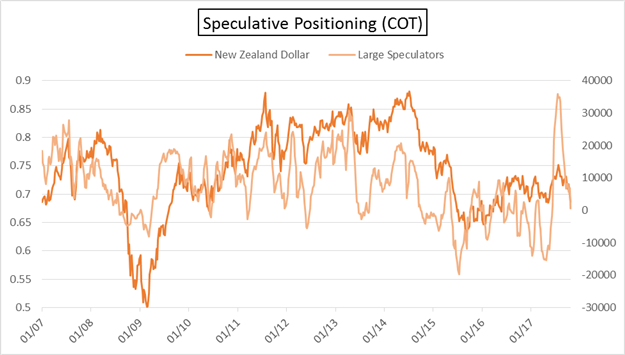 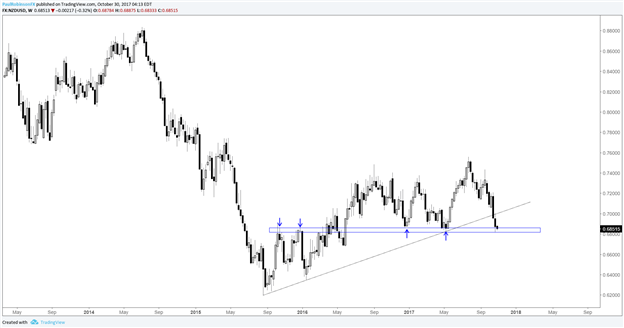 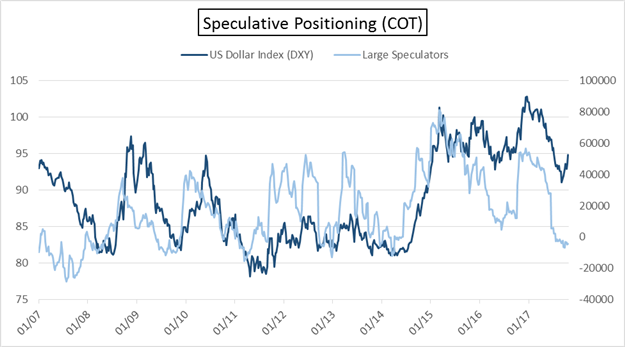 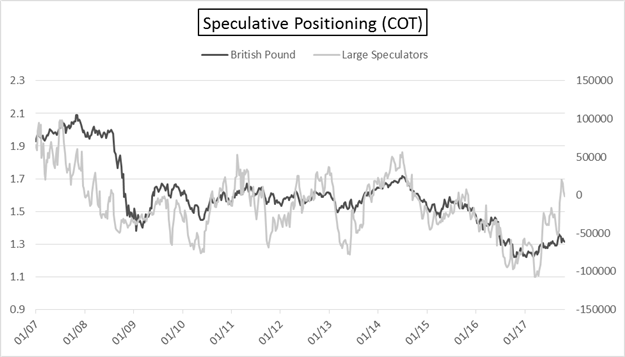 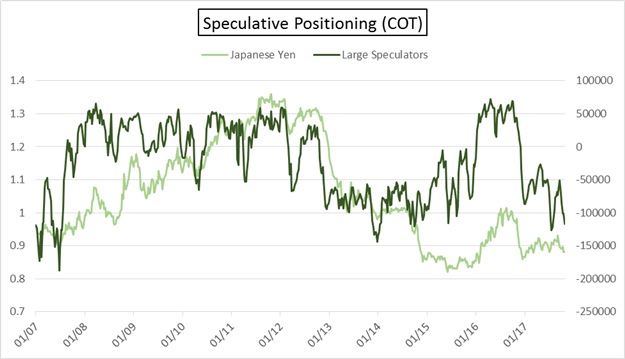 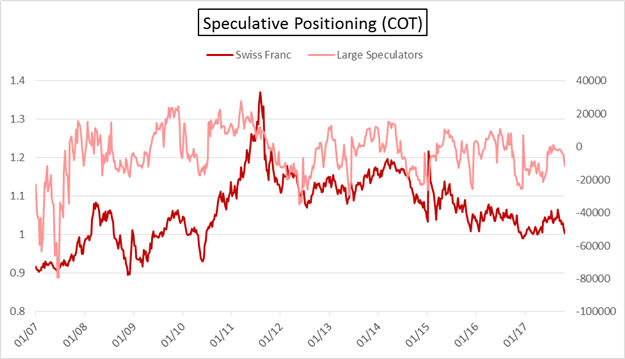 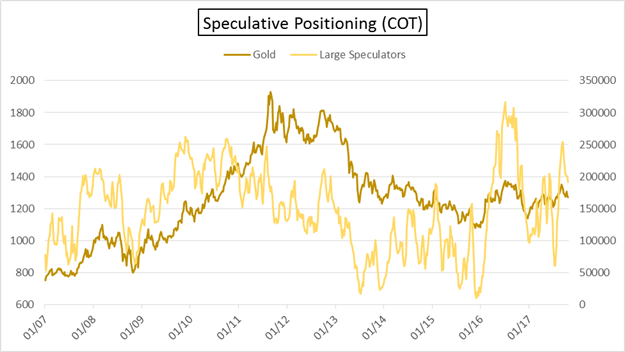 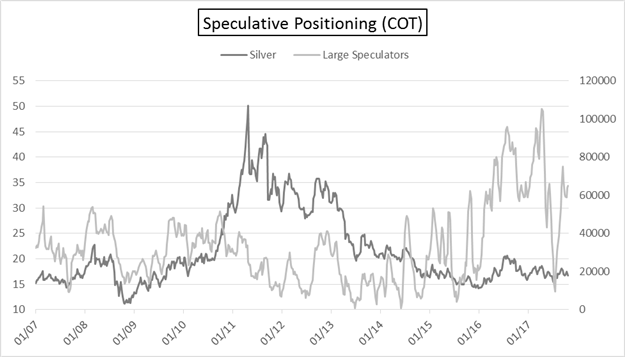 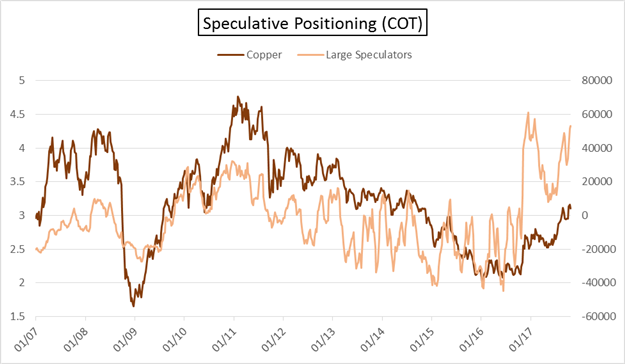 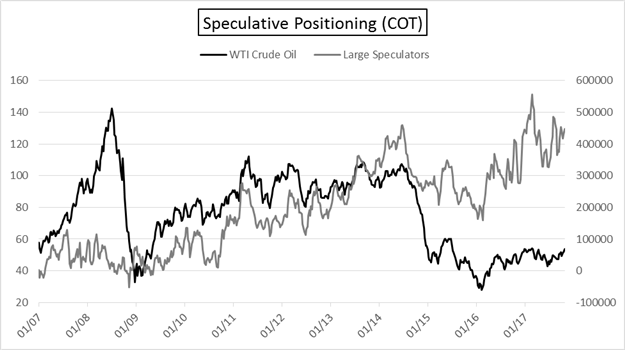 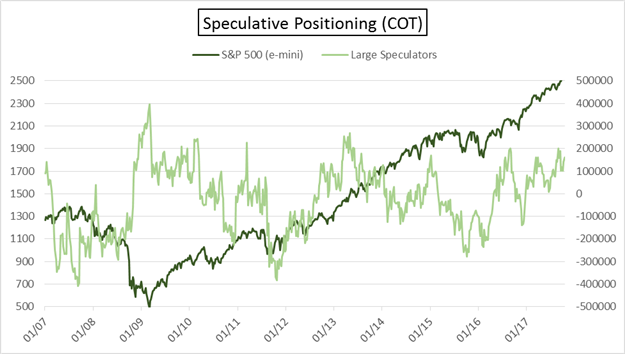