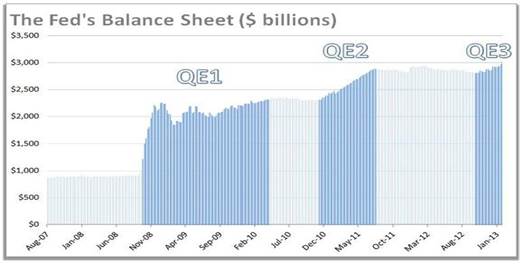 Article Summary: In a heroic effort to help spur growth in economies, QE comes to the rescue. central banks around the world have implemented this policy to not only move their economies forward, but to achieve long lasting prosperity.

When it comes to thinking about how the world created higher inflation, higher stock prices, housing market booms, and better, stronger GDP's, What comes to mind?

QE, was not just brought up randomly, as it has been around for some time. John Maynard Keynes in 1932 developed this program after the "The Great Depression" where he argued capital needed to be stabilized in a financial system. QE justifies this.

Before using this term freely, we must know what Quantitative Easing is, or QE. Today, as it is known to be in the modern financial world, is a program that tries to revive a financial system from collapsing. Essentially, central banks increase the money supply in the financial system by purchasing assets (long term bonds) from financial institutions (e.g. banks). With doing so, this increases the amount of reserves on hand for financial institutions so they can lend more to consumers which in turn should lead to more spending and borrowing. Further, to increase spending, central banks lower interest rates to encourage spending even more. With all this money floating around, the amount of liquidity increases which causes people to feel confident about investing, and or buying. The idea of QE became apparent to global economies because they faced financial crisis, (US Financial Crisis, JPY Deflation, ECB Sovereign Debt, etc.).

Over twelve years ago, The first central bank to utilize and implement QE was in 2001 by the Bank of Japan. The Japanese economy was (and still is) facing deflation (prices falling). The BOJ implemented QE to try and reflate the economy back to prosperity. They purchased Japanese government bonds (JGBs) with long term maturities to help spur spending into riskier assets amongst consumers/investors. The overnight cash rate fell close to 0% making it easier to borrow, and the Nikkei was gaining. However, the Bank of Japan lifted the program five years (2006) later as due to a shortage of JGB's. QE's life didn't stop there though as it spilled into the US Federal Reserve's mind, Bank of England’s pocket, and European Central Bank’s hands.

With these central banks, there were many attempts:

2. Bank of England (started in 2009) implemented QE when the financial crisis in the US happened . They too used QE not once, but two rounds of bond purchases (QE 2 presently).

3. ECB or European Central Bank - After the creation of the EURO in 1999, Europe, especially Greece had a spending and borrowing problem. This problem turned into the sovereign debt crisis that still exists to this very day. The ECB enacted QE and austerity measures to help spur growth, job creation, and inflation. Presently, the ECB has initiated the second wave in 2013.

4. The Bank of Japan is currently in their second round of easing as they lifted their second program due to a JBG shortage in 2006. Moreover, with this massive amount of easing by the BOJ, the amount of debt has amount to over one 1 Quadrillion! (see chart below, Report Here)

Now, that we know when, where, and why QE took place the million dollar problem with QE is its effect on currencies.

To understand this we must look back to the basics of economics (supply and demand). In QE, central banks INCREASE the supply of dollars by printing/purchasing new money, and DEMAND is supposed to increase so that prices of goods and services can go to the central banks inflation target of two percent.

An increase in prices causes competitiveness and a rise in the value of the dollar. If consumer price inflation goes up that means the purchasing power of the dollar is up. However, in the currency system today inflation is below the central banks two percent target making demand for goods and services not that strong, and the SUPPLY of dollars has been steadily increasing every month. This uneven balance has caused a surplus in the system, which has caused currencies to be devalued. Now, when I mean devalued it simply means that their needs to be more dollars to purchase more goods and services.

Try this for example: I owned a 2005 red Camaro (that would be nice), and I had it since high school. I went to college, got a job, and bought another 2005 red Camaro. One Camaro isn’t necessarily better than the other, but I decided to use the newer one instead. In essence, the more of something you have, the less valuable (Camaro) it will be.With central banks either increasing or decreasing the money supply this hurts the value of currencies.

Currently, the US financial system is taking every drop of stimulus it can get as policy makers believe that more needs to be done (labor market needs to improve as of last week (8/2/2013) which signals that stimulus needs to be maintained. The DXY index has fallen from its high of 84.58 almost one month ago year –to-date due to QE concerns. The DXY index currently sits at 81.32 (8/16/2013) due to concerns that QE may be tapered SOON.

With currencies being devalued, stock markets rising, and central banks deciding when to pull out of their QE programs, Quantitative Easing has received a lot of speculation, and outright criticism.

First, a potential risk that could get even worse is a currency war. Major institutions around the globe (BOE, BOJ, and ECB) have taken serious measures to try and spur growth in their respective economies. As we know in QE, currencies become devalued. With devaluing currencies, comes the concept of Trade. Trade happens every day around the world where there is an inflow and outflow of capital.

For example, when a country exports goods and services capital flows out of the country and dollars are sold. When exports are strong, this creates a demand for more goods and services which requires more dollars (value of dollar increases).

Exports and imports are affected when currencies are affected. The more sales of exports an economy has the more chance that a central bank could raise interest rates, and therefore believing an economy is improving steadily. But, as we can already see, central banks have already devalued their currencies with QE which has added pressure to Japanese, China, Australia, New Zealand, and European exports. Hopefully, the “war” can stop soon otherwise major economies are going to struggle!

Secondly, another potential risk to QE is asset bubbles. The reason this is a potential risk is when a bubble pops, trouble happens. When cheap money is pumped into an economy each month equity markets rise, housing markets become the bright spot, commodity prices go higher, and bond yields fall lower. The bubbles will have to bust at some point, and a major sell off could happen, and or disaster (Financial crisis in the US).

Thirdly, with QE, Interest rates have been cut, and having them low for too long can hurt pension funds, and savers. When interest rates were cut, central bankers cut interest rates towards 0%, hoping consumers are going to spend a lot more rather than save. But, when you spend so much it takes away from pensioners, and your bank account because you are not saving as much.

Finally, another major risk, is collateral damage to the bond market Yields have been pushed down to fresh lows, and stocks have been on the rise. Where do you invest? This comes to the conflict of yield. The hunt for yield is on because you can’t get in on the bond market, but instead have to secure profits into riskier assets. When investors don’t know whether the central banks will taper or not, they look for yield to help make sure they get a little bit of return just in case they do decide to taper.

Taper or Not to Taper?

Conclusively, because QE has had a major impact on the global financial system (whether it be good or bad), there is always a tradeoff. Whether it'd be higher stock prices, higher interest rates, or the value of currencies going down, there are always benefits and costs that need to be weighed. It is up to us to make our respective economies go the way we want it to with or without Quantitative Easing.