The Euro continued to struggle against the US Dollar on Thursday, with the greenback bolstered across the board by the United States Federal Reserve’s monetary policy decision in the previous session.

In terms of interest rates, the markets got exactly what they were expecting, with a well-flagged three-quarter point increase duly delivered. However, hopes were quite strong that Fed Chair Jerome Powell would announce a definitive retreat from aggressive monetary tightening. In the event he did no such thing, cautioning markets that borrowing costs may yet have to rise substantially if inflation is to be curbed.

While this may seem to be at least somewhat a statement of the obvious, it gave the Dollar an across-board lift, with the US central bank still clearly out in front when it comes to appetite and ability to tighten its monetary screws.

European Central Bank President Christine Lagarde warned this weak that Eurozone interest rates will have to keep rising too. Well may she do so, with consumer price inflation at record levels in the currency bloc. However, conflicting tolerances for higher rates within the economies of the eurozone look set to make her job an even more tricky balancing act than usual, and the markets know it. The ECB has increased borrowing costs by a total of two percentage points over the past three monetary policy meetings, taking them from minus 0.5% to 1.5%. However these are baby steps compared to the Fed’s more confident strides

Markets expect more of the same, so the Euro lacks monetary support in the global market. It’s also short of fundamental props, with an inflationary cost-of-living crisis sapping consumer morale across the Eurozone. Germany is of course the currency area’s engine room. It now wrestles with the need to wean itself off reliance on Russian gas as the war in Ukraine grinds on. Partly as result, Eurozone growth slowed sharply in the third quarter of this year.

The gloomy fundamental picture for EUR/USD is fully reflected on the technical charts. 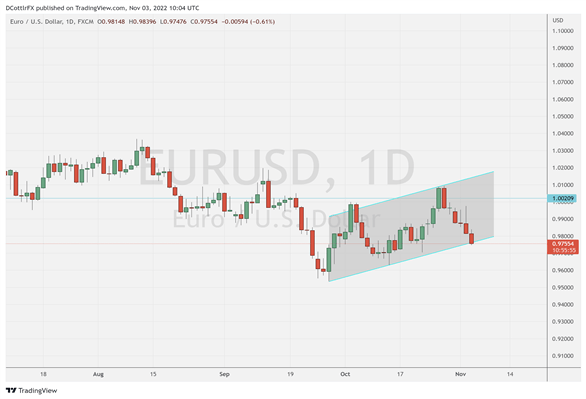 The modest uptrend channel seen on the daily charts since late September looks set to be wiped out with its lower bound under obvious pressure. Should that give way, focus will immediately turn to the intraday trading low of September 28, which was 0.95400. That in turn was the lowest point seen for a little over twenty years, and a slide below it will see an extension of the long EUR/USD downtrend which has been in place since December 2020 since when the pair has only managed to end five months higher than it began them.

The lows of 2000 and 2001, which took the pair down to the 0.82 region will come into uncomfortable focus below current levels, with sentiment toward the pair unsurprisingly bearish according to IG data.

--by David Cottle for DailyFX