Gold prices are holding above psychological support at $1650/ounce Wednesday as the precious metals market, of course, joins all others in eyeing the United States Federal Reserve’s monetary policy decision later.

The Fed is expected to raise borrowing costs by three quarters of one percent with inflation still uncomfortably high in the US, if under better control than elsewhere in the developed world. However, Fed Chair Jerome Powell is also heavily tipped to say that any future aggressive increases from here will be data dependent. The Dollar has duly lost a bit of gloss as market participants anticipate this moderately ‘dovish’ shift from the world’s most important central bank.

If the Fed Disappoints, Gold Could Slide Again

The risk for gold bulls is that the Fed under-delivers here. A statement perceived by the markets as more hawkish than expected could well put fundamental pressure back on gold. Prices have been moving steadily lower from the heady peaks above $2000 seen in March as relentlessly rising interest rates weigh against non-yielding gold, and force a rethink of the assert as any kind of hedge against inflation.

Indeed, gold’s 1.6% fall in October means prices have slid for seven consecutive months, prompting Deutsche Bank researchers to note the longest slide since 1869. However, if the Fed’s mind turns out to be as the market expects, it will be fascinating to see whether gold can push higher from current levels, which have essentially underpinned the market since late September. 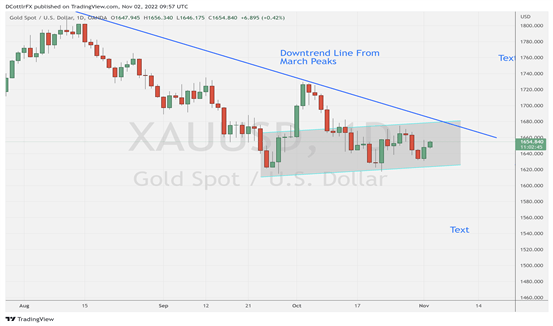 We’ve become accustomed to seeing gold under pressure this year, but the fightback seen since September has been quite dogged, if unspectacular. As can be seen from the chart, the current uptrend channel now intersects with the dominant downtrend line which has capped the market since March. If prices can remain within this channel then a significant challenge to that rend could be seen shortly. Of course, the last such challenge was swiftly rebuffed, as we can see from the price action on October 5 and 6, but a new attempt might just be starting from a stronger base and could prove more lasting as a result.

For now watch our for a test of that upside channel top. It comes in at $1681.43, extremely close to that 50-day moving average. A slide below the channel base, meanwhile, would probably see this month’s lows retested very quickly.

--By David Cottle for DailyFX