USD/JPY Slips Back As Market Looks To Fed Chair Powell

The Japanese Yen saw some modest gains in Tuesday’s trade in a market clearly settling down to hear what the United States Federal Reserve will do and, perhaps as importantly, say, at the end of its midweek meeting Wednesday.

The market is looking for another three-quarter point hike in US interest rates, the latest in a series aimed at bringing rampant inflation to heel. Assuming this is delivered, market attention will be firmly on the Fed’s tone. It’s widely expected by economists that the central bank will ratchet back from any aggressively hawkish commentary, emphasizing instead that future rate rises will depend squarely on how inflation now responds.

Rising US interest rates this year have of course lent the Dollar extraordinary support against all major currencies. The Yen has been particularly hard-hit, though with the Bank of Japan still unwilling to raise its own ultra-low borrowing costs. The resultant widening yield spread to the greenback’s advantage has seen USD/JPY rise back to levels around 150, not previously seen since 1990.

For their part, the Japanese authorities have opted to act in the market to try and cushion the Yen’s fall. Japanese Finance Minister Shunichi Suzuki reportedly said on Tuesday that the country’s interventions in the currency space have been ‘stealth operations’ in order to maximize their effects. This comment came after Tokyo spent a record $43 billion supporting the embattled Yen last month alone. It is likely to spend a lot more in the months ahead.

Long-serving Bank of Japan Governor Haruhiko Kuroda said on Tuesday that ultra-loose monetary policy must be retained to support a Japanese economy still struggling with the aftermath of Covid 19. With this in mind, the Yen looks likely to remain in the bears’ sights, at least while other central banks are tightening their own monetary screws. There may be some scope for a modest fightback if the Fed sounds more dovish than the market expects this week, but for now the Yen’s main fundamental hope probably lies in that aggressive but stealthy official intervention continuing.

The USD/JPY’s daily chart shows the pair has yet to recover from the strong falls seen at the end of last week, which were unusual and possibly bolstered by official action to bring the Dollar down a little.

Assuming that Dollar bulls are now on watch for this action on any approach to 150, the pair may well struggle for traction to the upside in the near term, although exploratory upward forays remain likely, targeting that key psychological level. 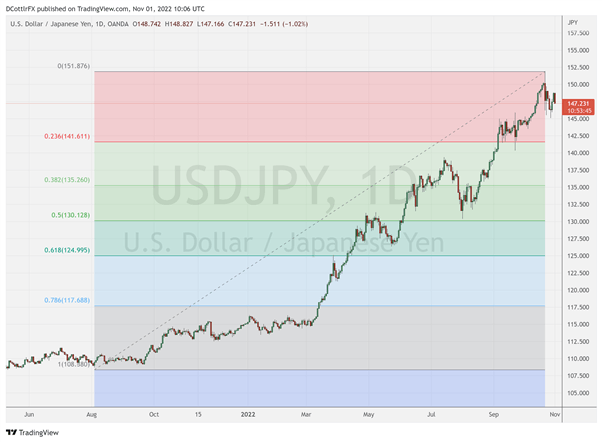 To the downside, meaningful support looks rather limited at current market levels, although a cluster of props from the trading action between September 6 and October 4 looks likely to guard the first, 23.6% Fibonacci retracement of the long rise up from the lows of August 2021 to last month’s historic peaks. That comes in at 141.611, the base of the red area on the chart, but the 142-145 region above it is likely to be sternly contested by Yen bears.

The market may return more durably to that region in a consolidation move before pushing on higher, however.

---By David Cottle For DailyFX