The country will have its 5th Prime Minister in just over six years hopefully revealed next week after Liz Truss gave back the keys to No.10 on Thursday after a tumultuous 44 days in office. The process of electing a new Conservative Party leader is expected to be finished by next Friday, October 28. Candidates need the backing of at least 100 Conservative MPs by Monday to stay in the contest.

The UK bookmakers are currently making Rishi Sunak (5/6) the favorite to win the election contest, closely followed by Boris Johnson (23/10) with Penny Mordaunt (13/2) in third place. The water is muddied though with Boris Johnson also under investigation by the Parliamentary Standards Committee for misleading the country over events he attended during lockdown. In addition, both Rishi Sunak and Penny Mordaunt want the top job and are unlikely to work together towards a unity party, leaving the possibility of a split opening the way for Boris Johnson to return to No.10. As always, nothing should be taken for granted in UK politics.

Away from the political scene, the UK economic data calendar for next week is light with only the latest S&P UK manufacturing, services, and composite readings of any real interest.

For all market-moving data releases and economic events see the DailyFX Calendar.

The British Pound has been under pressure over the past week as political events weighed heavily. The recovery from the spike low that saw GBPUSD trade just touch1.0350 is starting to wane, although this move has also been fueled by a resurgent US dollar. Failure to hold the prior swing low at 1.1420 has seen cable slide back to 1.1130 ahead of the weekend. The rest of the daily chart looks negative with GBPUSD below all three moving averages, while a bearish ‘death cross’ made on August 8 remains a block to any substantial move higher. Lower highs and lower lows complete the negative picture. 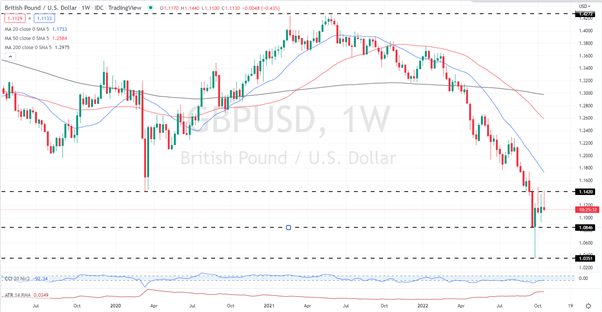