Chancellor of the Exchequer, Jeremy Hunt said today that UK energy price guarantees will only remain in place until April 2023, after which it will become capped and targeted, in the first of many government U-turns. The Chancellor also scrapped the plan to cut income tax by 1p indefinitely, adding that the government will ‘reverse almost all tax measures announced in the September 23 growth plan’. The Chancellor said these measures would raise around GBP32 billion. The Chancellor will set out his fiscal plans in greater detail later today in the House of Commons.

Sterling picked up further on these comments with cable back above 1.1300. 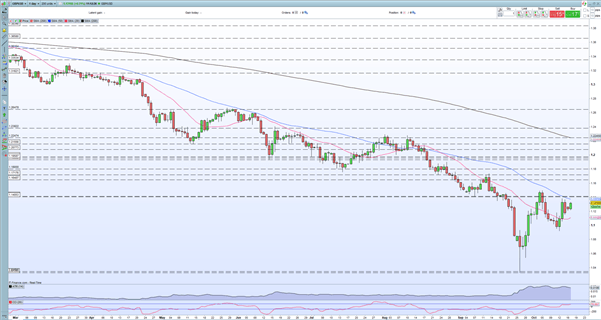 UK government bond yields fell further from their recent highs after the Chancellor’s announcement. The yield on the 10-year UK gilt is around 42 basis points lower on the session at 3.94%. The 10-year gilt opened 2022 with a yield of a fraction below 1%. 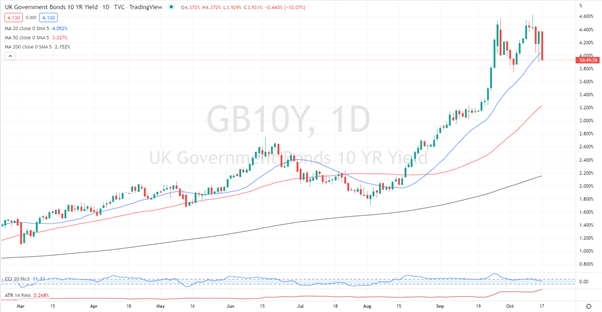 UK PM Liz Truss continues to come under fire from all sides of the political spectrum with her competency to rule the country being openly questioned. The sacking of the previous Chancellor, Kwasi Kwarteng, last Friday for policies that Truss herself decided on, was seen as throwing her neighbour at No. 11 under a bus, while today’s fiscal U-turn has enraged many senior conservatives. One senior Conservative MP, Crispin Blunt, said over the weekend that ‘if your confidence levels as a Prime Minster are in single figures, the position is, frankly, irretrievable’. UK bookmarkers have PM Truss as tight as 1/2 to have left No.10 before the end of the year.

We typically take a contrarian view to crowd sentiment, and the fact traders are net-long suggests GBP/USD prices may continue to fall. Positioning is less net-long than yesterday but more net-long from last week. The combination of current sentiment and recent changes gives us a further mixed GBP/USD trading bias.