The Yen’s struggles against the dollar continued in the Asian session as the pair has now printed a new YTD high. The pair has broken through the 145.900 area where the Bank of Japan stepped in with its first intervention since 1998. The resurgence in the dollar index coupled with a sustained dovish rhetoric from the BoJ is expected to keep the pair elevated unless a further intervention package is announced.

Bank of Japan (BoJ) Governor Haruhiko Kuroda in his forward guidance following last month’s meeting stated that there will be no change in forward guidance for two to three years. This dovish rhetoric has not helped the Yen as the currency remains the worst performer among its G10 peers this year. Yesterday we heard comments from the Governments chief spokesperson Hirokazu Matsuno who stated in a press conference that they will continue to monitor the FX market closely and take appropriate responses against excessive moves. This echoes the comments made following last month’s intervention with further intervention more likely should volatility Increase rather than at a particular price point. At the moment volatility around USD/JPY is at its lowest since March. 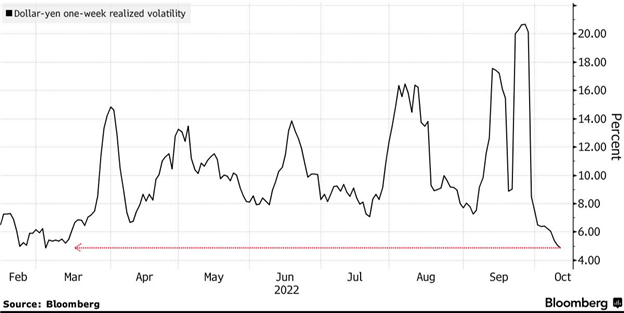 Yesterday we heard from US Treasury Secretary Janet Yellen whose comments on the greenback’s strength is expected to drive the rally further. Secretary Yellen stated that dollar strength is the ‘logical outcome’ of the different monetary policy stances by central banks globally. We have seen the dollar index reach multi-decade highs this year as the greenback’s appeal as a haven grew.

Later in the day we have US Producer Price Inflation (PPI) as well as the FOMC meeting minutes for September. The minutes should provide further insight into where members stand heading into the November meeting. Tomorrow however brings the much-anticipated CPI numbers which could see increased volatility in markets and prompt an intervention from the BoJ, while a lack of intervention could result in further weakness for the Yen.

From a technical perspective, we have now rallied some 640 pips from the lows following last month’s intervention. The break above the intervention high around 145.911 could see price push toward the 1998 high around 147.750. There will remain an element of caution amongst buyers as fears of intervention may stifle the pair heading into tomorrow’s US CPI inflation print. We currently trade above the 20, 50 and 100-SMA while the RSI is in overbought territory. It will be important to remain nimble at the moment as the previous intervention resulted in a 550 pip drop in a single day, which is likely to keep bulls on their toes.