The FTSE 100 remains vulnerable to downside risk as traders and investors eye key dates later this month. The Bank of England Governor Andrew Bailey confirmed that Friday marks the last day the Bank stands ready to intervene in the bond markets in an attempt to quell reports of the possibility of an extension. As discussed earlier by Nick Cawley in his GBP update, the end to the Bank’s support sets a target for those who wish to test the BoE’s resolve. UK central bankers’ jobs have been made even tougher after August GDP figures revealed a shock decline in growth – something the new Prime Minister is looking to tackle head on.

After calming the longer-dated UK bond markets via direct purchases by the central bank, the 30-year government yield in on course to test the recent high - around 6 basis points away at the time of writing – which may see the Bank step up efforts once more.

This week sees a number of noticeable companies reporting Q3 earnings with DS Smith getting the week started on the right foot while Barratt Developments, EasyJet and Mondi reveal their respective trading updates throughout the remainder of the week.

However, the week of the 25th of October is when the index heavyweights report on Q3 earnings and provide guidance on the Q4 outlook which is anticipated to be a challenging one. 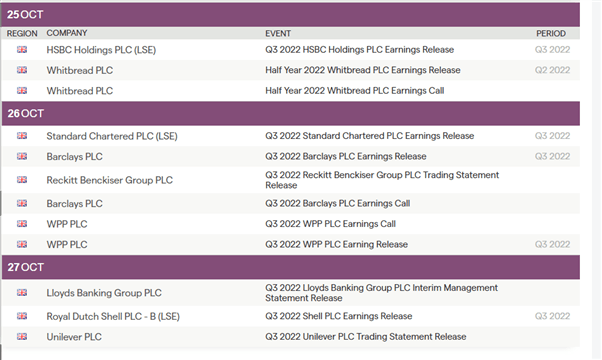 The daily chart shows the index continuing to trade lower despite last week’s BoE inspired turn-around. Prices tested the zone of resistance at 6940-6980 before heading lower. Failure to trade above the zone opens up the significant long-term level of 6750 where prices have pivoted on multiple occasions in the past. Rate hike odds reaching 100 basis points ahead of the Bank’s November meeting has added further pressure to UK equities this week even though such an aggressive move appears unlikely given the recent instability in UK financial markets. 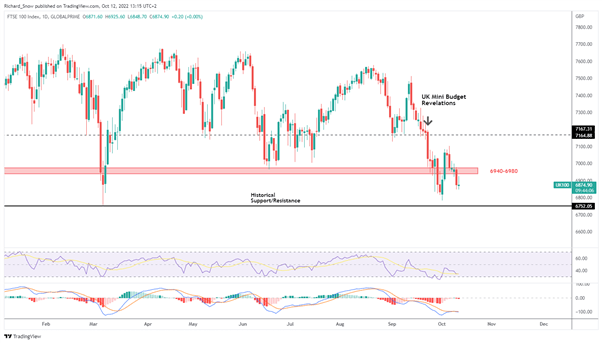 The weekly chart shows the importance of the 6750 mark over time. The level prevented declines in 2021 but a barrage of negative UK fundamentals could see a breakdown below the marker. Dissatisfaction from within PM Truss’ own party may lead to concessions regarding the Prime Minister’s fiscal plan, which ultimately, would give the index a much-needed boost even if temporary. 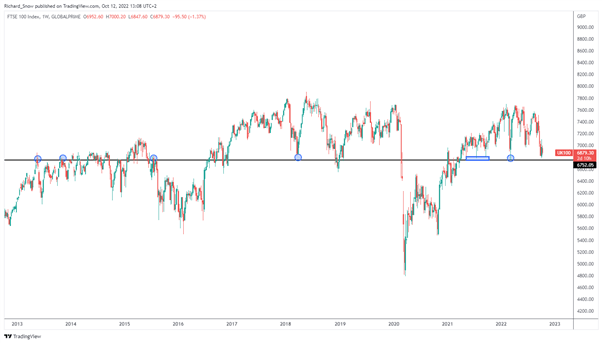