EUR/USD Dips Below Parity with Dollar Index Leading the Way

EURUSD surrendered parity once more in early trade, failing to take out Fridays high. We saw the USD index open higher and push on facilitating a +/-60 pip drop on EURUSD and other dollar pairs, while markets appear cautious as US President Joe Biden declared the US military would defend Taiwan in the event of an invasion by China.

The dollar index seems to be the driving force of the move lower in EURUSD this morning as indicated on the currency strength chart below. The index continued its push higher despite a slew of investment banks as well as the World Bank downgrading their growth forecasts for the US economy and warning of a global recession. Goldman Sachs being the most recent of these, downgraded the US GDP forecast for 2023 to 1.1% from a previous estimate of 1.5%. The bank stated that increasing risks from tightening policy is expected to see liquidity sucked out of the market. 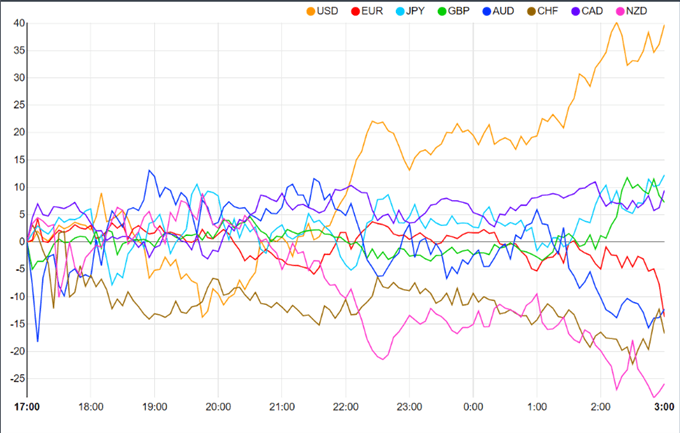 FOMC Meeting and its Implications for EURUSD

The US Federal Reserve meeting this week should set the stage for the fourth quarter as markets wait with bated breath. The implications from the meeting will be felt across global markets with the Fed leading the tightening cycle, while remaining in a better position economically than some of its peers. The meeting this week is expected to see a further 75bp hike delivered, however most of this hike is priced in, it will be the minutes of the meeting and the speech by Chair Powell which will pique interest. A continuation of hawkish rhetoric and forward guidance seen recently could push the euro further into the doldrums heaping further pressure on the European Central Bank (ECB).

As things stand there is an 80% probability of a 75bp hike while there remains a 20% probability for a full percentage point. Given the increasing pace of some of its peers and the recent CPI print a 100bp move would be a huge statement, something I fear the ECB will not be able to match. The ECB has been to optimistic about its economic outlook and I for one do not see them able to maintain the current pace of hikes, let alone increase to 100bp. 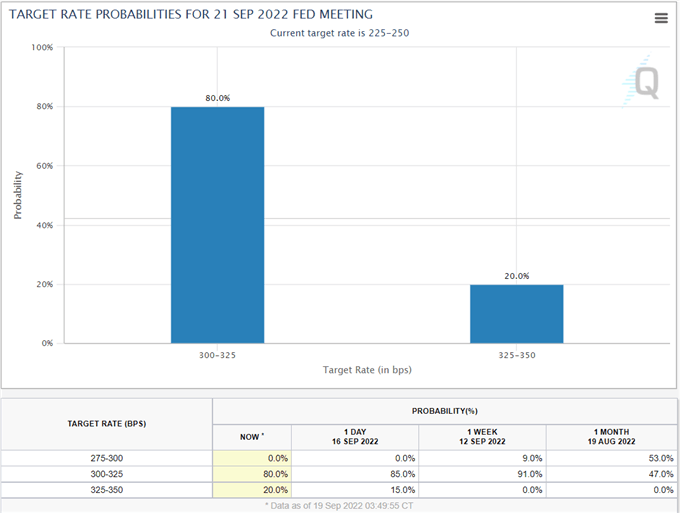 Should the Fed deliver a 75bp hike on Wednesday coupled with bullish forward guidance and a year-end rate higher than 4.25%, I expect dollar bulls to take charge and drive EURUSD lower. Alternatively, should we get a 75bp hike followed by dovish comments and a year-end rate target around the 4.00-4.25% we should see EURUSD rally higher.

From a technical perspective, we had three bullish days in a row to close out last week and yet still closed bearish for the week. A clear sign of sellers still in control on the pair with any upside seen as nothing more than a relief rally. As we stand the key intraday level rests at 0.9950 with a break lower opening up further downside toward 0.9900. I do not see momentum at this moment for the pair to challenge the YTD lows, however the FOMC could be the catalyst for a break lower. We currently trade below the 20,50 and 100-SMA which should provide resistance for any rally to the upside. There is a strong possibility that we remain rangebound between 0.9900 and Friday’s highs around the 1.004 area until the FOMC decision on Wednesday.