The Japanese Yen remains close to 24-year lows against the US Dollar on Tuesday even as some of its major international rivals enjoy a more forceful bounce, with an increasing drumbeat of Japanese officials suggesting that weakness may now have gone beyond what can be justified by fundamentals.

Of course, the wide interest-rate divergence between the Federal Reserve and the Bank of Japan has been in play for months. It remains the key driver of events in this market. However, the Japanese authorities have been forceful currency interventionists in the past, and markets are on alert for any return to this form.

More broadly the market awaits US Consumer Price Index data for August, due in the European afternoon. Core inflation is expected to have ticked upward, to 6.1% from 5.9%, but the overall rate is expected to inch down, and there is palpable hope that the worst of US inflation may be behind us. However, that’s not guaranteed and none of this is to say that the Fed won’t continue to raise interest rates aggressively. It will certainly do so far more aggressively than the BoJ in every imaginable case. A stronger-than expected print would suggest a return to US dollar strength.

Japan’s deputy chief cabinet secretary said on Sunday that Tokyo must take steps as needed to counter excessive declines in the Yen. His voice was part of a gently rising chorus which in recent days has included Bank of Japan Governor Haruhiko Kuroda. He reportedly described last week’s Yen moves as ‘very sudden.’ Perhaps most importantly, Finance Minister Shunichi Suzuki had already said that ‘the necessary action’ would be taken if the Yen continues to depreciate. The Ministry of Finance would be the institution pulling the trigger should intervention in the foreign exchange market take place.

The government is also considering relaxation of travel restrictions in order to boost tourism and boost the Yen through that channel. 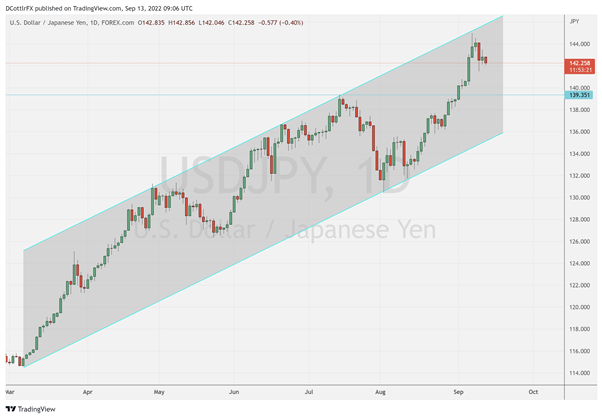 The wide USD/JPY uptrend channel from early March remains resolutely in place, with the downside test made in mid-August only providing a platform from which Dollar bulls have scaled those 24-year peaks. Clear support is hard to spot before July 14’s intraday high of 139.37, a very long way below the current market. This corresponds quite closely with the first Fibonacci retracement of the overall rise from March. That comes in at 138.50.

To the upside a retest of the channel top also looks unlikely, at least in the short term. That comes in at 146.100, a possibly significant level given how often this channel top has endured attempt to break above it.

-By David Cottle For DailyFX