Dollar denominated commodities have received a boost ahead of the US CPI print as the dollar (DXY) continues to sell off. Should the CPI print in line with forecasts (8.1%) it would represent a 0.4% decline from last month’s print and the second successive monthly move lower in US inflation.

Markets have seemingly already anticipated lower CPI data which has added to the current counter trend move in the broader commodity landscape. Cooling inflation leads to speculation of a ‘Fed pivot’ whereby the FOMC may eventually communicate its intention to reduce the pace and magnitude of future rate hikes.

Despite statements form the Fed Chairman Jerome Powell and other prominent Fed members stating that there needs to be “compelling evidence” of cooling inflation before considering a change in approach, the narrative of a Fed pivot previously gained traction before being quelled by a barrage of Fed speakers reaffirming their rate hike stance.

Nevertheless, we could see a return of the Fed pivot narrative on lower inflation as the Fed are unable to respond to whispers of slowing rate hikes and an earlier end to contractionary monetary policy due to the customary blackout period ahead of next week’s FOMC meeting.

Gold appears in track to print a third successive day of gains and has overcome the 1722 level of prior resistance; however, a daily close will be more telling. Prior days’ upper wicks around 1722 suggest that a bearish retracement of the short-term move is still possible. In that event 1722 remains as nearest support, followed by 1676.70 (prior pivot point).

On the upside, a sizeable move would be needed to approach the 1774 level and the psychological 1800. 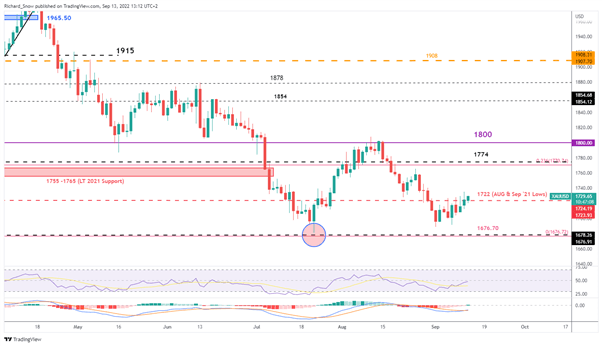 The 1-hour chart reveals a bullish bias heading into the US CPI print as gold prices have more than clawed back gains from the Asian session and gear up for a retest of 1735 after bouncing off a short-term zone of support around 1719. 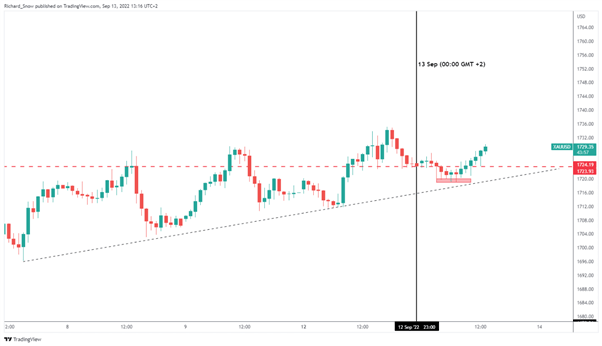 The CPI data is the last of the major data prints before next week’s FOMC decision and could set the tone for price action in the lead up to the event.