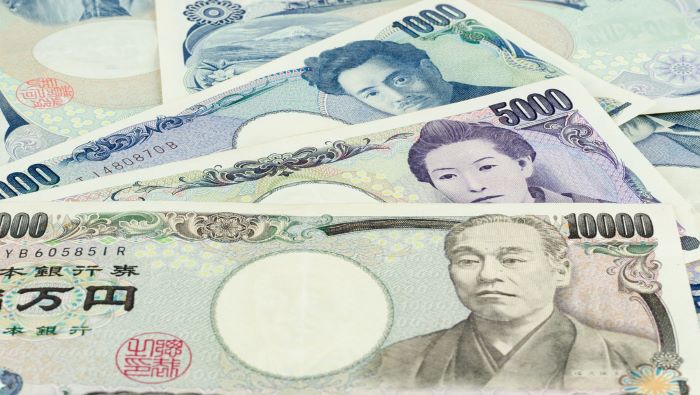 The Bank of Japan (BoJ) and finance ministry held talks on Friday with a focus on “domestic, overseas economic and market developments”. Concerns around the yen’s rapid moves have been voiced since the conflict in eastern Europe began earlier this year and thus far, no concrete solutions have been agreed upon.

Nevertheless, continued jawboning has kept markets on their toes as USD/JPY cruised past 120, 130 and now 140 with no real resistance. Markets continue to wait decisive action from the BoJ to halt yen declines but it would appear as if the situation is perceived as tolerable. The BoJ remains the last of the major central banks to maintain an accommodative monetary framework as the wave of aggressive rate hikes continue throughout the rest of the world. Global sovereign yields also continue to soar while the Bank remains committed to capping yields on its 10 year security at 0.25%, while the US sits around 3.3%.

Statements after the meeting suggest that prime minister Kishida made no specific requests of Kuroda. The meeting was described as an occasional catch up to discuss broad economic and financial matters. Kuroda did however express concern over rapid moves in the FX space – which he describes as 2-3 yen moves in a day. The rapid moves are seen by the Bank as undesirable as they make it difficult for businesses to forecast and do business.

USD/JPY reveals a sizeable drop on Friday, mainly due to a softer US dollar. The softer dollar is rather unusual given Jerome Powell continued the Fed’s hawkish tone yesterday. Dollar pairs across the board are experiencing what looks to be a short-term reprieve from the otherwise unrelenting dollar.

The drop appears to reveal the emergence of an evening star formation – a bearish reversal pattern, raising questions if we have just witnessed a peak in USD/JPY. Widening interest rate differentials would suggest that is not the case and so this could also merely be an opportunity to engage in ‘dip buying’ for those looking for a bullish continuation. 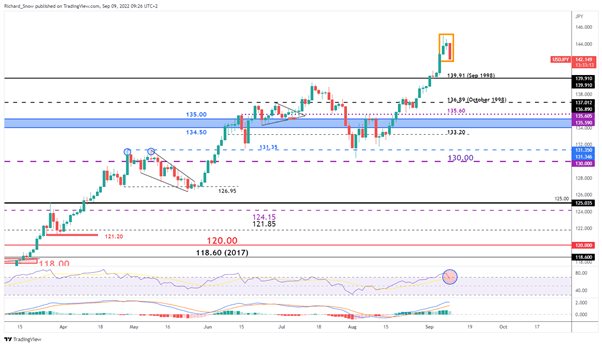 The chart below highlights the divergence between the US and Japan when it comes to yields. Higher yields tend to support currency valuations and the continued divergence only adds to higher USD/JPY valuations as long as the Fed maintains its hawkish tone. 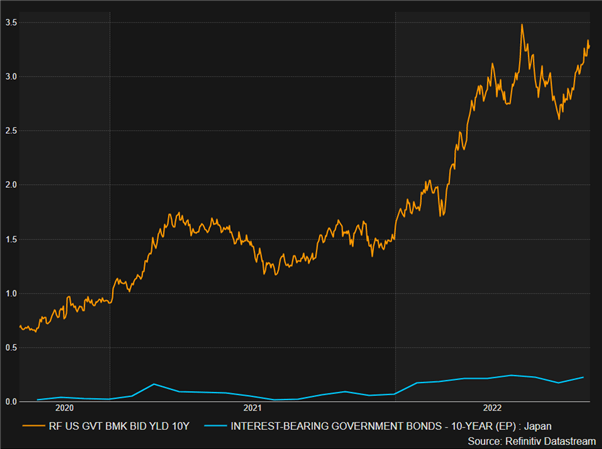 Main Risk Events on the Horizon

On Tuesday we see inflation data out of the United states however, even if we continue to see softer data prints, recent hawkish sentiment by the Fed suggests that more is needed to bring inflation down. We then see consumer related data via US retail sales and Friday's Michigan consumer sentiment preliminary data for September. Recent consumer sentiment data has revealed a positive turn around in these state of the US consumer as prior prints tracked higher - above the 50 mark - reflecting the effect of lower gasoline prices on consumers’ economic expectations.