The euro found some support this Friday after it was announced the Nord Stream 1 pipeline which was shut down for “maintenance” purposes will restart operations into Europe – albeit at 20% capacity. The morning kicked off with German balance of trade data which showed signs of fatigue as high energy costs plague the region.

PPI data for the eurozone helped prop up euro bids (increasing hawkish pressure) but the spotlight for today rests firmly with the U.S. via the Non-Farm Payroll (NFP) release later this afternoon. Estimates sit at 300k but even a slight miss around 200k should keep the U.S. dollar steady as a 75bps rate hike from the Fed looks likely. 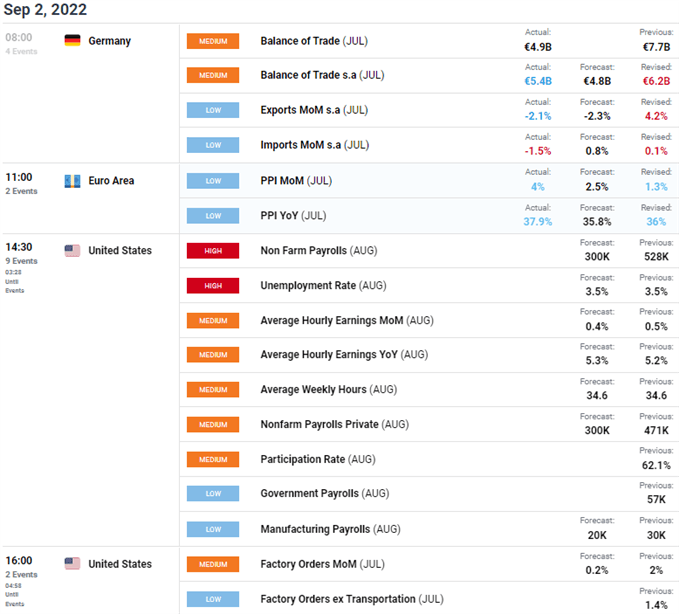 Money markets are pointing a 70bps interest rate hike next week which is significantly higher than prior market pricing. We have seen several European Central Bank (ECB) officials favor front loading which has led to the current aggressive outlook which likely stemmed from the Jackson Hole Economic Symposium. Inflation is now the primary focus for central banks and the ECB has finally opened its eyes after falling behind the curve for some time. It is a difficult time for the ECB as the winter months approach and calls for a recession are highly probable. The ECB are obviously aware of this but need to take necessary steps to quell inflation while pushing the region into recessionary territory (although not too far). 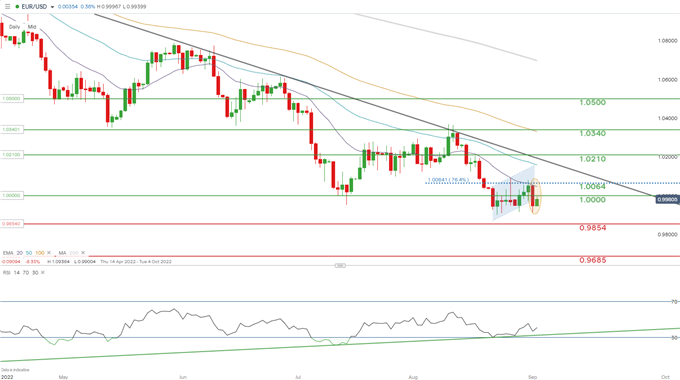 Technically, the EUR/USD daily chart above has some interesting indications. The first area of attention comes from yesterdays confirmation close below the bear flag chart pattern (blue) which traditionally points to a bearish continuation exposing the 0.9854 December 2002 swing low. In support of a further downside move, I have highlighted a possible inside bar candlestick pattern (yellow) with technical analysis theory suggesting bearish continuation should the candle close in this fashion.

IGCS shows retail traders are currently LONG on EUR/USD, with 69% of traders currently holding long positions (as of this writing). At DailyFX we typically take a contrarian view to crowd sentiment however, recent changes in long and short positions have resulted in a mixed bias.